Showa Denko and others set up new production and sales footholds A shopper picks up a can of beer at a shop in Hanoi. Japan’s Showa Denko will invest about $64 million to boost its aluminum beverage can and can lid production capacity in Vietnam.   © Reuters
MASAYUKI MIYAKE, Nikkei staff writerMay 23, 2019 15:12 JST | Southeast Asia
CopyCopied

TOKYO -- Japanese companies are stepping up their business in Southeast Asia to cash in on the region's growth. This time they are pouring investment into food and beverage containers.

Showa Denko will invest 7 billion yen ($63.9 million) to boost its aluminum can production capacity in Vietnam, while Hokkan Holdings has started manufacturing and selling beverage containers in Indonesia through a joint venture with a local maker.

The Southeast Asian food market is expanding. Annual processed food sales in six major countries are projected to surge to $92.1 billion in 2023, according to U.K. research company Euromonitor. That is about 30% more than in 2017.

That means demand for cans and cup containers, which make for easy storage, is also picking up. Japanese materials makers are looking to benefit by establishing local production and sales footholds.

Showa Denko will build its third can-manufacturing plant in Vietnam in the southern province of Ba Ria-Vung Tau through its subsidiary, Showa Aluminum Can.

The new plant will have an annual production capacity of 1.3 billion cans, and is scheduled to go online in July 2020. It will lift Showa Denko's total manufacturing capacity in Vietnam to 3.1 billion units annually.

The company will supply aluminum cans primarily to beer makers. Brewers are shifting to cans from bottles in Vietnam, largely because they are easy to carry and store in refrigerators.

Showa Denko will also add a new can lid production line to its existing plant in the northern Vietnamese province of Bac Ninh. It will increase annual lid production capacity by 1.1 billion units to 3.3 billion units. The company will consider further expanding its facilities in Vietnam.

Showa Denko's current midterm management plan sees the overseas expansion of the aluminum can business as a key area of growth.

In Thailand, an aluminum can manufacturing plant built as a joint venture between Showa Denko and local beverage maker Carabao Group started operation in December 2018.

The Thai plant has an annual production capacity of about 1 billion cans. It produces aluminum cans for the Thai partner company's beverage products. 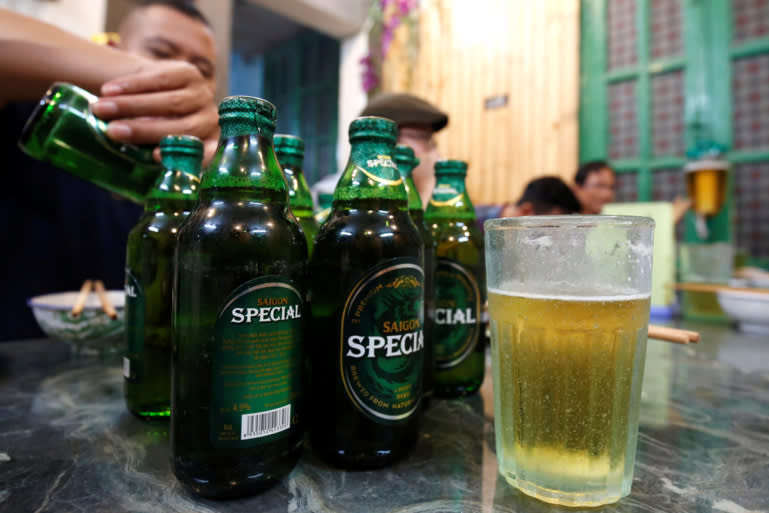 Vietnam is one of the world's youngest and fastest-growing beer markets.   © Reuters

The new company acquired DPI's assets, such as factories and trademarks, for about 9.5 billion yen and started operation in April 2019. It makes plastic bottles and cup containers for sale to local beverage makers and other customers.

Indonesia is the world's fourth-most populous country with over 200 million people. Hokkan Holdings considers it an important market.

Toyo Seikan Group Holdings upgraded its office in Singapore to expand its container business in Asia, and it has sent several staff members there from its headquarters in Japan.

The Singapore branch serves as Toyo Seikan's base for market research and business development in the region.

Container demand looks set to grow only at a sluggish pace in Japan as the population shrinks and ages. Japanese manufacturers have to expand their presence in the promising Southeast Asian market to survive.