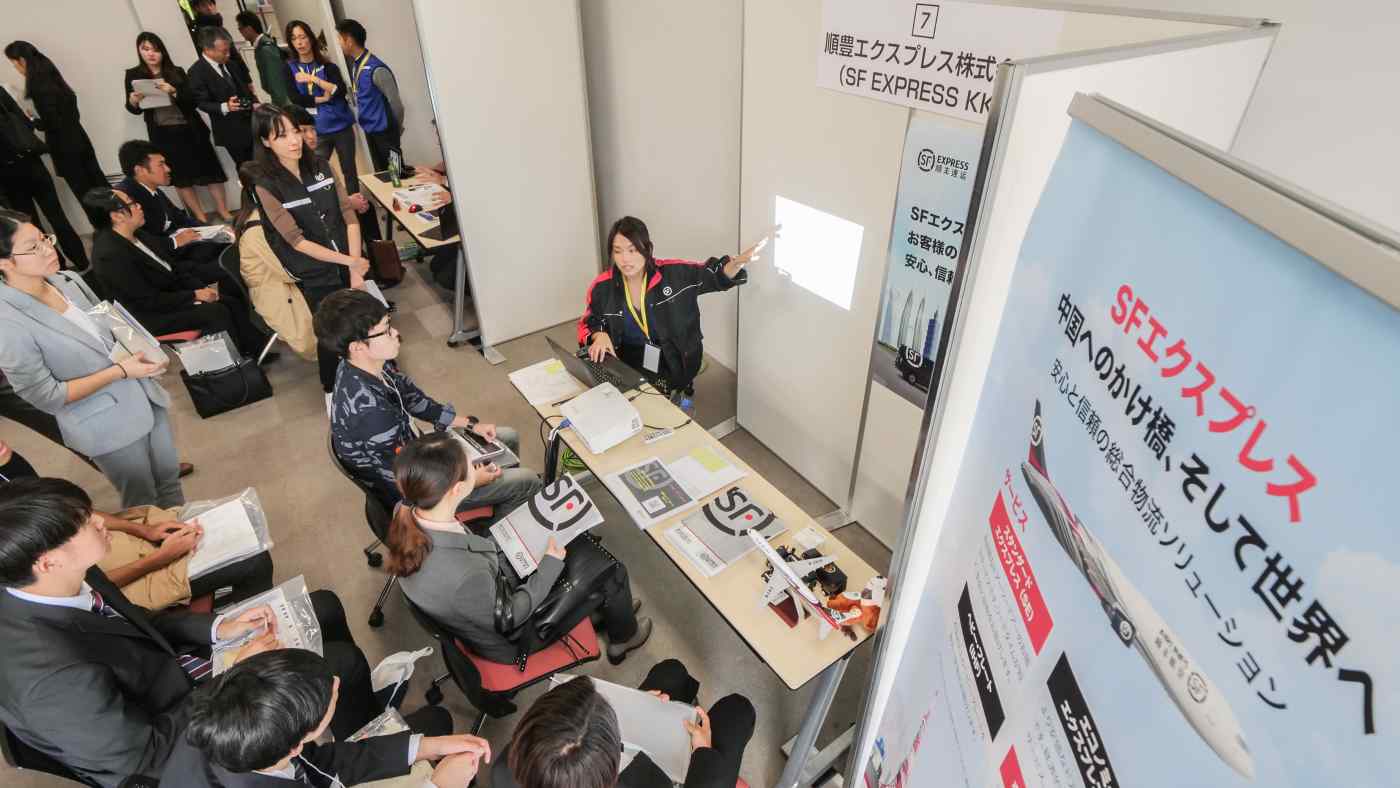 A total of 14 companies and 25 Chinese universities participated in the events, along with an organization that administers a Beijing-approved Chinese-language proficiency test that is crucial to those looking to live and work in China.

The draw? Dreams of climbing the corporate ladder in the world's second-largest economy. Opportunities abound, but the hurdles are high. Despite the obvious need for language fluency, China keeps a tight grip on work visas, which typically are issued only to those with proven work experience.

According to fair organizers, Japanese students regard Chinese companies highly. Many are attracted by the prospects of working at a satisfying job in a large, fast-moving corporation. Others like the global reach and growth opportunities of Chinese companies, the organizers said.

A 21-year-old third-year university student commented on the fair, saying, "I like that I can get information about Chinese companies that is not available on job-search websites."

Her interest in China was piqued after becoming acquainted with a Chinese student at her university. She eventually studied in the country for a year and a half before returning to Japan. "By working at a Chinese company, I can contribute to the building of good Sino-Japanese relations," she said.

According to brochures distributed by organizers, salaries at Chinese and Japanese companies are roughly the same.

The interest between companies and fair visitors is mutual, as China Inc. needs Chinese-speaking Japanese to help with their operations in Japan. Logistics service provider ECMS is a case in point.

The Japanese subsidiary of ECMS was a first-time participant in the fair, looking to recruit personnel to run proprietary Chinese-language systems to liaise with headquarters and customers in Japan. "Although we prepared more leaflets than we thought we'd need, we ran out," said an employee. "We're surprised there are so many students looking to join international companies."

A representative from a company that has participated in all four fairs since 2016 noted a change in visitors. "The participants at past fairs were mainly Chinese students studying in Japan. But the situation has changed, and we're seeing more Japanese," the person said.

The company has hired Japanese staff every year. Another official said, "We've already received [job] applications from several people who saw us at the event."

Tatsuwo Moriyama, a 43-year-old author and lecturer on finding overseas employment, said, "With booming sales of Alibaba [Group Holding] now a hot topic and Huawei smartphones in so many stores, Japanese have become very familiar with Chinese companies," he said. "I think that Japanese students' image [of Chinese companies] has also changed, making the companies more attractive as employers."

Besides the obvious language barrier, there are other considerations for would-be employees. Large Japanese companies typically spend a long time grooming new recruits. But Chinese companies usually want plug-and-play personnel, a fact that has discouraged some. A 20-year-old third-year university student at the fair said, "Many [Chinese] companies are keen on applicants with IT skills and other qualifications that I don't have. This is making it difficult to find a position."

Even when Chinese companies recruit new grads, the jobs are often specialized, limiting the number of qualified applicants. And Japanese graduates looking to move directly to China fresh out of university face highly restrictive visa requirements in a three-tier, point-based evaluation system: Tier A is for high-level corporate or academic types; Tier B targets university-educated specialists with at least two years of work experience; and Tier C is for all others.

Tier A and B visa holders can reside in China, with some limitations, while Tier C holders are limited to stays of 90 days or less. 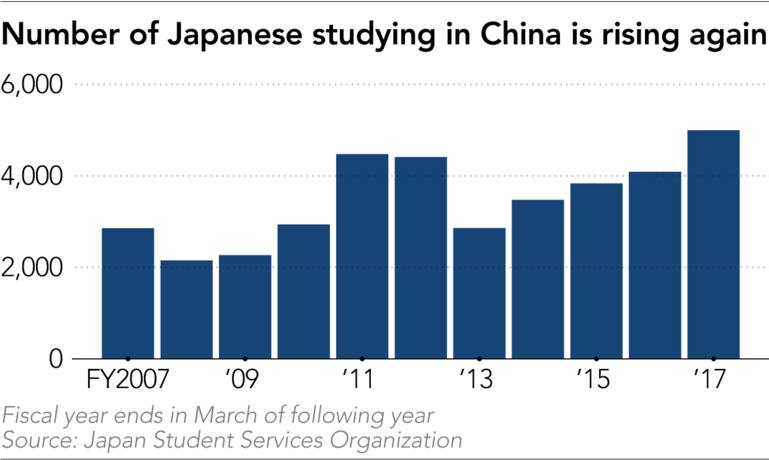 As regards to fresh graduates, Moriyama said: "I think finding jobs at Japanese subsidiaries of [Chinese] companies ... is the start point to eventually working in China."

A fourth-year university student in Chiba Prefecture who has her sights set on China seems to support this assessment. Even though fluent in Chinese and having spent nine years in the country with her family, she knows her chances of getting a Tier A or B visa right out of school are slim. "It's really difficult to obtain a work visa, so I've given up on the idea for the near future."

She intends to first work in Japan at a financial institution until she can meet the work visa requirements, then make a career move to China.

Meanwhile, increasing numbers of Japanese are choosing to study at universities in China, with Chinese language being a popular degree goal. According to the Japan Student Services Organization, 5,000 Japanese were studying in China in fiscal 2017, up 70% from 10 years earlier. This accounted for 7.6% of Japanese studying overseas, making China the fourth-most popular destination after the U.S., Australia and Canada.

The number of Japanese students in China has generally grown, but rises and falls depending on which way the political winds blow between Tokyo and Beijing.