From sushi to tempura, local delicacies are increasingly made by machines TOKYO -- At lunchtime, the Sushiro restaurant near Tokyo's Ogikubo train station is packed with families, couples and business people, but one thing is missing: staff.

Instead of receptionists, diners use a touch panel to find a table. At their seats, they navigate a tablet to order from a menu spanning some 130 items including sushi, ramen noodles, fried chicken and hot coffee. The dishes are delivered directly to the table via a conveyor belt. A self-serving register awaits them on their way out.

Staff can be found inside the kitchen, where they tirelessly churn out as many as 1,500 dishes per hour. But instead of skilled sushi chefs, many are young foreign part-time workers who have never eaten sushi in their home countries. Their lack of experience is complemented by a dazzling array of machines that mold rice, boil noodles and tell humans what to make next. Using big data, Sushiro's system predicts how many customers will come in the next 15 minutes and what they will order.

For decades, conveyor belt sushi chains have embraced robots to deal with high fish prices. Now, as rising part-time wages and sluggish consumer demand cut deep into margins of restaurants operators, they are emerging as a role model for Japan's $213 billion restaurant industry. Chains serving tempura, beef bowls and other Japanese cuisines are racing to replace humans with machines.

"Among the retail and service sectors, the restaurant industry is the most sensitive to rises in part-time labor costs," said Ryozo Minagawa, an analyst at Nomura Securities. "Conveyor belt sushi chains are an exception. They are less restaurants than they are food factories with a retail element."

Some hope Japan will become a global leader in restaurant automation at a time when labor shortage is pushing fast food chains around the world to turn to robot burger-flippers and coffee baristas. Others fear that it will strip away Japan's human touch -- its relentless pursuit for skill and hospitality -- that has gained fans all over the world.

"No plans to raise prices"

Sushi was once a coveted cuisine in which shokunin, or artisan chefs, carefully catered to customers behind wooden counters. That changed with the invention of the sushi conveyor belt in 1958, which made it possible to serve sushi to many people at low prices. The industry flourished in the 1970s, and grew even more efficient with the invention of the shari (sushi rice) robot by Suzumo Machinery. With multiple improvements, the robot -- which costs about 1.4 million yen ($12,000) -- is now small enough to fit in a household kitchen and can churn out 4,800 sushi rice bases in an hour.

Such developments have fueled the growth of Sushiro Global Holdings, Japan's top sushi chain operator, which runs more than 500 outlets. The company has previously focused on suburbs to maintain its 100 yen per dish menu, but advances in technology have made the business model economically feasible even in cities with high rental costs. The store in Ogikubo, which opened in September, is the fifth store in metropolitan Tokyo.

Sushiro this month reported revenue growth of 12% to 174 billion yen ($1.53 billion) over the year before, while net profit rose 15% to 7.9 billion yen. That growth makes it among a handful of restaurant operators that has managed to boost earnings. Investors have cheered it on -- its stock price has climbed about 70% over the past year.

CEO Koichi Mizutome, a former Japan Airlines executive, unveiled plans to invest 10 billion yen in the next three years to expand abroad, eyeing markets in Southeast Asia and the U.S.

"Like Sony and Panasonic, we want to build a Japanese brand that you see no matter where you go," Mizutome told a news conference.

Japan's population is declining at an unprecedented rate due to an aging society, causing panic among industries that rely heavily on part time workers. Average part time wages for food-related sectors in Japan's major cities hit 1,000 yen ($8.90) per hour, according to job search company Persol Holdings -- the highest level since it began tracking the data in 2013. In September it rose further to 1,008 yen, 3.5% higher on the previous year. Minagawa of Nomura estimates a 3% annual rise in part time wages can shave the operating profit of fast food chains by up to 20%. 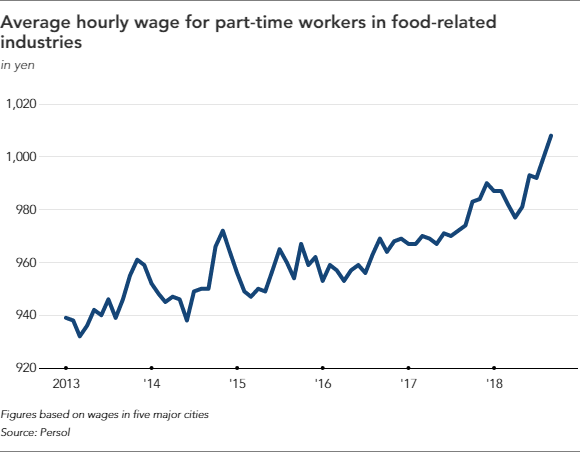 Companies in other industries, like logistics, have dealt with the crunch by raising prices. That has hardly happened in the fast food industry, where chains are afraid of losing customers who have become accustomed to cutthroat prices during decades of low economic growth. Inflation remains subdued -- the consumer price index, excluding volatile food, rose 1.0% in September, a far cry from the Bank of Japan's 2% target.

Torikizoku -- a discount chain serving skewers -- was hailed by analysts when it raised the price of a meal, once a flat 280 yen ($2.56) plus tax, to 298 yen last October. But when it triggered a major exodus of customers, the move has become a cautionary tale. Yoshinoya Holdings President Yasutaka Kawamura revealed he has "no plans at the moment" to raise prices, showing his determination to stick to its signature 420 yen ($3.70) beef bowl.

The result has been an industrywide squeeze on profit margins. For the year ended in July 2018, Torikizoku's profit fell by 32%. Yoshinoya Holdings, a major gyudon beef bowl restaurant operator, in late September reported a net loss of 850 million yen ($7.5 million) for the second quarter ended in August. Saizeriya, the Japanese operator of a chain of affordable Italian restaurants, saw its net profit for the year ended in August 2018 drop 32% to 5 billion yen ($44 million) -- the first fall in 4 years. President Issei Horino cited "soaring prices of human labor" for the downturn.

Buyers of Suzumo's robots increasingly include these non-sushi chains. Tempura and beef bowl chains use rice dispensing robots, for example. And the list of tasks being automated is growing too. Yoshinoya plans to switch 40% of its stores to a self-service restaurant where the customers will order at the register and carry their food to the table themselves.

The trend is not limited to fast food -- even restaurants that take pride in hiring skilled chefs are starting to turn to machines. Kisoji, which runs a chain of Japanese cuisine restaurants, is gradually deploying robots to cook everything from rice, steamed egg custard, to deep fried seafood.

"We don't think we will be increasing the number of employees," said one official at the company. "The wave (of automation) is already coming, and we don't want to be behind the curve."

Not everyone is betting on automation. "In restaurants, artificial intelligence and machines will not replace humans as quickly as in other industries," said Hayato Takahashi, president of ClipLine, which runs a video and social networking platform for store staff that aims to disseminate expertise, and improve training and customer service. "There are so many different tasks, which change every few months once the menu changes. Humans are still very valuable because they can adapt without making critical mistakes."

According to a report by Persol and Chuo University, Japan will have a shortage of 6.4 million workers in 2030. More than half the gap can be plugged by greater participation of women, the elderly, and foreigners in the labor force.

Still, the report said, the biggest solution to the shortage will be automation and the increased productivity it brings.

Equipment makers say even Sushiro has a long way to go before it can replace all of its human staff. Placing pieces of seafood on the rice is still a process that has to be done by humans, due to the difficult task of identifying different sizes and textures. But eventually, said Tetsuya Oneda, managing director at Suzumo, this might be done by machines in the "the short-to-medium term."

"The industry is definitely heading toward automation," he said. "There was always a debate about which part of the process is done by human, and which part by machines. The machine portion is getting bigger."