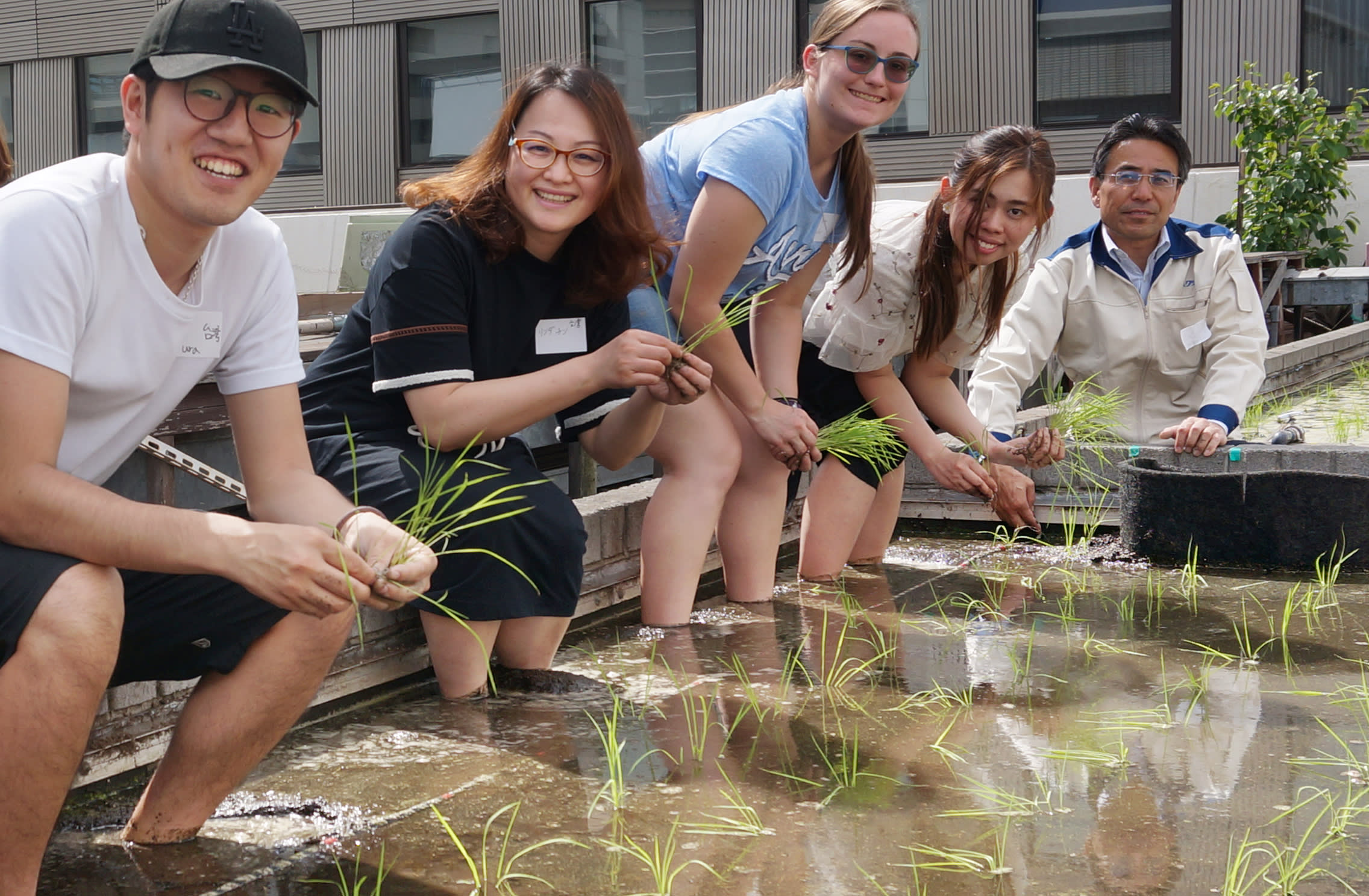 While the domestic consumption for sake keeps falling, the industry has seen a continuous rise in exports. However, exports remain only a fraction of the total production, leaving ample room for further expansion.

The industry is taking advantage of the rise of tourism in Japan, dragging visitors to their breweries, or even to their own farms, to inspire greater sake enthusiasm. The inclusion of sake on the list of tax-free items for foreign tourists since October 2017 is also accelerating interest.

Florian Hell, a 26-year-old student from Switzerland, recently set out rice plants for the first time in his life. He participated in a rice planting demonstration event in June held by Japan's largest sake brewery, Kobe-based Hakutsuru Sake Brewing, which is for the first time targeting foreigners.

Under the beating sun, Hell and twenty other participants gathered at the roof farm of the company's building in Ginza, the center of Tokyo with a magnificent view of Tokyo Tower and Tokyo Sky Tree. They lined up next to each other and bent down in the mud, planting rice little by little at each spot by stepping forward.

The demonstration was followed by a lecture on sake production. The rice being planted, Hakutsuru-nishiki, was invented by the company from Yamada-nishiki, one of the best sake rice types in Japan. Two little rice balls were served to participants, one made from normal white rice and the other from Hakutsuru nishiki, to understand the hard "rubber-kind taste," according to a participant, of sake rice. Three different types of water, each containing a specific concentration of minerals, were also served to demonstrate the best-matching water for sake, which the brewery contends springs from Mt. Rokko in Kobe.

"I like sake but I only have it when I go to Japanese restaurants," says Hell. "I understood that rice and water, two components, are necessary to make the best sake."

Satoru Matsushita, deputy general of Hakutsuru's sales department, says the demonstration is intended to attract "those who are interested in sake but have not tasted enough, so that they will enjoy sake with much more personal experience." The company seeks to continue to hold similar annual events targeting foreign visitors.

In Japan, domestic sake consumption has fallen to 537,000 kiloliters in fiscal 2016, one-third of the level from its peak nearly 40 years ago, according to the National Tax Agency.

Although its exports have increased to 23,500 kiloliters in fiscal 2017, or about 18.7 billion yen ($168 million), with eight consecutive years of increase, the amount is only about 4% of total consumption.

"Sake is yet to spread overseas, as it is mainly consumed at Japanese restaurants rather than at home," says Shuso Imada, general manager of Japan Sake and Shochu Information Center. "That is why the industry intends to raise potential ambassadors of sake, making use of this swell of the number of international visitors." Japan has welcomed nearly 16 million tourists in the first half of 2018, the highest on record and up 16% from last year, according to the Japan National Tourism Organization. Hakutsuru and other companies in the industry are seeking to improve export numbers through these visitors, aiming to increase sake interest and consumption in their home countries.

The change in taxation has also benefited breweries. The program, launched last October, waives the 86.4 yen liquor tax and 8% consumption tax when tourists purchase a 720 ml bottle of sake from a government-designated tax-free shop at a brewery -- to spread foreign visitors into rural areas and raise recognition of local brands.

According to NTA, the number of such breweries has reached 122 in April, 2.5 times more than when the program began.

Breweries are also increasingly trying to improve their presentation to foreign visitors.

"Not the production process itself, but something unique to your brewery is what tourists are searching for," says Tyler Palma, Tokyo office manager of U.K.-based Japan specialist tour operator Inside Japan Tours. Palma gave a lecture at a Sake Destination Seminar organized by JSS Makers Association in late June. Around 70 participants, mainly from breweries all over the nation, took notes on possible improvements.

Explaining from the point of view of travel experts, Palma says foreign tourists expect to taste sake during their trip, either at a brewery tour or an izakaya, a Japanese pub, tasting at different temperatures, pairing sake with Japanese cuisine, and paying with credit cards. He also advised brewers update regularly their brewery's photos and contact information on Google maps.

"We tend to present in detail the production itself," says participant Koji Nishimura, manager of corporate development in Kobe Shushinkan, another sake brewery in Kobe. In its brewery tour, the company plays a video with descriptions of production procedure, in four languages. "But interest of visitors seems to be a more personal-oriented activity. Improving their convenience is also important."

A move to support restaurateurs serving sake to foreign visitors has also started. Nanatsuboshi offers an app which helps foreign visitors choose their favorite sake with an English description. (Photo courtesy of Nanatsuboshi)

The system, targeting mainly small-sized izakayas, works as an app on an English sake menu of the restaurant, indicating names of the sake and the brewery, price, cold or warm, fruitiness and fragrance, and dishes of the restaurant which match well. Visitors can choose their favorite sake with a tablet or a smartphone, helping restaurant owners and employees who do not have enough knowledge or manpower to explain sakes in English.

More than 6,000 sakes are listed in its cloud based system, among which eateries can choose the ones they serve at their own place. Nanatsuboshi started to sell the system from August 25. It aims to sell a pay version, with a wider range of sake to be presented on the menu, to more than 100 restaurants by the end of the year.