Japanese workers take only half their paid vacation, survey finds

Legal change may force more time off, but altering attitudes will be hard TOKYO -- Japanese workers took the fewest paid holidays among 19 countries and regions, and only half the time off to which they are entitled, according to an annual survey published Monday by online travel agency Expedia Japan.

With a new law taking effect in April 2019 requiring employees who are due 10 days or more of paid vacation to take at least five days off per year, Japan's workaholics may be forced to put up their heels a bit longer. But changing business-before-pleasure mindsets will not be easy.

"The revised law may help Japanese workers take more paid holidays, at least on the surface, but many may feel awkward taking more days off since the government decided to create a 10-day Golden Week holiday in late April and early May," said Keizo Ishii, head of Expedia Japan. Next year's longer holiday was announced to mark the new emperor's enthronement.

"We have to change the mentality of feeling guilty for taking days off," Ishii said.

The online survey was conducted in September and covered employed men and women aged 18 and older. There were 11,144 valid responses.

Japanese, Thais and Americans took the shortest annual vacations, with the typical employee taking 10 days a year. But those in Japan generally take only half their allotted days off, the lowest ratio of all respondents for the third straight year, and 20 percentage points lower than the next lowest, Australia, where people took 70% of their vacation time, on average. 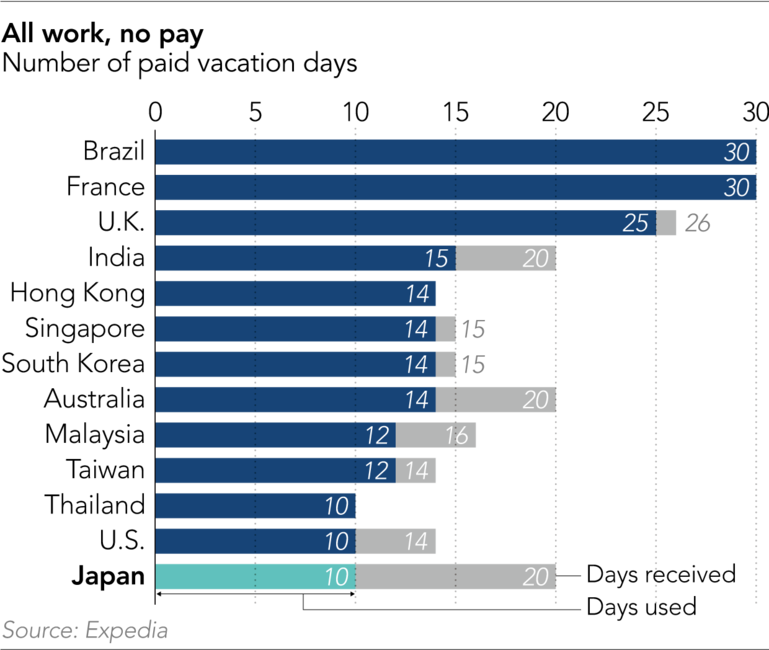 Leisure lovers Brazil, France, Spain and Germany had 30 paid holidays per year. In general, Asians put in more days at the office than Europeans.

Asked why they did not take more of the days off that they have coming, most Japanese respondents cited understaffing at their companies. "Many Japanese have a strong sense of responsibility to their jobs, and they are too concerned about the situation at work to take paid holidays," said an Expedia representative.

The second most frequent answer was, "To save holidays for an emergency," followed by, "I don't want my boss or colleagues to think I'm unmotivated."

The sense that taking time off is lazy is deeply ingrained in the Japanese workplace. Fifty-eight percent of Japanese workers said they feel guilty taking paid vacation, the highest among those surveyed. And while a majority of workers in all locations said they deserved more time off, the share in Japan who felt that way, at 54%, was lower than elsewhere.

Another difficulty for frazzled Japanese looking for a break is the frowns of bosses and colleagues. Asked whether their superiors are supportive when they ask for paid holidays, only 43% of Japanese workers said they were, the lowest among all those surveyed.

In Brazil, which is among the countries with the longest paid vacations, more than 80% of respondents said their bosses are cooperative when they ask for time off.

Younger workers everywhere appear to have a preference for leisure. More than 60% of respondents aged between 18 and 49 said they need more vacation, while only 40% of those aged 50 and older said the same.