For foreign brands interested in China as a source of growth, livestreaming offers the chance to tap into an audience of upwardly mobile young consumers with increasing discretionary income. (A screenshot of the ShopShops website)
ELISABETH ROSEN, Contributing writerJune 1, 2018 14:50 JST | China
CopyCopied

NEW YORK -- On Liyia Wu's phone screen, a young woman with cropped hair is trying a black off-the-shoulder dress. She turns around, describing the fit and feel of the dress in Mandarin Chinese, pointing out its embellishments and details.

It is the way one might show off a recent purchase to a close friend -- but this fitting is being broadcast on Alibaba Group Holding's Taobao shopping site, and thousands of people are watching. Those who like the dress can scroll up to purchase it; others type in comments that appear in the bottom corner of the screen. "How do I order this one?" one viewer asks. Another viewer notes, "It looks very pretty on the girl."

The viewers, followers of fashion tips from the woman modeling the dress, are scattered across China; she is standing in front of a mirror at the Kimora Lee Simmons boutique in New York's Flatiron neighborhood. But on ShopShops, an internet streaming service created by Wu, the geographic distance no longer matters.

As U.S. retailers face declining sales, ShopShops offers them a chance to tap into the thriving Chinese market. The company connects retail stores in the U.S. with Chinese consumers via livestreaming bloggers, an increasingly potent force in the world's most e-commerce-enabled country.

Most retail livestreams take place on the Taobao Live marketplace. Taobao and Tmall, an associated site, generate higher transaction volume than all of the U.S. online retail industry, according to Digital Commerce 360, a consultancy focused on online retailers.

Since the first ShopShops stream aired on Taobao in 2016, it has partnered with close to 200 brands and retailers, from online-first retailers such as Everlane and Away to independent boutiques like New York's Totokaelo and Amarcord. The company recently raised $6.1 million in seed funding from U.S. investors focused on retail, including Forerunner Ventures, Union Square Ventures, and GGV Capital.

Broadening reach and visibility is a priority. In May, ShopShops streams started airing on the channels of influential fashion commentators on WeChat, Tencent Holdings' ubiquitous Chinese messaging and social media app. From June the streams will be available via ShopShops' own app. While all the early streams were from U.S. stores, South Korean retailers started streaming on ShopShops' existing service on May 20. The team is also eying Japan. Liyia Wu, founder of ShopShops, says live streaming is the future of retail.

"It started as a shopping guide," Wu said. "A lot of people asked where I shop in different cities, so I wanted to show them. But we realized it was hard to do user acquisition and grow [as a livestreamer] without a way to monetize. So we started trying out livestreaming in stores."

Wu comes from a surprisingly offline background. At the University of British Columbia in Vancouver, she majored in finance and accounting. After graduation, she moved to New York to study fashion merchandising at Parsons School of Design, and went on to work in fashion merchandising for Twinkle by Wenlan, a women's clothing brand.

In 2008, she opened a boutique in Beijing showcasing U.S. designers, and launched her own brand the following year, before starting ShopShops in 2015 and shifting her focus back to the U.S.

"The target audience is Chinese people born around 1980 -- the baby boomer generation for China," she said. "A lot are single children, well-educated, with more disposable income. Before, they were chasing after big names like Chanel and Louis Vuitton. Now they already have that and they're looking for something that's unique and different."

ShopShops focuses on vintage stores and independent boutiques. For these small retailers, which like their larger counterparts are facing declining retail sales in the U.S., being able to tap into this new market is valuable. Each stream gets about 15,000 views and usually generates $8,000 in sales for the retailer. Hosting streams is free; instead of an upfront fee, stores pay a commission to ShopShops of about 20% on sales, and ShopShops deals with U.S.-based streaming channel hosts.

"It's a really fun, personal way to connect with viewers," said Megan Feeney, wholesale account executive at New York-based jeweler Lulu Frost, which aired its first stream in late April after being contacted by ShopShops. While she did not divulge sales numbers or views, Feeney said the event was a success and Lulu Frost was planning another broadcast later this year.

Hosting a stream is fairly time-consuming, taking two or three hours, but is cheap in terms of investment, requiring only an iPhone and a tripod. However, it is not a daily occurrence. Retailers typically opt to stream once every four to six weeks, according to Wu. ShopShops hosts about 80 streams a month, currently focused on New York and Los Angeles, although it will soon expand to other major cities in North America, including Toronto, Chicago and San Francisco.

One of ShopShops' backers is Hans Tung, a high-profile venture capitalist and managing partner at GGV Capital, who was an early investor in cross-border e-commerce. As an investor in Chinese social commerce apps Little Red Book and Wish, he watched sales soar from zero to millions of dollars in just a few years. "Taobao and Tmall both have cross-border business. What's different about ShopShops is that they're making shopping more fun, more entertaining," Tung said.

China is the largest market for livestreaming, with viewership hovering around 456 million, more than half of the country's 710 million internet users. Deloitte, a consultancy, estimates that livestreaming revenue will hit $4.4 billion this year, a 32% increase over 2017 and up 86% since 2016. 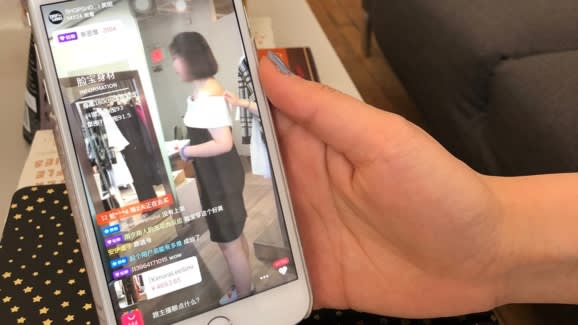 Entertainment is the original purpose of livestreaming apps, and the most popular hosts can earn millions of dollars. But in the last two years, retail has become another popular use. "Chinese consumers want experiences, particularly millennials," Tung said. "People are already used to livestreaming for entertainment, so using it for shopping makes sense."

For foreign brands interested in China as a source of growth, livestreaming offers the chance to tap into an audience of upwardly mobile young consumers with increasing discretionary income.

"More traditional routes to market for Western brands are less direct," said Coye Nokes, a partner at OC&C Strategy Consulting. "It is often difficult to present a brand with the right messaging and image if there are too many intermediaries. ShopShops gives some control back to the brand in how they position themselves in the market and how they target their consumers."

Live streaming is the future of retail, Wu said, not only in China but globally, as other countries dive deeper into mobile e-commerce. But listening to her describe ShopShops, it is clear that she sees the app as a modern update to old-fashioned retail.

"It's a very intimate and direct way to shop," she said. "It's just as though you walk into a store and talk to the salesgirl: 'Hey, I'm looking for a black dress. Can you help me find one?'"