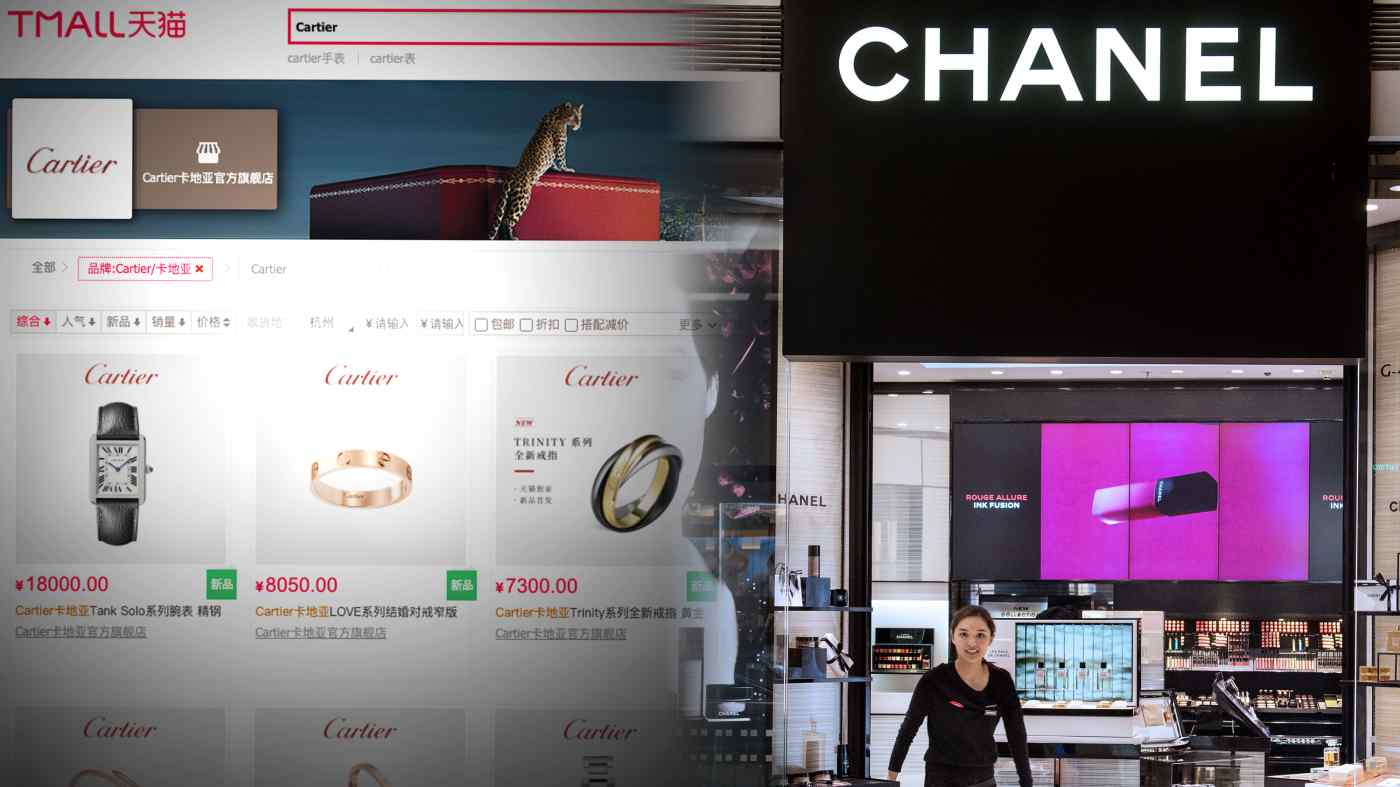 Global luxury brands are hoping that online sales in China can ease some of the pain from the coronavirus outbreak. (Source photos by Reuters)
NIKKI SUN, Nikkei staff writer,June 11, 2020 15:36 JST | China
CopyCopied

In the past few months alone dozens of brands -- including Cartier, Montblanc and Prada -- have set up online shops in China. It is a trend that would have been all but unthinkable even a few years ago, when the idea of selling fine leather goods and exquisite jewelry online was looked down on by those in the industry. But that was before the coronavirus.

While Chinese shoppers account for roughly one-third of global luxury sales, most of their shopping is usually done overseas. With international travel banned and Western markets yet to recover, generating sales within China has become a pressing issue for executives of luxury houses.

"China has become the hope for growth of many brands," Daniel Langer, CEO of U.S.-based luxury strategy firm Equite said. "In the last two months, we have been approached by brands at a pace never seen before." Langer said these brands are either seeking advice on enter the China market, or are looking to launch more marketing campaigns in China. "A lot of brands are feeling a sense of urgency," he said.

Bain & Co. expects the global market for personal luxury goods, which relies heavily on store sales in large cities, to contract 20% to 35% this year. Langer, who is also a professor of luxury strategy at Pepperdine University in California, expects half of all second-tier luxury brands to disappear in the next three years.

To survive the storm, China is key, he said. While Chinese contributed to some 90% of global luxury sales growth last year, 70% of them made the purchases overseas, as it costs more to buy the same items domestically due to tariffs. With the travel restrictions still in place, however, Chinese shoppers have little option but to buy locally.

"China is becoming even more important now, because it's probably the only market where consumption is fully opening," said Pablo Mauron, China managing director at Digital Luxury Group, an agency specializing in digital marketing for luxury brands. He said the company also received many more requests from clients since the Chinese New Year earlier this year.

E-commerce is crucial in boosting sales in China, Mauron said, as luxury customers there tend to be much younger and more tech-savvy than those in the West. He said many brands have already shifted their budget from hosting offline events to social media, online marketplaces and livestreaming platforms.

These kinds of digital efforts by luxury houses have been unthinkable in 2012, when the Swiss executive started his role in China.

"Eight years ago, it's not even a question of selling luxury online," Mauron said, as the touch-and-feel experience and instore services were considered more important factors in the high-end segment. "Covid-19 really has accelerated a lot of things," he said.

Indeed, in the past few months, Cartier, MontBlanc, Balenciaga, Prada, Miu Miu and Piaget have opened flagship online stores on Tmall, a business-to-customer marketplace owned by Alibaba Group. Its rival JD.com said about 20 luxury brands, including Chanel-owned jewelry brand Goossens, have joined its platform since January.

In an annual sales event on June 1, JD.com said sales of luxury products increased 400% in the first hour. To mimic the offline premium shopping experience, JD sent couriers wearing formal attire with white gloves to deliver the products in electric cars. Alibaba said close to180 luxury brands will be participating in its annual 618 shopping event on June 18, doubling the number who participated in a similar event seven months ago.

E-commerce has contributed to the strong rebound of luxury sales in China since April, along with pent-up demand and tourist repatriation spending. Executives of Louis Vuitton owner LVMH, Kering, the parent company of Gucci and Alexander McQueen, and Burberry all reported higher sales growth than last year in China. Burberry saw double-digit growth in its online channels. On the reopening day of Hermes' Guangzhou store in April, the single shop brought in $2.7 million in sales, WWD reported.

Such signs of sales recovery are encouraging brands to pour even more resources into China, especially digital channels. This is has led to a surge in tech-related hiring.

More than 20 job advertisements for people with digital expertise have been posted by LVMH, Hermes, Tiffany, Vacheron Constantin, Alexander McQueen, Christian Dior and Kering on LinkedIn within the past month. Among the roles being offered are WeChat specialists, e-commerce managers and digital executives.

The growing importance of the Chinese market during the pandemic could have even longer term impacts. Langer from Equite expects more iconic fashion events that would typically be staged in major Western cities will be hosted in China this year, helping the country become a bigger trendsetter in the fashion industry.

While Paris, Milan and London have either cancelled or postponed their summer fashion weeks, Shanghai went ahead with its event by moving everything -- including runway shows -- online.

Swiss luxury conglomerate Richemont debuted more than 100 new watch models from nine brands during a livestreaming show for watches on Tmall after Watches & Wonders in Geneva, the industry's largest exhibition, canceled its physical events in April due to the pandemic. Many of Richemont's new products were immediately made available for sale online.

Despite the seemingly bright outlook, betting heavily on China is not without risks for luxury brands.

One is that many consumers might postpone luxury purchases altogether, regardless of whether they are online or offline.

Angelise Wu, a 31-year-old Beijinger, who used to spend tens of thousands of dollars on luxury products during her overseas trips every year, has not made any purchases since January.

"The price difference is still very big for top brands," Wu said. She said leather bags that cost more than $4,000 in Europe would be at least 30% more expensive in China. Instead, she said she prefers to wait and buy more when she can travel again. "I don't need the bags now. I still have many unused ones," she said.

"The risk is indeed that consumers postpone their purchases," said Luca Solca, managing director of luxury goods at Sanford C. Bernstein Schweiz. "Converging prices to a narrower price gap between Europe and China could be a good idea."

At the same time, Langer said brands risk hurting their image if they rely on discounts and promotions to boost sales. "Their best customers might never come back." he said, as their existing collections would lose value.

The other question on the table is how long the strong sales growth can hold up, given the weaker economic conditions in China.

Kering's chief financial officer Jean-Marc Duplaix said the trend of catch-up spending, fueled by pent up demand, is likely to be short term, and that the company still needs to be very cautious about the situation, Bloomberg reported in late April.

China's economy dipped 6.8% in the first quarter, and economists predict flat growth for the full year, with consumption expected to remain under pressure.

"There will be a lot of volatilities of luxury spending in the next six to eight months," Langer said.