TOKYO -- Business schools in mainland China and South Korea are climbing the international ranks, as institutions rush to meet demand for degrees that will help graduates navigate uncertainty and harness Asia's prosperity.

One mainland Chinese school broke into the global top five in the latest Financial Times MBA ranking, while another cracked the Asian top 10. So although one fewer Chinese school made the global top 100 compared with last year, the country's premier institutions are becoming more competitive.

All told, 15 Asian business schools made the worldwide top 100, one fewer than in 2018. They are led by the Franco-Singaporean school Insead, which retained its top position in Asia but declined one spot globally, to third from second. Six are located in China, including Hong Kong, along with four each from India and Singapore and one from South Korea.

Seven of the world's top 10 schools are still in the U.S., with the Stanford Graduate School of Business holding onto No. 1. Harvard Business School jumped from fifth to second.

The FT's ranking, released on Jan. 28, evaluates business schools based on factors like job prospects, the salaries graduates earn and diversity.

China Europe International Business School, or Ceibs -- established by the Chinese government and the European Union in Shanghai -- was named the world's No. 5 business school, continuing its surge from eighth in 2018 and eleventh in 2017. 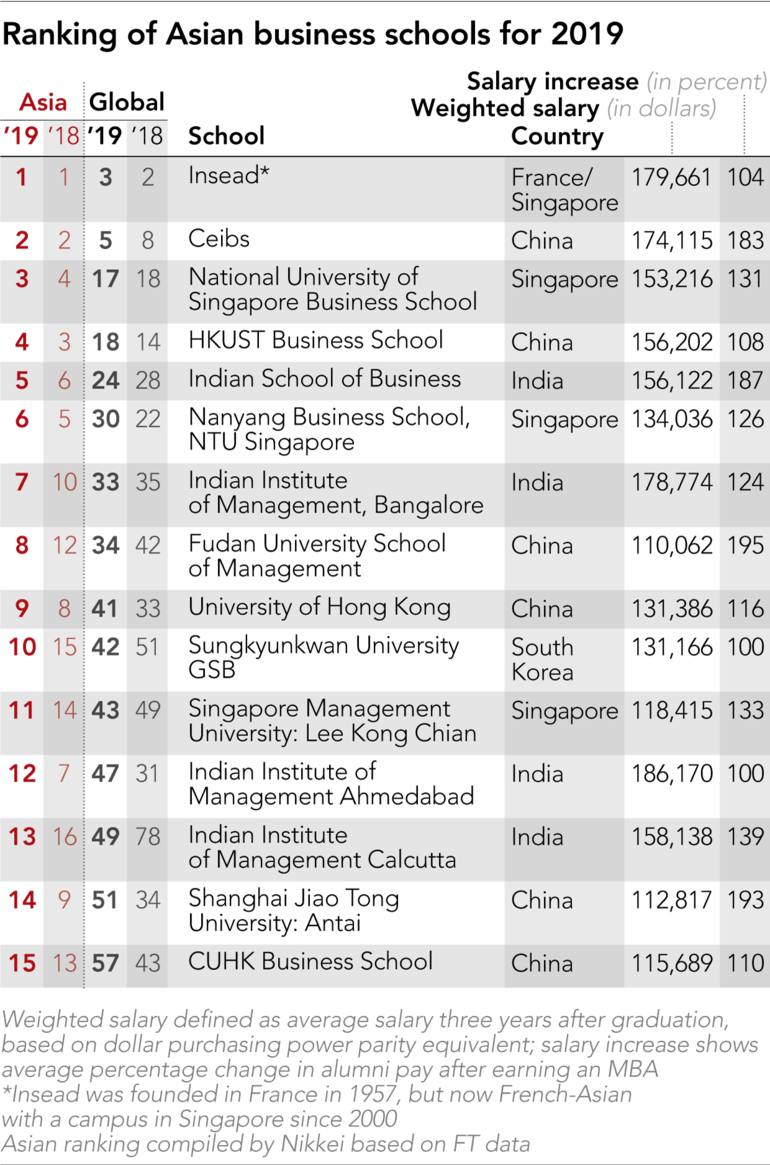 Ceibs prides itself on its international faculty -- 62% of the total -- and professors' deep understanding of China. On average, they have 11 years' experience working in the country.

The school also invites prominent executives and political leaders to give lectures and career coaching, such as former Sony Chairman and CEO Nobuyuki Idei. And it emphasizes in-the-field learning, with programs designed to help students grasp recent developments in Chinese business. Trips to Shenzhen and Nanjing, for instance, let students see how Chinese companies are globalizing their operations. Study abroad programs, to places such as Malaysia, afford opportunities to learn about corporate social responsibility.

Another Shanghai institution, Fudan University School of Management, jumped four rungs within Asia to eighth place, from 12th in the region last year.

Fudan established an international MBA program with the MIT Sloan School of Management in 1996. It offers over 300 courses, showing students the ropes of finance, innovation, investment management, e-commerce and big data.

In addition, "our school has strengthened the practical business consulting program in recent years," said Sun Long, executive director of Fudan's IMBA program. As part of this, students are offered the chance to gain real-world working experience. The university has partnerships with more than 160 companies, from Chinese conglomerate Fosun Group and telecom equipment maker Huawei Technologies to Intel, McDonald's and Michelin.

Fudan graduates see a 195% average salary increase three years after graduation -- the biggest of any school even in the global ranking.

The university's career progress rank -- which reflects changes in seniority level and size of employer before and after graduation -- stood at third globally, up from 10th in 2018. One thing that makes Fudan unique is its high percentage of full-time female students, which climbed to 65%, from 57% last year. Sun said the school makes a point of being women-friendly, with support for pregnancies and new mothers. When women cannot attend the regular three-day guidance program for first-year students, the school arranges alternative sessions. And in 2017, it started offering a special guidance program for women and their families, to help everyone understand the pressure the courses will entail.

Only one South Korean school -- Sungkyunkwan University Graduate School of Business -- made the global top 100, coming in 42nd place. But it made a splash at least in Asia, rising five spots to rejoin the regional top 10 for the first time in five years.

SKK GSB receives steady support from Samsung Group and accepts students from over fifty countries, according to a spokesperson. Over 60% of the faculty members are internationally based, and many consult for multinational corporations on the side. Most specialize in management, marketing or finance.

The South Korean school ranked first in the careers service ranking, which shows the effectiveness of an institution's career support system -- counseling, personal development, networking events, access to internships and recruitment -- as rated by alumni.

SKK GSB offers a practical clinic for resume building and interviews, and an alumni mentoring program. Students forge strong ties within and across the programs, leading to a powerful alumni network of business leaders working at global companies such as Samsung, Posco and Google.

Looking ahead, Asian business schools and experts see a shift in the MBA market -- one that is forcing them to be creative.

Despite steady growth in the number of applications, Juan A. Fernandez, associate dean and MBA director professor at Ceibs, told the Nikkei Asian Review, "Globally we have seen signs of shrinking in the number of persons interested in the traditional full-time MBA format."

Masahiro Fukuhara, an Insead alumnus and CEO of the Institution for a Global Society, a Tokyo-based IT company that develops education methods, said, "MBAs have become commodity goods, as low-cost online education can provide advanced training. In the U.S., schools other than the top ten have lost their edge."

Xu Bin, associate dean at Ceibs, stressed that the MBA is not dying, but that the core of the market is moving to Asia. "Our school's significance lies in its location itself, at the center of the world's most rapidly expanding market," Xu said. "Students can understand [China's] characteristics to succeed in doing business. Studying and living here will make them quasi-native."

Business schools, Xu said, cannot afford to rest on their laurels. "Schools need to keep pace with changes, in what they are offering."