HONG KONG -- Mainland China airlines are showing signs of a recovery as the global aviation sector remains under severe pressure with Thai Airways International announcing Tuesday that it will undergo a bankruptcy court-supervised restructuring.

The latest monthly operation data provided by China's airlines suggests that passengers are increasingly taking advantage of the opportunity to travel as authorities claim to have brought the coronavirus pandemic under control.

Shanghai-based Spring Airlines' passenger load factor -- which measures how efficiently passenger seats are filled -- was back to above 70% in April.

Still below the 82% passenger load factor reached in January, this came after Spring Airlines -- the country's top low-cost carrier -- achieved a 9.8% month-on-month increase in revenue-passenger-kilometers, or RPK, which shows the carrier is flying more people over longer distances.

Spring Airlines' April RPK was up 30% from March up for its domestic routes, but international routes dipped by 97% and services to Hong Kong, Macau and Taiwan -- which is under an independent category -- were also down by 85%.

The low-cost carrier was "less severely affected by COVID-19 than its peers," said Shen Xiaofeng, aviation analyst at Huatai Securities, in a recent research note. "We think internal flights could resume quickly as the pandemic subsides in China."

Rival privately-run carrier Juneyao Airlines' passenger load factor also breached the 70%-mark in April, with its bounce back mainly attributable to a 61% year-on-year cut on passenger capacity, but a pick up in domestic RPK also played a role.

The April figure was still 4% lower than March, but it was 55% higher than in February, when the load factor slipped below 50%.

On the other hand, the RPK for international flights kept on falling, as the April number was 73% less than March and 82% lower than February.

Shanghai-based China Eastern's passenger capacity and traffic volume in April rose by 9% and 22%, respectively, from March.

"The demand and willingness of passengers to travel have increased as compared with last month," Wang Jian, company secretary to the board, said in a statement last Friday. 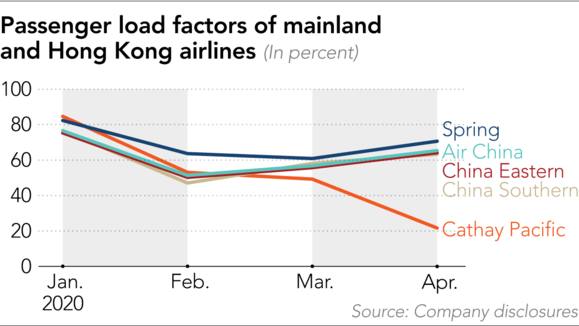 While mainland carriers reap the benefits of the sizable domestic market, Hong Kong-based Cathay Pacific Airways has been completely left behind, with the carrier's passenger load factor down to 21.7% in April from 84.7% in January.

Continued restrictions on arrival by air of non-residents without resident permits to the territory and the ban on transit traffic have left the airline in ruins, carrying less than 500 passengers a day in April, and leaving many of its aircraft sitting idle at its Hong Kong hub.

"As Hong Kong's home carriers, we do not have the benefit of a domestic passenger network as a buffer," said Ronald Lam, chief customer and commercial officer.

Even though the company has vowed to keep operating under a "bare skeleton passenger flight schedule" serving around a dozen destinations globally, passenger numbers are declining faster than Cathay can cut in capacity.

"At this stage, we still see no immediate signs of improvement," said Lam.

The Hong Kong carrier revealed that it has made an unaudited loss of 4.5 billion Hong Kong dollars ($580 million) for the four months to the end of April, for Cathay Pacific and Cathay Dragon.

This does not include its low-cost unit Hong Kong Express, which has been completely grounded since March 23 and is scheduled to be back in the air on June 19.

Lau has kept a hold rating for Cathay stock "given the low expectation on international travel demand."

But full recovery is yet to be seen in mainland airlines as well, as most of their year-on-year data still points southward.

The Chinese airline industry still has a long way to go.

"Performance has continued to improve, but remains well below prior year levels," according to Sunny Huang, an analyst at Fitch Ratings.

"In contrast to the sharp rebound in road traffic, air passenger traffic looks set to endure a much tougher journey," Huang said in a report on Tuesday.