TOKYO/SHANGHAI -- The recent case in which Ryohin Keikaku, the Tokyo-based company that runs the Muji chain of household goods stores, lost a trademark battle in a Chinese court has cast doubt over whether foreign companies will be allowed to compete fairly with local rivals and be treated equally in the country.

"The lesson that I have learned from this case is: secure your own rights first when you are considering expanding your business overseas," said Satoru Matsuzaki, president of Ryohin Keikaku, on Friday at a press conference. "It is also important to assert your rights and make people understand them."

Muji is short for  "Mujirushi Ryohin," the Japanese term for "no brand, quality goods." Its products are characterized by their simplicity. The trademark "Mujirushi Ryohin" appears as four Chinese characters pronounced as "Wuyinliangpin" in Mandarin.

However, Muji was not able to register its brand in Chinese letters in the country for some of its woven fabric products, including bed covers and towels, as a Chinese company had registered "Wuyinliangpin" in 2001 before the Japanese group entered the country in 2005.

"We could not register it in China as it was already registered," sighed Matsuzaki. The Chinese company has used "Wuyinliangpin" and adopted a simple and plain design for its products and stores which is quite similar to that of Muji.

The two parties took the issue to a local court in 2015, with Muji losing out. The company lost appeals in 2017 and last December. In the second appeal, Muji was ordered to pay $89,000 to the Chinese company. Matsuzaki insisted his company would continue its battle against its rival through other trials and administrative procedures and "will strive to restore its rights."

In response to the latest setback, Muji is currently selling its woven fabric products with its Chinese brand names hidden by stickers.

Matsuzaki argued that the loss "will have a limited impact" on its financial performance. "China is our biggest market overseas," he stressed. "We will continue to expand our business in China," he added.

Nevertheless, there will certainly be damage to the company's brand value. 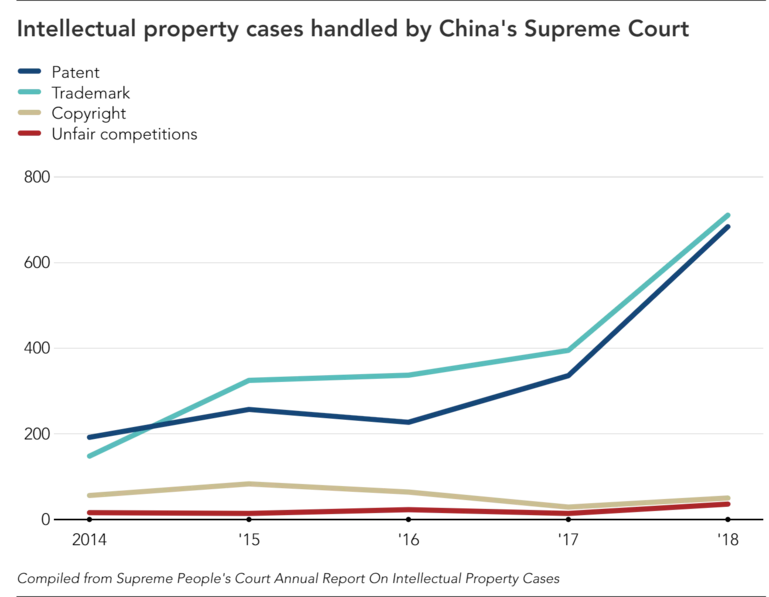 Muji's case has highlighted the importance of brand management in China, said Hidetomi Tanaka, executive director at consultancy Interbrand Japan. "Muji's case teaches foreign companies that they should place securing rights in China at the center of their branding strategy," stressed Tanaka.

For many foreign companies, China is one of the most attractive markets in which to conduct business. But Muji's case highlights the dilemma that foreign entrants face in the country.

The number of intellectual property cases handled by the Chinese Supreme Court has been increasing. In 2018, there were 711 trademark cases, an 80% jump from the previous year.

With regards to trademarks, China recognizes the "first to register" over "first to use," according to Mark Natkin, founder of Marbridge Consulting in Beijing. This custom appears to have taken root in China around the time the country undertook economic reforms and began to open up in 1979.

Apple, a latecomer to China's tablet computer market, had to pay $60 million in 2012 to settle a lawsuit filed by Shenzhen-based Proview Technology, which claimed the intellectual property rights for the 'iPad' name. The now-defunct computer screen manufacturer reportedly sued Apple for $1.6 billion for the 'iPad' copyright, which it registered in 2001.

Proview folded after being sued for insolvency by a local insurance company later in 2012. It also delisted from the Hong Kong stock exchange and reportedly used the money from the Apple lawsuit to pay off debts.

Shanghai Xingbake argued that it had registered the brand name in 2000 before Starbucks registered its own Chinese trademark. But Starbucks alleged that its name and trademark had been valid in China since 1996.

"Chinese courts will actually side in favor of the brand because they know that the person is just camping on the trademark," said Ben Cavender, managing director of China Market Research Group in Shanghai. "For many years, what we have seen is individuals or companies have filed a trademark and sat on it, so that when the real brand owner enters the China market, they can then sue the owner and demand money."

Analysts say that copycat disputes can be a bar for foreign businesses who wish to enter the Chinese market.

Meiken Go, president of TNC Research and Consulting, said that there had been cases in which Japanese companies gave up on the Chinese market because of trademark issues, as names for Japanese brands, celebrities and places are often registered by local individuals or companies.

An official in the Intellectual Property Division of the Japan External Trade Organization suggested that Japanese companies would usually choose to sue a local company when they know they can win.

Otherwise, when Japanese companies find that their brand trademarks are already being registered in China, they might need to negotiate with the registering company and buy back their brands. The price can be excessive, with the result that the companies have to either withdraw, or use a new brand name, Go said.

Some foreign companies, like Starbucks, have won their cases. But most of the winners managed to register their name or trademark before the copycats.

In December, a Beijing court ruled in favor of Cadbury U.K., which sued a local company for trademark infringement of its Eclair brand. The design of its product packaging also bore a similarity to that of Cadbury's Eclair, including the purple color used.

Xiamen Yikoulian was ordered to pay 2.43 million yuan ($351,000) in compensation to the British confectionary maker, issue a public statement and remove pastry products branded as 'yikoulian', the Chinese translation of 'eclair'.

After starting operations in China in 1993, Bridgestone registered its brand name there in 1997. Water Margin started to use the "Fulisitong" brand mark in the 2000s, which Bridgestone claimed resembled its registered trademarks. The Chinese company was ordered to pay $475,000 to Bridgestone in compensation.

Winning or losing depends on the case. But under China's "first-to-register" custom, adjudication is unlikely to produce positive results for companies that failed to register their brand name first.

Tanaka at Interbrand Japan said that China prioritized the company that registered its brand first, even if they are copycats.

Market observers advise companies to be proactive and register their trademarks in China as early as possible to avoid disputes. "It's actually not very hard to file here and it's fairly quick to get approvals once you have filed," said Cavender at China Market Research Group.

"If copyright issues continue to annoy foreign companies," said Tanaka at Interbrand Japan, "it is possible that they will avoid conducting business in China."