TOKYO -- Multinationals in Japan desperate for young talent are increasingly turning to non-Japanese students to fill the gaps in their payrolls.

Years of low birth rates coupled with a stringent immigration policy and steady if slight economic growth have left Japan with a tight labor market that even well-known domestic companies are struggling to overcome.

"We want students to know about us, and then hopefully, we wish to find those who are interested in joining our team," Vivienne Li Wenli, president of Hisense Japan, told the Nikkei Asian Review, at a recent job fair for international students. The event was co-hosted by the University of Tokyo and Japan External Trade Organization, or Jetro.

The Chinese home appliance maker has been gradually making a name for itself abroad. Acquiring Toshiba's television business last February added the premium Regza brand to Hisense's arsenal, but such moves are not enough for Li. She said will need to increase the size of her team by around fourfold, to around 300 employees, in five years. "However, what Japan lacks now is talent, especially young talent," she said, explaining her decision to try reaching out to students from different backgrounds. 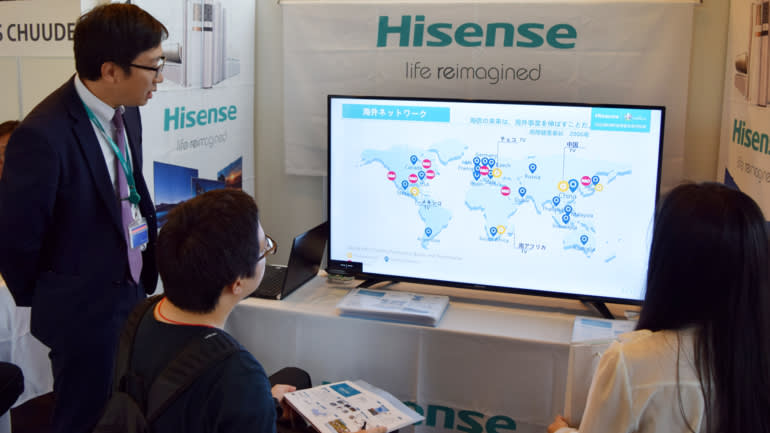 Hisense Japan is actively seeking to expand its employee base in the country, after acquiring Toshiba's TV business last spring. (Photo by Kenji Kawase)

Vietnam's FPT has an even more ambitious goal. Nguyen Minh Diep, a recruiter at FPT Japan Holdings, told Nikkei that the Japanese unit the Vietnamese conglomerate is trying to expand its team to 2,000 people by the year end from less than 1,400 as of last December.

The company's software and IT outsourcing operations have recorded rapid growth in orders, mainly in manufacturing and logistics sectors in Japan.

"We are using this opportunity to make an appeal to students on who we are," said Diep, who was at the same job fair. "If they're interested, I would like them to join us."

Diep and Li do not have a large pool to choose from. A record 85.1% of Japanese undergraduates who expect to join the workforce next spring had already secured jobs as of July 1, according to a survey by Research Institute for Graduate Recruitment, a unit of human resource conglomerate Recruit Group.

Japan's unemployment rate stood at 2.4% in May, far below 5.2% average among 35 OECD countries and higher only than the Czech Republic's 2.2%.

This tight labor market comes amid 10 straight years of population decline, especially among younger generations. The latest resident census, released on July 10, showed that the working-age population (ages 15-64) stood at 74.23 million as of Jan. 1, accounting for 59.5% of the total population and marking a decrease of 613,028 from a year earlier.

The number of working-age foreigners, on the other hand, has grown by 580,000 over the last five years to reach 2.26 million, partially offsetting the 4.13 million drop in working-age Japanese over the same period.

Exacerbating the labor situation, the Japanese economy has experienced its longest postwar economic expansion, though one so slow that many have not felt it.

Zhang Yao, a Tokyo University doctorate student from China's northeastern province of Liaoning, is one of the young foreigners seeking employment in Japan. "I originally thought of going home after getting a degree, but after experiencing a comfortable life here, I changed my mind," she said. The student of nuclear power is now trying to land a job next spring at a "well-known" multinational where she can build up her expertise in her chosen field.

The Japanese government is unprecedentedly eager to embrace students like Zhang, revamping its immigration policy to further smooth the way for skilled and educated younger people to stay in the country, even for good.

Prior to a change in laws and regulations in April, tough immigration requirements were frequently blamed for causing many foreign nationals -- even graduates of local universities -- to give up their hopes of finding employment in Japan. Shoko Sasaki, commissioner of the newly reorganized Immigration Services Agency, told reporters on July 17, that this is no longer the case. "Under the old framework, there were difficulties," she acknowledged. But the government's top immigration policy enforcer stressed that "virtually all university graduates are now able to switch [from a student to work] visa, and there shouldn't be any major issue anymore."

Attracting more international students to local campuses has been a longstanding policy for Tokyo, tracing back to then-Prime Minister Yasuhiro Nakasone's 1984 blueprint aimed at attracting 100,000 such young students.

The concept was inherited by his later successor Yasuo Fukuda, who vowed in a January 2008 policy speech to bring that figure up to 300,000 by 2020 as part of the country's globalization strategy.

Japan had 337,000 international students, including primary and secondary school students, as of last December. But while the numerical target has been met, attaining the underlying aim of the policy may still be far off. According to government data, only 30% of international students find jobs in the country after graduation, a number Tokyo wants to raise at least 50%.

Given the fierce competition for graduates, some companies are choosing to bide their time. "We are not seeking to hire right now," said Kazuyuki Ichikawa, personnel manager at a Japanese subsidiary of Hiwin Technologies, a Taiwanese machine tool parts supplier. "We are just trying to gradually get our name to stick in students' minds in the hope that they remember us when they decide to change jobs."

Even U.S. pharmaceutical manufacturer MSD, known in North America as Merck, is taking such an approach. Jun Otani, associate director of human resources, told Nikkei that the priority is to imprint their name in young people's memory through various promotional activities. "Even though we may not be able to hire talented people now, we always have to act in order to attract them at some points of their career."

For some students, it is the language that gets in the way. Farhan Mudasar, a Pakistani national who acquired a doctorate degree from Tokyo University in advanced material science this spring, has been hunting for a full-time job in Japan but so far in vain. "Most companies will not hire me, because they need Japanese proficiency," said Mudasar, who was on a Japanese government scholarship for higher education where the lingua franca was English.

Many multinationals prioritize Japanese language skills, as operation and hiring in Japan tend to be independent from those in their head offices.

Manny Yamanaka, manager at Caterpillar's Japanese unit, told Nikkei, "We hire separately by countries. We inform those who wish to work elsewhere to apply in the country that they wish to work for."

Otani at MSD echoes that point. "It will be difficult if you don't have command in Japanese."

Language is also an issue for Hisense's Li, who says priority is given to Chinese students who speak Mandarin. For candidates from other backgrounds, she said, "we wish their Japanese to be very good."

Mariko Harada, a lecturer at Tokyo University who organized the job fair, told Nikkei that it is "crucial" to help international students find ways to transition from school to work life if they are to remain in Japan. She believes they can be incentivized to join Japanese society but acknowledged that the language mismatch between students and potential employers is a hurdle. "That is not something we can do anything about. That is something for the companies to decide."

Creating a proper career path for international students is an integral part of the government's growth strategy.

According to Jun Osawa, deputy director of the Invest Japan department at Jetro, creating a virtual cycle in which international students help foreign multinationals to grow "will be conducive to more investment in Japan."

Osawa also acknowledged the language mismatch, and said he would like to see companies enhance their own language training programs to prevent young talent from slipping away.