YANGON -- Digital money transfer services in Myanmar by mobile phone operators and banks have all but replaced traditional remittances in only a few years.

CEO Brad Jones of Digital Money Myanmar -- operator of the country's leading remittance provider Wave Money -- says transactions via the service exceeded 2 trillion kyat ($1.3 billion) for the first time in 2018, adding that it will be "probably around $4 billion to $5 billion" by the end of 2019.

In less than three years, Wave Money has been the go-to service for workers in Yangon and other urban areas who regularly send money to families in the countryside.

People in advanced economies awash with mobile banking services have little in common with people in Myanmar, where only three in 10 people in a country of 53 million have bank accounts.

Wave Money has neatly sidestepped this challenge, creating a nationwide network of 45,000 agents who quickly and safely handle remittances. This far outnumbers bank branches and ATMs, making it a kind of de facto financial institution for the majority of the population.

Typically, money is sent from urban to rural areas of the country, whose gross domestic product hovers around $1,300.

Financial disclosures by Yoma Strategic Holdings, the Singapore-listed joint venture partner, show that in 2018 money transfers in Myanmar rose 15.3% monthly and 4.6 times year on year. Based on this, the Nikkei Asian Review estimates that remittances via Wave Money totaled 430 billion kyat in March 2019. 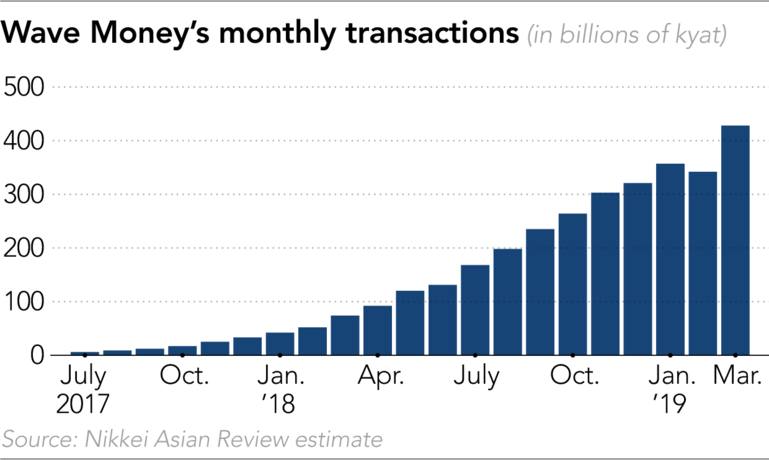 Remittances are handled by Wave Money agents, identified by the company's distinct signage. Many run grocery stores or other small shops. People sending money inform the agent of the name and telephone number of the recipient then hand over the cash. The agent completes the transaction on a mobile device, after which the sender and recipient receive confirmation via a text message, which includes a transaction number used to claim the cash.

Surveys by Wave Money indicate that the percentage of people abandoning traditional ways to remit money -- be it personally, through friends or via bus companies -- has fallen by two-thirds in the three years until March 2019. In contrast, the percentage who use mobile financial services has exploded to 80% from just 0.8% during the same period.

Until about three years ago, bus companies were the primary conduit for factory workers in cities who wanted to send money to families or small business owners settling payments.

This entailed bringing cash to a bus company where it was put into a tightly sealed envelope bearing the name and contact address of the recipient. The bus company would take a commission of around 5%. The recipient would then wait for the bus to arrive to receive the money.

Remittance by bus is still available, but few people now use it.

Phyo Phyo, a baggage handler working in central Yangon for long-distance buses, knows firsthand the change. She used to accept 50 to 100 remittance requests a day to stops along bus routes all over the country. But things have changed. "There are no customers sending cash to other cities by bus anymore, because everybody uses Wave Money," she said.

CEO Jones agrees. "It has become a very mature product in a very short period in Myanmar," he told people at '4th Emerging Asia Banking & FinTech Summit' held in Yangon in June.

Other banks and mobile phone operators in Myanmar are rolling out their own digital remittance services, but Wave Money's dominance seems fairly secure, at least for now. "It's not an easy business, especially managing the agents," Jones said.