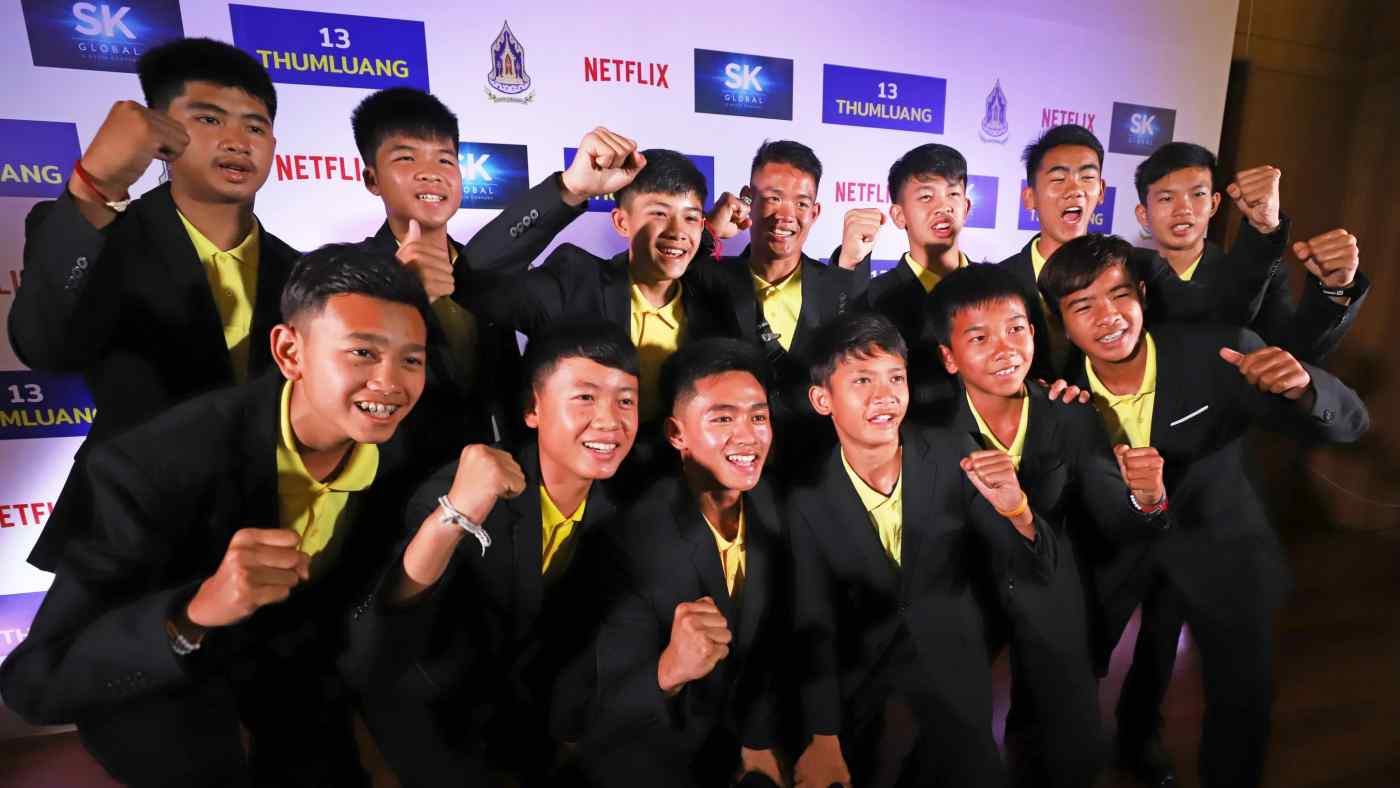 Netflix, the top video streaming company in Southeast Asia, has secured exclusive rights to make a miniseries based on the rescue of a Thai soccer team from a flooded cave.
MARIMI KISHIMOTO and JUN SUZUKI, Nikkei staff writersJune 20, 2019 05:32 JST | Thailand
CopyCopied

BANGKOK/JAKARTA -- Video streaming is king in smartphone-savvy Southeast Asia, and global heavyweights like Tencent Holdings and Netflix are battling along with regional tech companies over a burgeoning market set to expand into the tens of billions of dollars per year.

Tencent on Friday launched the WeTV platform in Thailand, its first overseas streaming market. The Chinese technology giant aims to break into Thailand's top three services by the end of 2019 with such offerings as Chinese movies and dramas, which have gained a following in Thailand.

Netflix has established itself at the top of the Southeast Asian market with a 31% share, thanks partly to locally made content with broad appeal. The American company plans to add another 100 original programs across eight Southeast Asian countries this year, including Thailand, the Philippines and Malaysia.

In April, Netflix secured exclusive rights to make a miniseries based on last year's rescue of a Thai youth soccer team from a flooded cave, a drama followed around the world. "We are looking forward to bringing this inspiring local, but globally resonant, story" to life, said Erika North, director of international original programming.

Amazon.com rolled out stand-alone Prime Video across Southeast Asia and many other markets in 2016 and began offering it for free to Amazon Prime subscribers in Singapore a year later.

A graduate student in Bangkok uses three streaming services -- including Netflix and Hong Kong-based Viu -- to watch dramas from Europe, the U.S. and South Korea. "I end up watching for as much as four or five hours a day," said the 30-year-old. "I hardly ever watch television because the picture quality is so bad."

Economic growth and changing lifestyle habits are powering a rapid expansion of streaming in the region. A report by Google and Singaporean sovereign wealth fund Temasek Holdings estimates that Southeast Asia's online media market, including gaming and advertising, topped $11 billion in 2018 and will triple to $33 billion in 2025.

Regional players also seek a slice of this pie. Malaysia-based Iflix, dubbed the Netflix of Asia, holds a 22% share of the Southeast Asian market, putting it behind only Netflix. Low prices and local content for each of its markets have helped Iflix gain more than 10 million subscribers.

The growing ranks of companies in the streaming arena are vying for the eyeballs of some of the world's most avid internet users.

Average daily internet usage clocks in at 10 hours in the Philippines and nine hours in Thailand, according to a report by U.K.-based We Are Social. Thais spend more than three and a half hours a day on average watching TV and streaming video, with Indonesia not far behind at three hours, compared with four and a quarter hours in the U.S.

And there remains plenty of room to grow. Data from Statista on subscription-based streaming services shows that the U.S. is by far the largest market by revenue at 46%, followed by China at 7% and Japan at 6%. The 10 members of the Association of Southeast Asian Nations together account for just over 2%.

Yet 6% of all users live in the region, more than in Japan, Germany or the U.K. With disposable incomes rising as the middle class expands, users of free or ad-supported services could be convinced to open their wallets if platforms can offer sufficiently attractive content.