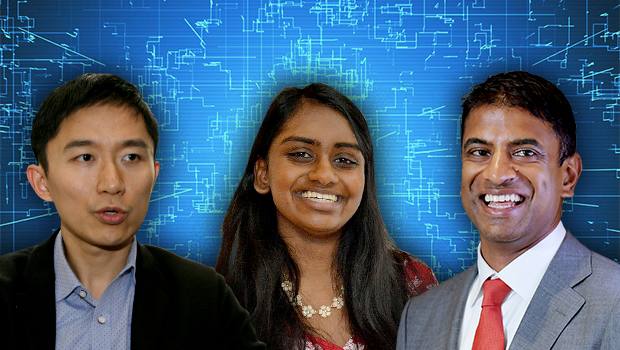 HONG KONG/TOKYO -- For fans of movies like "The Matrix," the development of artificial intelligence will entail machines taking over and us all slaving away under robot masters. But dodging bullets in a dystopian future could not be further from the minds of many bright young individuals.

Xu Wei, the 38-year-old chief operating officer of ZhongAn Online P&C Insurance, is part of a new generation of business managers intent on exploiting the technology for the benefit of others.

Insurance has always depended on human knowledge and experience, but "AI technology is going to change landscape," he said.

After spending eight years heading up advertising services and other businesses at Google, Xu is relatively new to the industry. But having firsthand experience of using AI to create value meant he could immediately see the potential contained in ZhongAn's contracts. "We have distributed 8 billon policies in the past four years and built our own data platform from scratch."

His vision for the future has every detail of people's lives reflected in their insurance payments, even down to their blood sugar levels and the number of steps they take in a day.

"Maybe users still want to talk to a real person. But as long as you can solve the problem in an efficient way, the new generation will be used to this kind of communication," he said.

Xu is not alone. Swiss pharmaceuticals giant Novartis will have a new CEO next month. Vasant Narasimhan, a 41-year-old who has been leading the company's development division, said that one of his missions is to use AI to change how the world's second largest drug company is run -- using it to identify new patients, for example.

After graduating from Harvard Medical School, Narasimhan worked with AIDS and tuberculosis patients in developing countries, an experience that convinced him he could make a difference by developing innovative drugs and, with that conviction, joined Novartis in 2005.

Drug development is a time-consuming and costly business. A new drug for an intractable disease can take over 10 years to develop and cost more than $1 billion.

Novartis conducts about 500 clinical trials annually, but 70% of the data they obtain has yet to be analyzed. The company employs 200 data scientists and is working to develop a system that can select the most appropriate patients for each trial and forecast its cost and quality.

Kavya Kopparapu, a 16-year-old from the U.S. state of Virginia, was inspired by a desire to help her grandfather in India, who was suffering from diabetic retinopathy, an eye disease that can lead to blindness.

With her younger brother and a classmate, she developed a smartphone app that works with a special lens she 3D-printed. She then set about building a diagnosis system that compares photos of eyes captured through the app with 34,000 retinal scans from a database. Through machine learning, the system recognizes signs of the disease. Once testing is completed, Kopparapu can take her product to market.

In May 2017, she gave a TED talk, at which she extolled the power of AI when it comes to problem solving. She now flies around the world as CEO of an organization that promotes science and math education for young girls.

American inventor Ray Kurzweil predicts that "singularity," a point at which AI surpasses human ability, will arrive in 2045. However, he warned, "Technology has always been a double-edged sword. Fire kept us warm, cooked our food, and burned down our houses." AI could revolutionize industries, jobs and value, but so much depends on how it is used, he argued.

It is difficult to forecast what the world will be like after singularity and how, or indeed if, humans and machines will coexist.

Perhaps unsurprisingly, some teenage AI pioneers have a different take.

"The time will eventually come when AI will produce things that are more interesting than what people make," said Tokyo junior high school student Kaede Sugano.

After winning a programming competition for young adults at the age of 10, it became clear she would go on to do great things. Now 14, she is trying to create software that can produce entertainment content. Her current project involves analyzing screenplays through natural language processing and studying plot patterns from the characters' feelings.

"Enjoying" content, she insists "will always be for humans."