TOKYO -- Conversations on next generation technologies were largely hypothetical only a few months ago, but the potential of 5G networks, quantum computing and location services are being tested in real-time as a way to contend with the coronavirus pandemic and to adjust to the 'new normal' that it has forced upon us.

"It's easy to take all this technology for granted but these types of new services, the digitalization of society, is felt by everyone in the world," said Takahito Tokita, CEO of Fujitsu. He was among a handful of leaders in the digital economy who delivered lectures on the second day of the 22nd Global Digital Summit, hosted by Nikkei.

Tokita, who delivered his lecture in person, touted Fujitsu's artificial intelligence products deployed by Japanese local governments to deal with the coronavirus.

"Our technologies such as the AI chatbot Chordship have been utilized by Minato Ward (in Tokyo) to answer inquiries from residents, and in Miyagi and Nagasaki prefectures to track down infected people and their contacts," Tokita said.

He also said quantum computing could be used to accelerate the creation of vaccines and treatments for COVID-19 and future diseases. Artificial intelligence will be valuable in reconfiguring supply chains, jobs and services to the new normal after this virus.

Similarly, Edzard Overbeek, the CEO of HERE Technologies, described the contributions to combating the spread of COVID-19 made by his Dutch mapping and location services company.

"Location is at the core of solving this crisis," said Overbeek in a pre-recorded lecture. "We are using location technologies to understand patterns of where people are walking and predict how many people were walking around them." 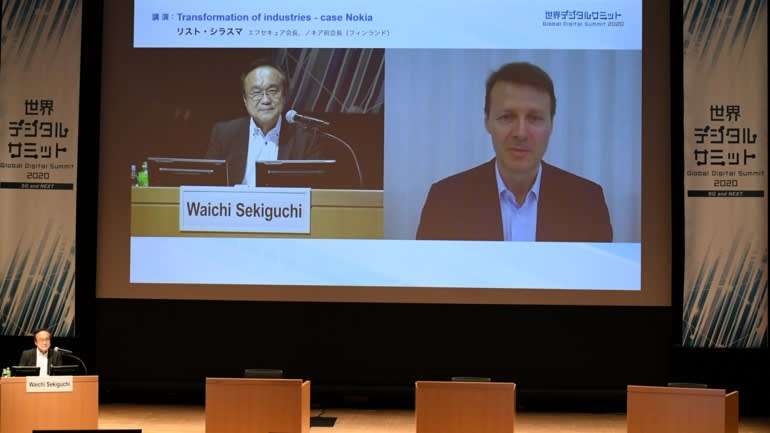 In perhaps its most important test, HERE deployed its technology to determine and redistribute patient load balance in hospitals in Italy, the country that was worst affected by the virus in Europe. Overbeek said the feature would be launched in Brazil, the current infection hotspot. Tracking down ventilators, which have been in short supply around the world, will be another urgent application for location services.

But businesses of every size are still mired in uncertainty, a situation that can be alleviated by constant scenario planning, according to Risto Siilasmaa, former chair of Nokia's board.

Siilasmaa predicted increased competition between countries using 5G networks because of the technology's potential to enable new business models. "China, the U.S. and South Korea understand the power of the new platform and the need to spread this as quickly as possible," he said. Japan and Europe are lagging behind, he noted, warning against legislative hurdles to technological advancement.