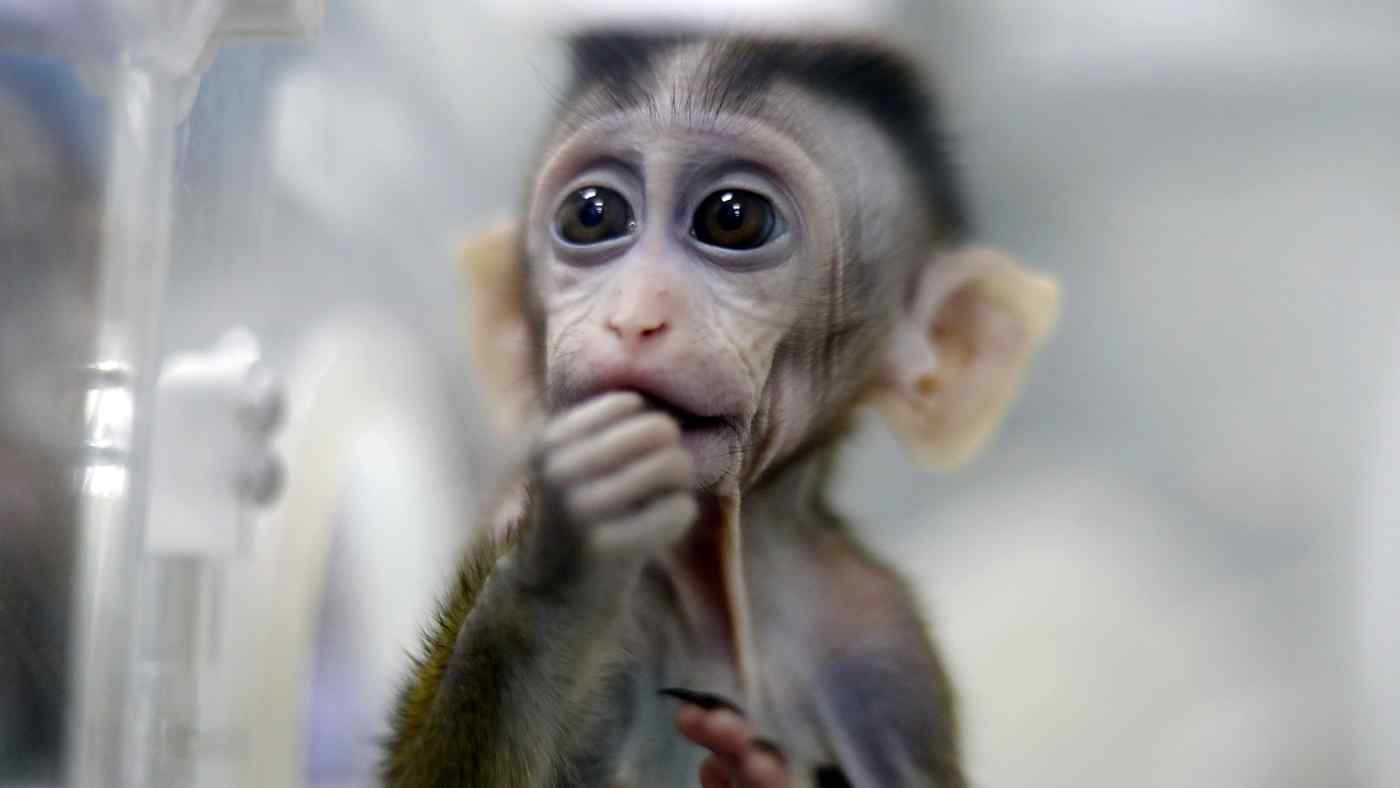 A monkey cloned from a gene-edited macaque with circadian rhythm disorders is seen in a lab at the Institute of Neuroscience of Chinese Academy of Sciences in Shanghai.   © Reuters
BUMPEI MATSUKAWA, Nikkei staff writerFebruary 8, 2020 07:20 JST | Japan
CopyCopied

TOKYO -- Trans Genic, a gene analysis company that carries out preclinical trials for pharmaceutical companies, has downgraded its fiscal 2019 earnings due to the coronavirust epidemic in China.

The company has been unable to import lab monkeys from China it uses for contract trials due to customs restrictions following the outbreak.

"It will be impossible to conduct experiments as planned this fiscal year," said a Trans Genic representative. The company downgraded its full-year operating profit guidance by 150 million yen.

Tans Genic is one of many Japanese companies that expect to see fiscal 2019 earnings fall short of earlier estimates due the ripple effects from the coronavirus. The impact will be pronounced in the hotel and airlines industries.

While market watchers are already cutting their earnings forecasts for a wide range of businesses, they could further lower their projections once the extent of production shutdowns and store closures become apparent.

"In the worst-case scenario, we may see a decrease of billions of yen in revenue each month," said IHI Executive Vice President Takeshi Yamada. Although IHI has yet to issue a clear downgrade of earnings, "the impact may emerge starting with March sales," Yamada said.

Japan Airlines and ANA Holdings unit All Nippon Airways have decided to cut flights to China by roughly half. Each carrier's exposure to Chinese routes exceeds 10%.

"The operating profit will drop by 3 billion yen to 5 billion yen on a quarterly basis," said Masaharu Hirokane, an analyst at Nomura Securities.

Given JAL's 140 billion yen operating profit forecast for the full year through March, the financial hit is still limited. But "if travel curbs spread to destinations other than [mainland] China, the effect will grow larger," Hirokane said.

Companies serving inbound demand are also feeling the squeeze. Hotel operator Seibu Holdings forecasts that the downturn of customer traffic from China will shave roughly 1 billion yen off its revenues.

On top of the cancellations for January, Seibu predicts reservations made by Chinese tour groups will be cancelled for all dates through the end of March.

For hotels in the Seibu group, nearly 40% of revenue from lodging fees come from foreign clients. Chinese account for 26% of that slice.

"At this point, there are no conspicuous cancellations other than those by Chinese customers," a Seibu representative said.

There is still the potential for the impact to mount. Seibu's operating income for this financial year is expected to underperform by 3.5 billion yen, the figures including the effects from typhoon damage last fall.

Yamaha expects consolidated sales to shrink by 2 billion yen this fiscal year due to poor sales of musical instruments and sound equipment in China. About 30% of all products are manufactured at four Chinese plants.

Plants were scheduled to resume operation on Sunday, but the date has been pushed back by a week to ensure the health of employees.

The effect of the delay is expected to spill over to deliveries. "Production of musical instruments cannot be easily shifted," said Yamaha Director Satoshi Yamahata.

Other corporations, like appliance seller K's Holdings, have resigned themselves to an eventual drop in earnings.

Janome Sewing Machine is also bracing for an impact. The disease "will deliver a significant blow to capital expenditure trends in China," a Janome representative said.

Market analysts have tilted heavily toward downgrades since January. Among 410 listed companies scored by at least three QUICK Consensus analysts, 266 have seen their outlooks revised from the end of December. Analysts downgraded 160 of those companies, or 60%, while upgrading only 106 companies.

The outlooks are poised to deteriorate still. "We don't know how long factories will cease operations or how long stores will remain closed, so [analyst projections] have not fully accounted for the impact of the novel coronavirus," said Masashi Akutsu, chief equity strategist at SMBC Nikko Securities.

Additional reporting by Tokio Murakami and Kentaro Takeda in Tokyo