TOKYO -- Of the many major Japanese companies that held annual shareholders meetings in June, one of the most impressive may have been the one by Suzuki Motor.

The June 28 meeting was chaired by President Toshihiro Suzuki, but much of the attention was focused on 88-year-old Chairman Osamu Suzuki, who presented an ambitious plan to sell 5 million cars in India in 2030.

Noting it had been 36 years since the company entered India in 1982, he pointed out that the market had grown rapidly over the last decade, with the new car market surging 9% annually.

Suzuki’s Indian unit, Maruti Suzuki India, sold 1.65 million cars in the country in the fiscal year through March, controlling more than half of the passenger car market. As well, 120,000 cars were shipped abroad from India.

India ranked as Suzuki's biggest market by sales for the third straight year, followed by Japan. Suzuki's state-of-the-art production system in the country supplies more than 90% of the parts.

Chairman Suzuki said that if India’s new car market continues to grow by 9% a year, annual new car sales in the country are expected to hit 10 million by 2030, from about 3.2 million currently. 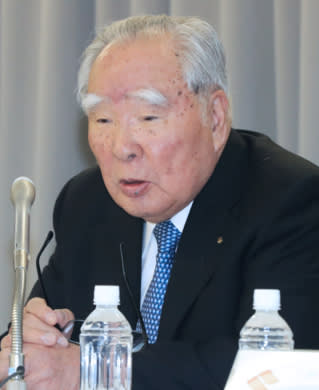 "We want to continue to control 50% of the market and achieve annual sales of nearly 5 million in the country," he said.

He added that the company needs to reach its goals by "thinking backward" from the future. "You can count on our enthusiasm,” he said.

The company also wants to comply with the Indian government's goal of raising the electric vehicle ratio to 30% by 2030. Suzuki plans to make 30%, or 1.5 million of its vehicles, electric. The chairman said he was "firing up executives every day" to reach the goal, adding that the company had taken on an "unprecedented challenge."

Shareholders listened attentively and applauded after the chairman finished speaking.

The company's all-out concentration on India has risks. While many Japanese companies set their sights on achieving three- or five-year plans, Suzuki is looking further out by imagining the world in 2030.

To achieve its goal, Suzuki needs a nationwide sales network, a wide range of models to satisfy niche market segments, and an army of mechanics to provide after-sales service.