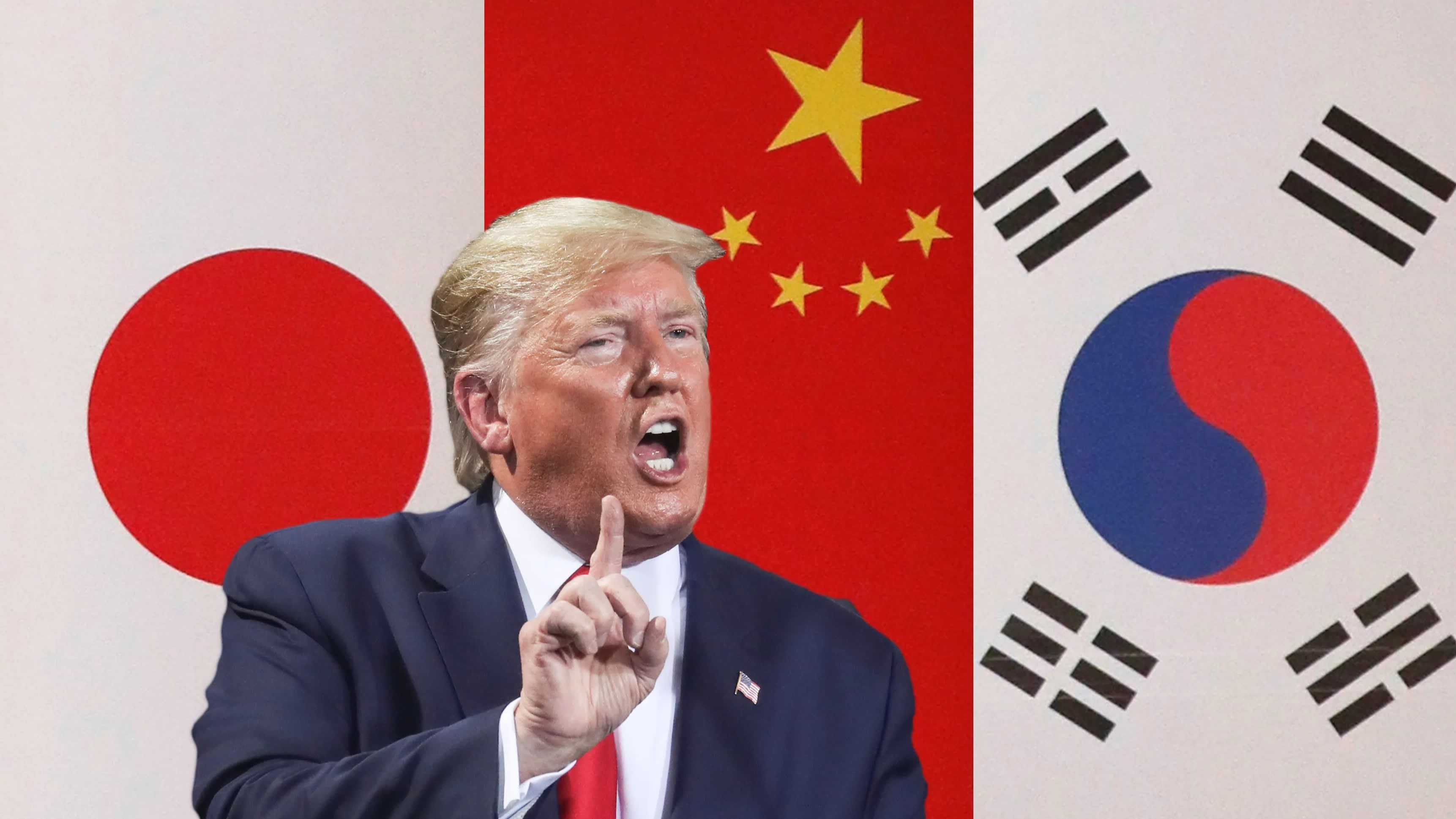 Business leaders in East Asia expect U.S. President Donald Trump to be reelected but see less chance that his trade war with China will ease. (Nikkei montage/Source photo by Reuters)

Trump's reelection was forecast by 89% of Japanese executives, compared with 76% of South Korean and 71% of Chinese business leaders.

Of Japanese executives who expect Trump's reelection, 41% said the trade war would "seriously" or "slightly" escalate. This compares with 49% of Chinese executives and 30% of South Korean managers who share the same view.

The survey of East Asian executives also found that more than two-thirds of South Korean business leaders said they expect the relationship between Japan and South Korea to improve this year, much higher than 49% of Japanese counterparts.

The survey was conducted from Nov. 28 to Dec. 16 by Nikkei, South Korea's Maeil Business Newspaper and China's Global Times, which is owned by the People's Daily, a mouthpiece of the Chinese Communist Party. A total of 314 top executives were surveyed. The finding suggests that many top executives of the three countries expect the U.S.-China struggle for hegemony to become a new normal. If U.S.-China trade tensions continue, 44% and 23% of Japanese and South Korean leaders, respectively, said they would change their production sites and procurement partners.

In China, 32% of business leaders said they would reconsider investing in affected operations. Passing on tariff hikes to customers and reviewing production locations and procurement processes were also mentioned by more than 20%.

The majority of South Korean executives surveyed, 71%, said they expect relations between Seoul and Tokyo to improve.

Japanese Prime Minister Shinzo Abe and South Korean President Moon Jae-in met in December for the first time in about 15 months but failed to outline a specific process toward improving ties. Korean Air Lines and five other South Korean carriers made losses in the July-September quarter because of a plunge in tourist traffic between the two countries. Korean Air, the nation's biggest airline, had said it faced a tough business environment in the last quarter of 2019.

Japan's restrictions on semiconductor exports to South Korea are hitting companies on both sides. For the year to March 31, for example, Sumitomo Metal Mining lowered its earnings projection by a large margin, citing an unexpectedly sharp fall in the shipments of electronic materials used in smartphones.

The Japanese government is making final preparations to host Chinese President Xi Jinping as a state guest in April. The relationships between Japanese and Chinese companies are also expected to improve on the back of warming bilateral ties.

Relations between the two countries this year were forecast to "slightly" improve from last year by 47% of Chinese business leaders and 37% of Japanese. In addition, 9% of Chinese predicted a "great improvement" in comparison with 3% of Japanese. These numbers suggest that Chinese executives are willing to establish closer ties with Japan amid the U.S.-China trade war.

Among other key findings, 55% of Japanese and 67% of South Korean business leaders regard artificial intelligence as the most important new technology, while the ratio is 30% among Chinese executives.

In China, robotics was mentioned by 11%, blockchain by 10% and fifth-generation mobile network by 9% in addition to AI, reflecting China's strategy to become the world's No. 1 country in a variety of advanced technologies. The Chinese government announced its "Made in China 2025" strategy in 2015 and has since been generously offering subsidies to promote AI and other high-tech sectors. Financial support from the government has helped to bolster companies' interest in such technologies.

The finding is attributable to an increase in Chinese companies seeking to cut reliance on overseas technologies. In September, e-commerce giant Alibaba Group Holding announced the development of a new chip that will speed up AI processes.

In contrast, 80% and 78% of Japanese and South Korean companies, respectively, replied that they would develop such technologies jointly with other companies.