Japan Inc. sniffs the fresh scent of inflation in the morning Coffee beans are now objects of obsession. These particular beans are roasting at a stand at the Coffee Fair in Lima, Peru, on Aug. 25, 2017.   © Reuters
SATORU NIHEI, Nikkei staff writerMarch 5, 2018 14:30 JST | Japan
CopyCopied

TOKYO -- Corporate Japan has woken up and smelled the specialty coffee market.

It is responding with high-end roasters, home deliveries of green beans and expensive coffee makers. One time-honored operator of low-priced cafes has even proven its nimbleness by starting a new chain, one that is pleasing the new-wave coffee sippers.

"It smells really good." The remark came from a guest who was visiting Panasonic's showroom in Tokyo's Ariake bayside neighborhood one February day. The space was filled with the aroma of roasting coffee beans. The electronics maker was hosting a promotional event for a home roaster that it released in June.

An attendant put green coffee beans into the machine, dubbed The Roast, then used a smartphone app to select a roasting level, such as light, medium or dark. In a few minutes, dark-brown beans dropped into a transparent compartment. No smoke was released.

The Roast, which costs 100,000 yen ($934), has sold 200 units since it debuted. It is especially popular among middle-aged and senior caffeine addicts. 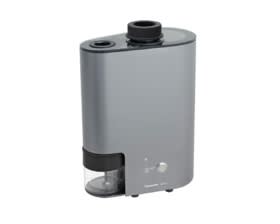 Japan's coffee market is booming, with consumption having set a record for four straight years through 2016, according to the All Japan Coffee Association, a promotional body.

Although intake was slightly down in 2017, coffee has grown into a 2.9 trillion yen market in Japan.

The boom became apparent around 2013, when many consumers began buying inexpensive, fresh cups of brew at convenience stores.

Less noticed were the aficionados who, rather than buying inexpensive and convenient jolts of joe, began seeking out pure coffee experiences. These connoisseurs were paying attention to what countries, farms and elevations their beans came from. The newly converted wanted to know how the beans were then roasted and how long they had "rested" after being roasted. These buffs even became persnickety about grinding methods, water temperature and how the water mingles with the grounds.

Now Panasonic is giving these discerning drinkers control over their morning rituals.

It is even collaborating with bean wholesaler S. Ishimitsu so machine owners can receive regular deliveries of green beans selected from around the world. QR codes are printed on packages so users can call up information on the beans and get roasting recommendations from coffee experts. 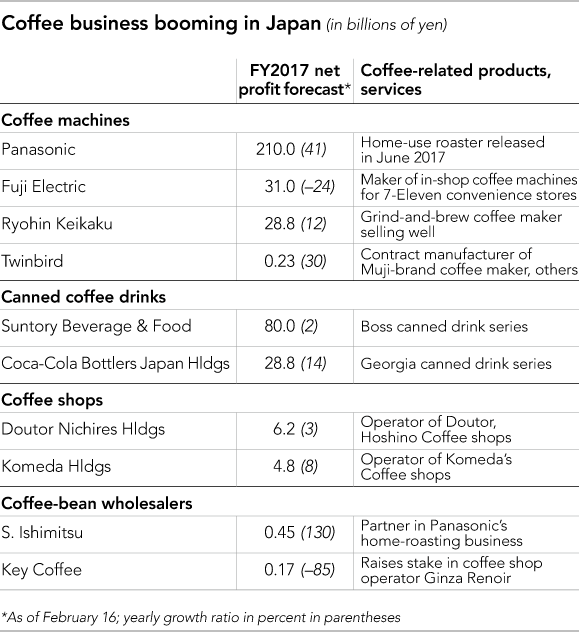 High-end coffee makers are also selling well. A grind-and-brew machine from Muji, a chain of design-minded stores operated by Ryohin Keikaku, costs 32,000 yen. Muji sold 25,000 of them in the nine months after the item's introduction. Stores often sold out of the machine during the first several months after it went on sale.

Decades ago, Japanese were satisfied by instant coffee or drip coffee made from any old bean. A turning point came in 1996, when Starbucks arrived and introduced the country to specialty coffee.

More recently, a growing number of coffee drinkers have begun paying attention to the characteristics of coffee beans and to the art and science of roasting the beans and hand-dripping hot water over the grounds. 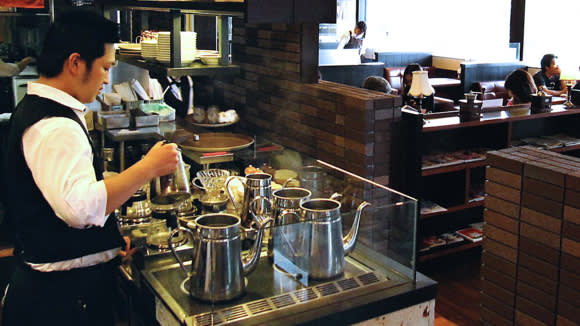 Hoshino Coffee shops are a far cry from their sister chain Doutor.

A cup of coffee at Hoshino costs 600 yen, much more than the 200 yen or so for a basic cup of coffee at a Doutor shop. But Hoshino's time-consuming "pour over" process has captured consumers' fancy. The Hoshino chain now has 200 or so shops across the country.

Hirofumi Obayashi, chairman of Doutor Nichires, insists coffee shops can be successful by following any of countless approaches. The Doutor chain itself was a coffee pioneer of its day. The brand became known for its inexpensive but dependable offerings. 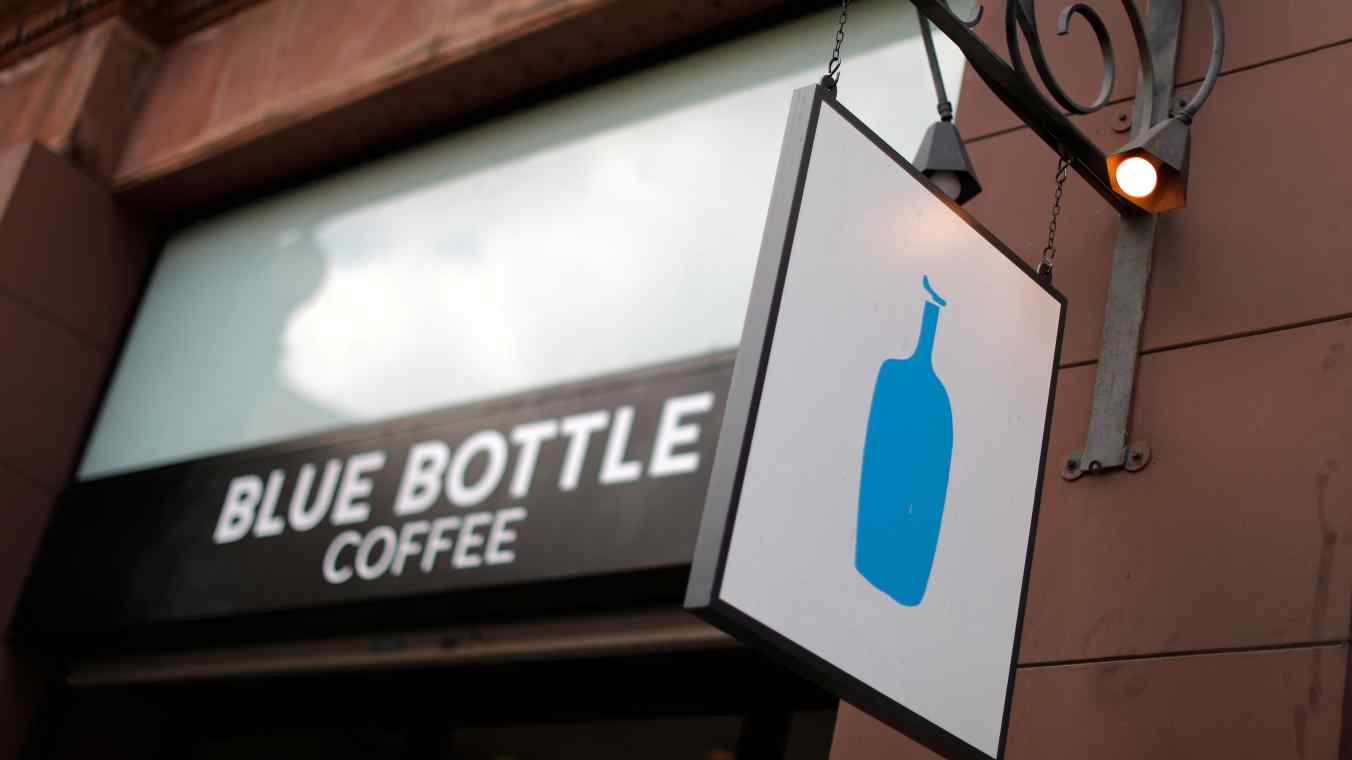 In China, coffee is a brewing success

Today that model faces intense competition, and Obayashi says that to compete, cafes have to go high-end.

The company recently launched two other new chains, a higher-end Doutor brand whose stores have coffee farmlike settings and Oslo Coffee. Why Oslo? Norway is the world's No. 1 coffee consumer, and the Japanese chain is trying to mimic Scandinavian culture.

Japan's coffee market is going in other directions, too. Skylark, a chain of family restaurants, began a resort-style cafe chain in 2015. This month, convenience chain 7-Eleven, known for its cups of "$1 coffee," plans to increase the amount of beans it uses to brew each cup by 10%. And rival chain Lawson is keen to promote single-origin coffees that cost around 500 yen per cup.

It might be time for the Bank of Japan, which has been struggling to get prices rising for years now, to wake up and smell the inflation in this niche market.