TOKYO -- Businesses in Japan and other Asian countries are using more robots and machines than ever to replace and reduce human contact as the COVID-19 pandemic lingers.

Japanese restaurant chain Watami is one such business, having introduced service robots in October on a trial basis in its newly opened BBQ chain Yakiniku no Watami in Tokyo and neighboring Kanagawa prefecture.

The robots, called Peanut, are each about 120 cm tall and have three inbuilt shelves on which plates can be delivered to and from tables and the kitchen. The robots can calculate the shortest route using artificial intelligence and deliver dishes to three tables from the kitchen.

The Japan System Project, which started selling Peanut in March in the country, said the number of enquiries it has received have doubled from May, mostly from restaurant businesses and factories.

"Due to COVID, more businesses are considering robots as a way to avoid human contact," said a company representative, adding that Japan System Project has already sold 15 units of Peanut, which is each priced at 2 million yen ($19,000). Keisuke Yamane, managing director at Accenture, said the pandemic has accelerated demand for robots in different industries. "Many companies in diverse sectors from hospitals to delivery services are experimenting with robot usage and seeking the most appropriate way to work them," Yamane said.

Electronics manufacturer Omron in June began selling robots originally designed to move goods around in factories to its partners that wanted to repurpose them for use during the pandemic.

These partner companies added ultraviolet sterilization lamps to the robots and supplied them to end-users like hospitals and schools. Omron said it has sold robots in over 20 countries, half in the Asia-Pacific region including China, South Korea, Indonesia, Thailand, Vietnam and India.

The company declined to disclose how many robots it has sold, but "several hospitals had started introducing robots over the world," said an Omron official.

For Japan, the use of robots also addresses a long-standing issue of chronic labor shortage among a rapidly aging population. 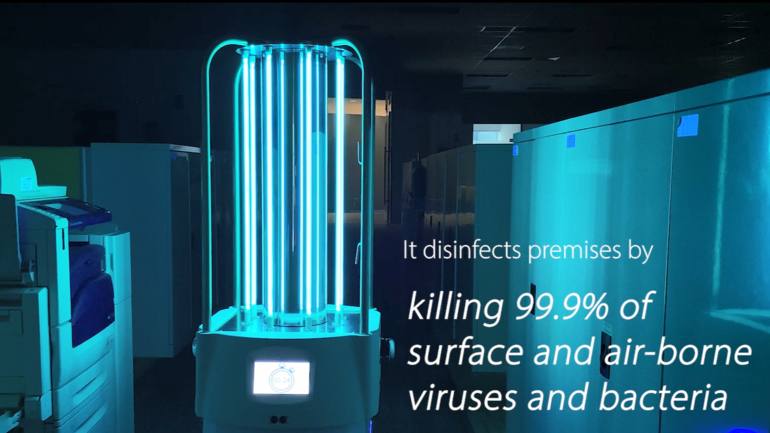 Electronics manufacturer Omron in June began selling robots originally designed to transport goods to companies that repurposed them by fitting ultraviolet sterilization lamps on them for use in sanitizing hospitals and schools. (Photo courtesy of Omron)

In October, Japan Post Holdings conducted an experiment in the Tokyo area to see how feasible it would be to use robots to deliver mail. In the experiment, a robot traveled a distance of approximately 700 meters on pavements at 5 kilometers per hour, dodging pedestrians using sensors and cameras.

Japan Post has been seeking a way to reduce costs as it has become harder to recruit and retain staff. Using robots and machines is a long-term survival strategy, said a representative.

"The pandemic has changed people's mindset and more people started to think that robots can replace work that has been long done by humans," the representative said.

SoftBank Robotics is another company hoping to cash in on the trend. It will start selling serving robots, or "Servi," from January. Equipped with high-quality sensors and cameras, robots can help waiters to serve meals and drinks in restaurants. The company said restaurants will need half the number of serving staff if they use Servi.

Restaurant chain operator Monogatari Corp. will employ the use of 443 Servi robots in 310 restaurants from January. "The introduction of the robots is intended to improve productivity and to help prepare for the future decline in the labor force," said the company.

Market researcher Fuji Keizai Group said that globally, the amount spent on purchasing service robots would rise to 4.6 trillion yen by 2025 from 1.9 trillion yen in 2019, thanks to increased use of them in the households and in medical and logistics industries.

Elsewhere in Asia, robots are also in demand. In Thailand, hospitals have been using "ninja" robots to ease the burden on medical workers and doctors. These were initially developed to monitor stroke patients but have now been developed to take patients' temperature and also used as telemedicine tools, allowing doctors to assess patients via video chat.

Tomomasa Sato, chairman of RobiZy, a nonprofit organization that promotes the use of robots and robotics, and professor emeritus at the University of Tokyo, said the pandemic has brought to fore the need for robots.

"The society is at a tipping point and will dramatically change," said Sato. "Using robots in many industries is not temporary. This trend will be here to stay."