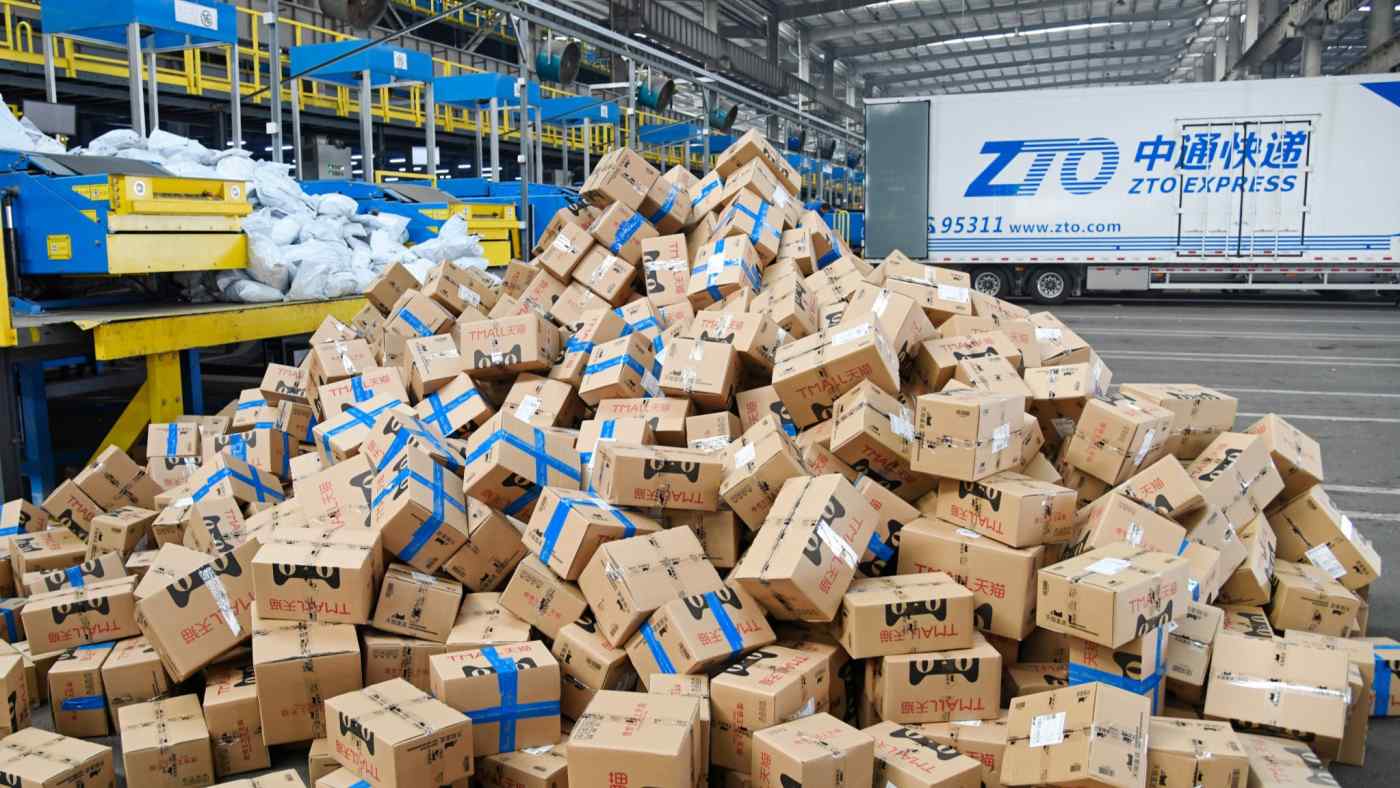 HONG KONG -- Demand for courier services has boomed in China this year with a boost from the coronavirus pandemic but this has only heightened a brutal fight for market share.

The number of parcels delivered in the country during the first 10 months of the year was 64.38 billion units, an increase of 29.6% from the same period a year earlier, and already exceeding the full-year level of 2019, even after a decade of double-digit growth.

The expansion in volume, however, has not necessarily translated into an increase in revenue. Overall revenue from parcel deliveries for the 10-month period increased 16.5% from a year earlier to 690.98 billion yuan ($105 billion), still short of the level for all of 2019.

The main culprit: a price war brought on by harsh competition, which has a bigger impact on some players.

"We had a challenging third quarter," said Johnny Chou, founding chairman and CEO of New York Stock Exchange-listed logistics company Best Inc., during an online earnings briefing on Friday. The company's revenue for the July-September quarter edged up 0.6% from a year earlier, while it recorded a net loss of 3.48 million yuan. Chou, also known as Zhou Shaoning, said that Best's "execution did not meet the fast-changing market dynamics, in both operation and the pricing strategy, which led to a lower volume growth and margin."

The company has embarked on restructuring its business portfolio and cost structure. By the end of the year, Best will shut down its Store+ business, a loss-making segment that has been offering online merchandise sourcing and store management services for convenience stores since 2015.

It is also shifting its focus from some of the most competitive markets, including its home province of Zhejiang in eastern China and part of Guangdong Province, to less-competitive provinces such as Shandong, Henan and Anhui.

The company aims to save 200 million yuan in costs by the end of 2021 in order to "prioritize capital allocations toward its core business," Chou said. With other noncore businesses under strategic review, he stressed that "we are in the midst of implementing plans and changes that we believe will make us competitive and maintain our position."

Yunda Holding is in a similar situation. Third-quarter revenue remained essentially flat from a year earlier, while its net profit fell by nearly half year-over-year. Even though the company's delivery volume surged roughly 50% during the third quarter, prices for deliveries dropped more than 30% compared with a year earlier. SF Holding was one of the best performers during the third quarter of 2020, when some of its peers were hit harder by a price war. (Photo by Kenji Kawase)

"In the face of intense industry competition, the company chose to engage in an even more aggressive price policy," Han Yichao, an analyst at Changjiang Securities, wrote in a report earlier this month.

The Shenzhen-listed express courier is taking steps to form a potential alliance with one of its competitors, given the tough environment. Yunda is to pay 614 million yuan to acquire a 6.5% stake in Shanghai-listed Deppon Logistics through a private placement, which would make it Deppon's second-largest shareholder.

STO Express may be the worst hit among China's seven listed express delivery companies. Its revenue fell 5.7% and its bottom line slipped to a 65.47 million yuan net loss in the third quarter. The company issued a statutory disclosure earlier this month when its borrowings during the first 10 months increased by 2.725 billion yuan, more than 20% of its total equity at the end of last year.

The Shenzhen-listed company stressed that the borrowing surge was "a result of normal corporate demands" and that operation of the company remains "firm and steady."

Haitong Securities, an entrusted custodian for the two listed STO Express bonds, issued a separate statement on Nov. 9 in which it vowed to "closely follow the issuer's situation with regard to payments of principal and interest," amid a series of defaults in the domestic fixed-income market.

The stock market appears to have reflected the current situation of the major listed express delivery companies. Since the beginning of the year, Best had lost 52% of its market value through Nov. 23, followed by a 34% decline for STO Express and a 29% drop for Yunda shares. 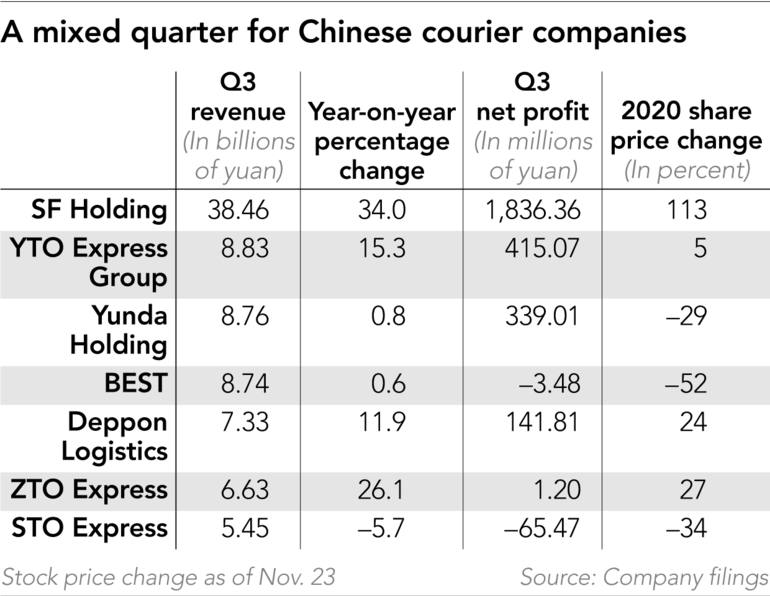 Meanwhile, other delivery companies that are holding on comparatively better are performing well on the stock market.

For SF Holding, the third quarter was another bumper period, in which revenue grew 34% and net profit surged 52% on a year-on-year basis. Of the 27 analysts surveyed by QUICK-FactSet, revenue for the full year is forecast to reach 153.6 billion yuan and net profit 7.4 billion yuan, increases of 37% and 28%, respectively.

While the company's unit delivery price dropped 15% in October, it was a smaller decline than its rivals suffered. SF Holding's volume increased 57% for the month, outpacing its peers.

Shen Xiaofeng and Yuan Ding, analysts at Huatai Securities, wrote that Shenzhen-listed SF Holding is able to set a more stable price for its special services, while its cost structure is leaner than its competitors'. The analysts have given the stock a "buy" rating with a target price of 102.47 yuan, 30% higher than Monday's close.

Lai Meisong, founder and CEO of ZTO Express, predicted last Thursday in an online earnings call that bifurcation in the sector is "inevitable" and will eventually lead to consolidation into a few players, each with market shares of 30% or more. 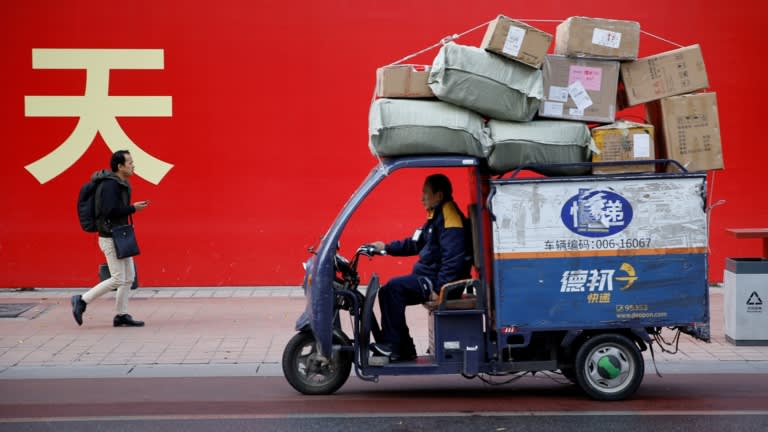 ZTO Express saw its net profit drop 8% in the third quarter, while its revenue grew 26%, not far off SF Holdings' 34% growth. Lai is confident that his company will be one of the ones to survive. He believes that after the fierce price wars are over, "capacity will be the determining factor," an area in which he is investing heavily.

Thomas Chong, an analyst at Jefferies Hong Kong, wrote in a note on Monday that "it is becoming more and more difficult for smaller logistics service players to compete with leading giants due to lack of scale and infrastructure, as well as working capital." His two major picks are ZTO Express and SF Holding.

Investors will be keeping their eyes on Alibaba Group Holding, which is invested in multiple express delivery companies, such as STO Express, YTO Express Group and Best.

At Friday's conference call with Chou of Best, an analyst raised the issue of a potential merger between Best and other companies under Alibaba's umbrella.

"I really can't speak for Alibaba," Chou responded. Pressed again, Chou said: "I don't know how to answer this question" but added that "as the market grows, the market will work it out for itself."

Alibaba did not immediately respond to a query from Nikkei Asia about its express delivery companies.