Shoppers browse at a Seven-Eleven convenience store, which like other chains has sought to attracted international visitors to Japan.
Nikkei staff writersMarch 21, 2018 04:50 JST | Japan
CopyCopied

TOKYO -- Convenience stores, long among the most successful competitors in Japan's retail industry, continue to lose customers to drugstores and e-commerce.

Overall customer traffic at seven major convenience store chains dropped on the year for a 24th straight month in February, the longest slump since the Japan Franchise Association began collecting the data in 2004.

Same-store customer numbers fell 1.4% for February, as the three leading chains -- Seven-Eleven Japan, Lawson and FamilyMart  -- all logged declines, the association reported Tuesday. The data covers stores open for at least one year.

Top-ranked Seven-Eleven Japan saw an eighth consecutive month of declines, as did Lawson, while FamilyMart's footfall dropped for an 11th straight month.

Japan's convenience store market continued to expand in 2017, with sales reaching 10.6 trillion yen ($100 billion), but growth slowed to 1.8%, according to the association.

In contrast, drugstore sales are forecast to grow 5.5% in fiscal 2017 to reach 6.85 trillion yen. Drugstores have attracted customers from convenience chains by offering more fresh foods and increasing the number of 24-hour locations. Meanwhile, e-commerce sales at Rakuten, Yahoo Japan and Amazon Japan totaled about 6.7 trillion yen in 2017, jumping 13% from a year earlier. 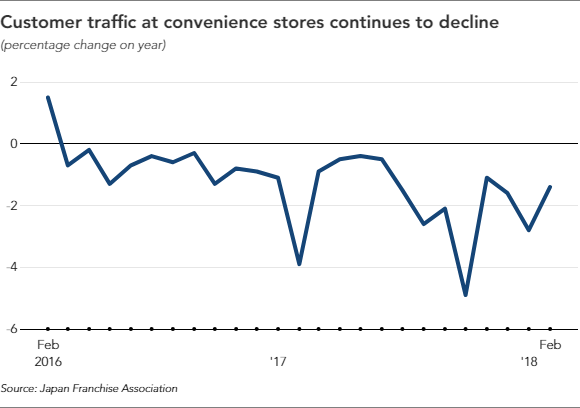 Convenience chains still lifted sales last year thanks to a 1.5% increase in store numbers to 55,395. But this strategy has proven to be a double-edged sword by saturating the market further.

The stores look to fight back by offering new services. Seven-Eleven intends to place 5,000 bicycles for a bike-sharing service at 1,000 of its locations by end of fiscal 2018. FamilyMart plans to set up laundromats at 500 of its stores by the end of fiscal 2019.

Seven-Eleven Japan is part of Seven & i Holdings, while FamilyMart is owned by FamilyMart Uny Holdings.