Rental clothes add a new wrinkle to fashion in Japan TOKYO -- Rental clothing services are taking off in Japan as consumers tighten their belts and youths find different ways to stay well-dressed.

Fashion brand Renown announced on July 10 its entry into the rental apparel market with a flat-rate monthly service, to be followed by upscale department store operator Isetan Mitsukoshi with its own rental clothes in August.

Targeting mainly younger Japanese, whose consumption habits are increasingly based on usage rather than ownership, companies that deal in clothing are adopting the monthly subscription model to market their wares.

"From the age of buying clothes, we have entered the age of renting them," said Renown's customer relations and corporate communications head Tomohiro Nakagawa at the launch of the company's latest rental service, which involves men's business suits.

Dubbed kirudake, or Just Wear It, the service costs between 4,800 yen and 9,800 yen ($43 and $87) per month, with a minimum six-month contract. The 4,800-yen option covers two suits per season: spring-summer and fall-winter. After the term expires, Renown sends suits for the next season, cleaning and storing the returned items.

With each suit priced at around 60,000 yen, men can dress to the nines at less than half the normal cost. Renown also offers advice on coordinating suits, shirts and neckties, as well as clothing care. 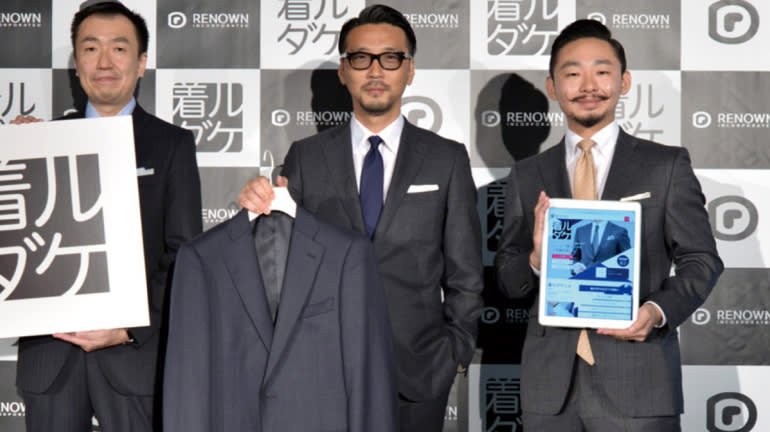 Not owning suits reduces maintenance time and eliminates the chore of storing out-of-season clothes. After two years, the suits will be replaced with new ones from Renown's collection. The customer can either return the previously worn items or purchase them.

As workplaces grow more casual and government-led reforms promote comfortable office wear, demand for business suits has slackened. According to Japan's Ministry of Internal Affairs and Communications, annual expenditures on suits have declined by about a quarter over the past 10 years to fiscal 2017.

Moreover, office workers are reluctant to spend tens of thousands of yen on a suit that might only be worn for presentations or official functions. By making quality suits easily accessible, the company thinks it can jump-start demand.

Sales are slowing in retail apparel overall, but Renown thinks the monthly subscriptions can prevent inventory buildup and price-slashing that would undermine financial results. It forecasts that 3,000 subscribers are enough to make the new service profitable.

Other retailers have joined the fray. From April, major menswear retailer Aoki began a subscription service called Suitsbox. For 7,800 yen per month, customers can rent a complete ensemble comprised of a suit, shirt and necktie.

The service has been a hit, with the original goal of 10,000 subscribers by March 2021 likely to be achieved a year ahead of schedule, according to Daisuke Naganuma, business director for Suitsbox.

Department stores, which have previously avoided rental and sharing economy-related businesses, are gradually warming to the idea. They hope to attract young shoppers who have been flocking to online stores like secondhand marketplace Mercari or Zozotown, which offers custom-fit clothes.

Younger consumers are also growing less accustomed to wearing out their clothes. So-called "one-shot buyers" purchase clothes only for social media photos, after which they sell them online.

To counter this trend, Isetan Mitsukoshi, whose clothing sales have fallen year-on-year over four years to 2017, will begin a clothing subscription service out of the Ginza branch of its Mitsukoshi department store between August and November.

The venerable establishment is targeting women in their 20s and 30s in need of something upscale for weddings or other special occasions. The service features about 180 items over 10 brands, including those from well-known designers, with more possibly added in December.

"We want young people to experience brands they might otherwise believe to be out of reach, giving them new options," according to Isetan Mitsukoshi. Getting young people to visit department stores again could be the first step in reviving the operator's online and in-store sales.

Music streaming services helped pioneer this type of business model in the early 2000s. Now, subscription services extend to high-end bags, expensive women's fashion, clothing for special occasions and casual wear. But as Mercari and its peers increase customers through easy smartphone accessibility, the next battleground for evolving Japanese retailers promises to be convenience.