The war is on to get a slice of $1.4 trillion new demand The Lucid Air is a luxury electric sedan developed by Lucid Motors, a startup managed by a former Tesla executive. It is the company's first electric vehicle to hit the market.
KENJI ASADA, Nikkei staff writerMarch 6, 2021 17:09 JST | Japan
CopyCopied

TOKYO -- The accelerating trend to e-mobility will lead to a paradigm shift in the global car market that could radically change the landscape for the industry.

Tesla has emerged as the early leader in the high-stakes electric vehicle race, topping the list of EV manufacturers. No Japanese manufacturer is among the top 10.

Apple is developing its own electric vehicle, while many scrappy newcomers are charging into the market in both the U.S. and China. Japanese players are struggling to keep up with the shift, which is expected to add 150 trillion yen ($1.4 trillion) in new value to the industry.

Future cars, which will be more connected, autonomous, shared and electric -- the combination of key features known as CASE -- will be armed with artificial intelligence and state-of-the-art information technologies.

Unsurprisingly, a bevy of information technology giants are seeking to stride into the market. Apple is not the only one. In China, IT powerhouses and automakers are working together in developing smart electric vehicles. Alibaba Group Holding has set up a joint venture with SAIC Motor, the country's largest car company, and Shanghai Zhangjiang Hi-Tech Park Development, an investment arm of the city government.

Ride-sharing company Didi Chuxing has launched a pure electric sedan with BYD, China's largest EV producer, while Baidu, best known for its internet search engine, has teamed up with Zhejiang Geely Holding Group, China's largest private automotive group, in a foray into the market. Smartphone maker Xiaomi has announced it is also weighing an entry into the race.

Sony has unveiled a prototype electric car, the Vision-S, which packs an array of technologies, even though the company has not announced any plan to enter the market. The sedan, which uses parts and technologies supplied by many international partners as well as Sony's own, was manufactured by Magna Steyr, an Austrian automobile contract manufacturer, and others. Sony has already started public road testing of the prototype. The market is already crowded with brand-new startups in addition to companies with solid track records like Tesla and Karma Automotive. Capitalizing on a growing flow of investment funds from the booming stock market, some are making aggressive strategic moves like purchasing plants and other infrastructure from General Motors and other established auto giants.

China has become the world's largest EV market, with over 1.3 million units sold in 2020. The Chinese EV market is also swarming with startups, three of which -- Nio, Xpeng and Li Auto -- have gone public in the U.S., raising a billion to several billion dollars.

In the current global auto market, Japanese makers have a huge presence. Of the 10 largest auto groups in terms of global unit sales in 2019, three were Japanese, including the Renault-Nissan-Mitsubishi alliance. In 2020, the Toyota Motor group, which includes Subaru, likely topped the list with global sales of 10.4 million vehicles. But the Japanese presence is slim in the rapidly expanding EV landscape. In 2020 Tesla was by far the largest worldwide seller of electric vehicles, including plug-in hybrids, followed by Volkswagen, which rolled out its strategic EV model ID.3 during the year. U.S., European and Chinese makers occupied all of the top 10 slots on the list of the bestselling EV brands, with no Japanese name found.

As most major countries have announced policy incentives to promote green cars, the market for electrified vehicles such as all-electric, hybrid and fuel-cell vehicles is bound to keep ballooning in the coming years.

Vehicles that use one or more electric motors for propulsion will account for 58% of global car production in 2030, up from 8% in 2019, according to a forecast by the Japanese unit of U.S. consulting firm Arthur D. Little (ADL). The share of pure electric vehicles will grow to 14%, while the output of gasoline- and diesel-powered vehicles will shrivel.

Despite the wholesale shift to electric vehicles, sales of hybrid vehicles will also keep growing because the life-cycle environmental impacts of EVs differ from country to country, depending on each nation's mix of power sources. Much of the gain will come from technological innovations related to CASE features.

By value chain, new services like car sharing and mobility services will produce 60 trillion yen of additional value, while new components such as batteries, motors, semiconductor devices and sensors will add 31 trillion yen. Research and development will generate 30 trillion yen in new value.

In contrast, the total value of assembly and sales will grow only marginally. In other words, the future of automakers will hinge on whether they can develop competitive new materials and parts and offer innovative services. It is often said that this paradigm shift in the auto industry will expand horizontal division of labor in parts production and lower their prices.

To test this theory, Nikkei, with the help of MarkLines, a Tokyo-based company that carries out teardowns of finished cars for cost and other analyses, has analyzed the cost structure of electric vehicles and compared it with that of gas-powered cars.

"Since batteries for EVs are far costlier than gasoline engines, EV prices will remain much higher than those of gas-powered cars even if their sales grow," predicted Masatoshi Yoshikawa, an executive officer at MarkLines.

The costs of the body and the interior, which are basically common to all types of cars, are around 750,000 yen. Parts and materials used only for EVs, such as batteries and inverters, cost nearly three times more than components used only in gasoline cars, including engines.

The market for batteries and electric motors used in EVs will likely soar ninefold in the next 10 years or so, while that for sensors used for autonomous driving will surge 170%. But global production of engines and bodies is expected to remain mostly flat. As sales of EVs increase to dominate the overall auto market, demand for engines and related parts will evaporate.

Chinese and South Korean makers like Contemporary Amperex Technology, better known as CATL, and LG Chem are ramping up their presence in the crucial and lucrative market for EV batteries.

Developing and manufacturing EV batteries requires tens of billions of yen in investment, which means only companies with huge financial muscle can enter the market, where price competition is fierce.

Among Japanese makers, Panasonic, which supplies batteries to Tesla, has managed to establish itself as a player to reckon with by maintaining the No. 3 position.

But Japanese battery makers are in danger of being locked out by foreign rivals. CATL plans to expand its production capacity by five times in the next five years. 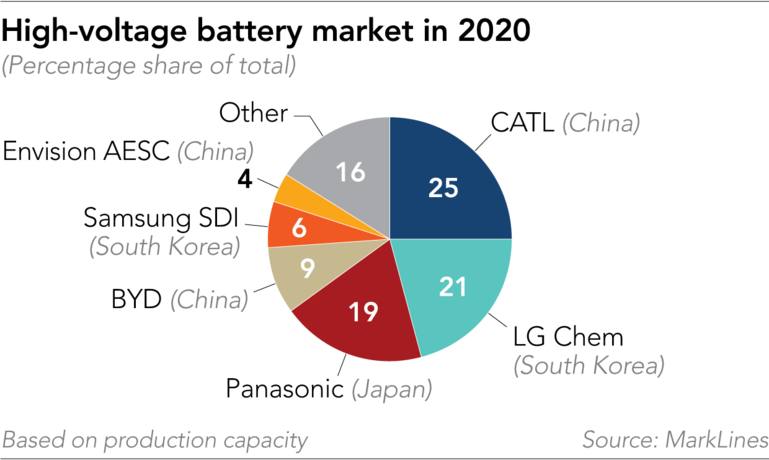 This paradigm shift is posing a life-threatening challenge to Japanese carmakers, which for decades have been cranking out competitive vehicles through vertically integrated supply chains known as "keiretsu," usually close-knit webs of companies linked by equity ties, investments and other business relationships.

But the trend toward electrification will relentlessly accelerate horizontal partnerships among carmakers and suppliers of parts, software and other elements needed to make green cars.

Riding on the wave are some major suppliers and contract manufacturers that provide products and services to automakers across the world, such as Canada's Magna International, a mobility technology company for automakers, and Germany's Bosch and Continental.

This radical structural change in car manufacturing will steadily erode the competitive edge of Japanese carmakers, putting strong pressure on them to reinvent their business strategies and models for their long-term viability.

While the biggest driving force behind this shift to electric vehicles is the need to reduce carbon dioxide emissions, there are some caveats about the environmental benefits of electric vehicles. Unless carbon emissions are curbed at power plants, the source of energy for EVs, the vehicles will not do much to help countries build a carbon-free future.

Akio Toyoda, Toyota Motor CEO and head of the Japan Automobile Manufacturers Association, said the goal is hard to achieve without a "radical reform of the government's energy policy." He pointed out the need for policy debate on such issues as the power generation methods used by utilities and the infrastructure for charging batteries.