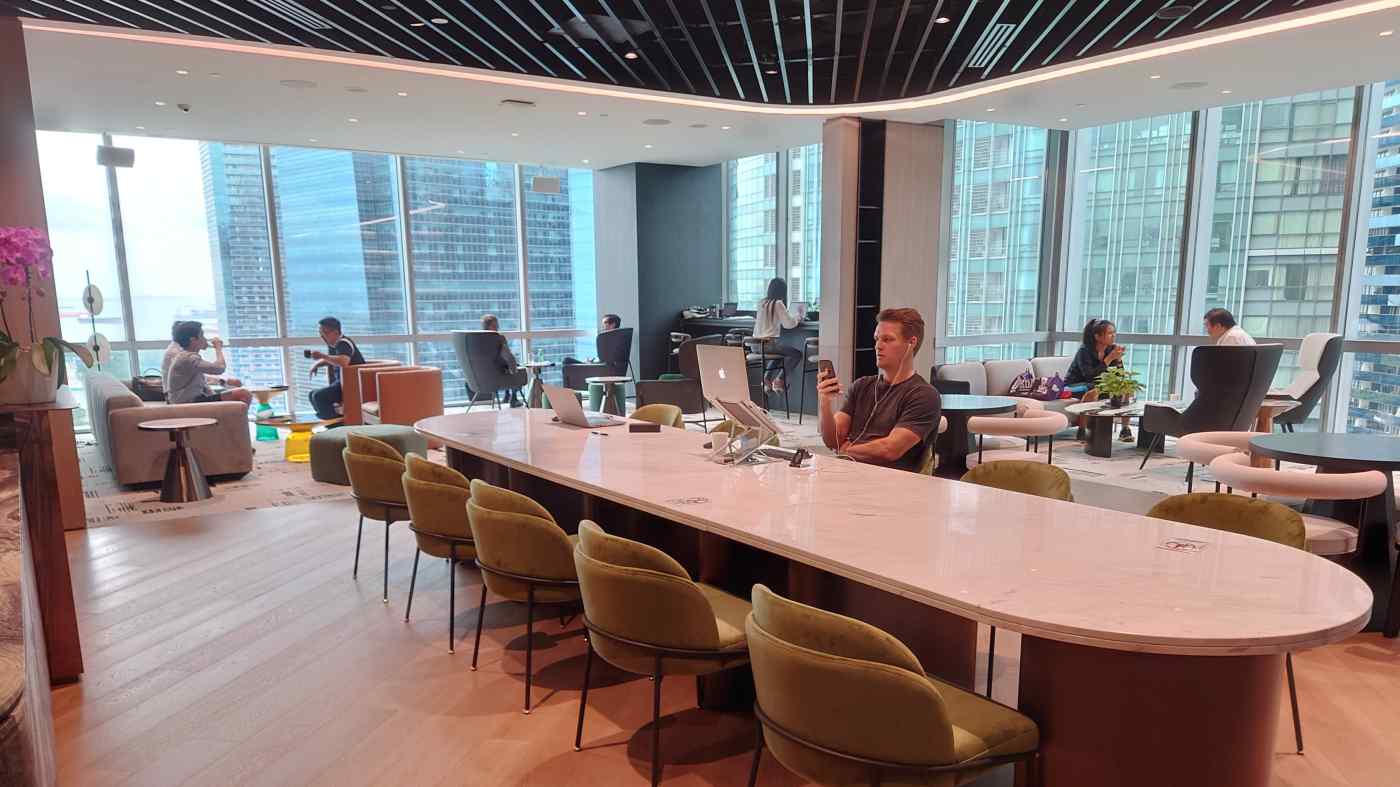 Down the road from the city-state's stock exchange, and with a commanding view of the famed Marina Bay Sands hotel, it is decked out with cushy seats paired to tables bearing vases of flowers. Reception hosts offer visitors refreshment towels and bottles of Evian mineral water.

The whole setup is intended to convey a sense of "serious business," Matthew Chisholm, chief operating officer at Arcc told Nikkei Asia in an interview -- drawing a contrast with the more informal look that has become associated with coworking offices.

"[You are] very unlikely to see beer kegs in Arcc Spaces' places, slogans on walls and hipsters in flip-flops," Chisholm said. "We consider ourselves an innovator in premium flexible workplace as defined by our customers, who are typically established businesses."

While coworking spaces elsewhere typically mushroom with the presence of startups and young entrepreneurs, Arcc's clientele is made up of "reputable companies" from sectors like banking and finance, media and telecommunications, Chisholm said.

Arcc's strategy is to carve out a niche in a crowded landscape -- which Chisholm said his company has been doing since 2003, having also established a presence in mainland China, Hong Kong, Malaysia and Myanmar.

Arcc is not alone in betting on Singapore for its latest stage of growth. In November, U.S. workspace operator Industrious and SIN Capital, a Singapore-based investment firm, announced a 30,000 sq. foot development near Orchard Road, the city-state's prime shopping belt. It has been slated to open in the second quarter of next year.

"Businesses are increasingly looking for flexible workspace options that are accessible on whatever terms work best for them," said Jaime Hodari, chief executive and co-founder of Industrious. According to data from investment management company Colliers International, Singapore had one of the lowest office market vacancies in the first quarter of this year among Asia's financial hubs, at 3.1%, even as the COVID-19 pandemic tightened its grip.

Hong Kong logged 7.3%, Shanghai was at 19.2% and Beijing at 16.7% in terms of vacancies during the period. Tokyo did better than Singapore, with vacancy rates at 1%. The drawback for the Japanese capital, however, has been the cost involved in setting up workspaces.

Real estate services company Cushman & Wakefield noted in a report released in December that Tokyo was the most expensive market in the Asia-Pacific for fitting out offices, at an average cost of $201 per sq. foot, compared to Hong Kong at $130 per sq. foot and Singapore at $112.

Given these numbers, Singapore sees itself as a sweet spot for workspace operators amid a COVID-induced commercial real estate slump, as companies have cut down on office space and retreated to work-from-home arrangements to shield employees from the effects of the virus.

"As a first step, Singapore is a soft landing into Asia generally," Jonathan Wright, director for flexible workspace consulting in Asia at Colliers, told Nikkei. "It creates a great platform from which to create a regional business."

But doing business in this field has its challenges. Doubts have been cast over the viability of coworking providers by the boom and downfall of U.S. operator WeWork. The SoftBank-backed company's attempt at an initial public offering collapsed last year, as it failed to turn profits after aggressively expanding globally on investors' funds.

After putting more than $10 billion into WeWork, SoftBank suffered large losses in the January-March quarter with a sharp decline in WeWork's valuation as well as its credit risk.

In Singapore, WeWork has held its presence steady despite its woes. It operates more than 10 facilities in prime locations, including Anson Road, Cross Street and Battery Road. 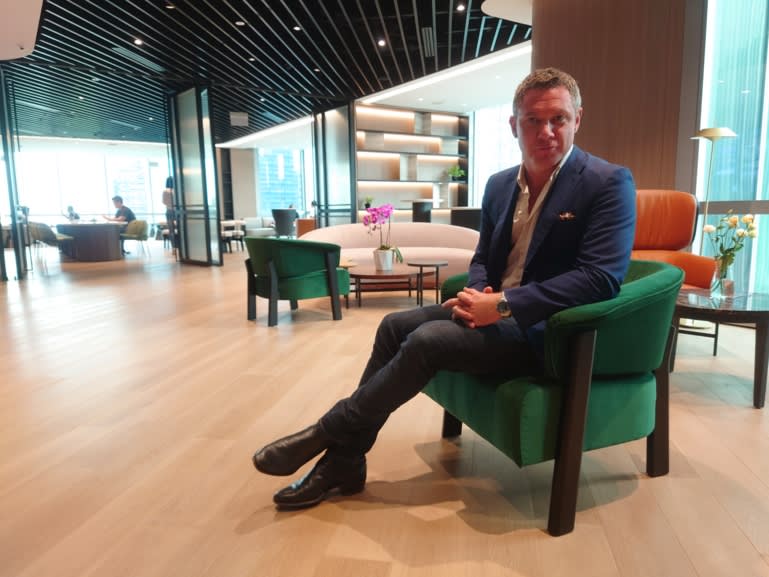 Matthew Chisholm, Chief Operations Officer at Arcc Spaces says his company's clientele is made up of companies from sectors like banking and finance, media and telecommunications.   © Dylan Loh, Nikkei Singapore Bureau

The pandemic has not made things any easier for the coworking sector.

Cushman noted that demand for prime "Grade A" office space within the Asia-Pacific declined 45% -- from 10.1 million sq. feet in the first three months of 2020 to 6.9 million in the second quarter as COVID's effects intensified in the region. In Singapore in the third quarter of the year, Cushman observed that prime office rents declined by 5.1% quarter-on-quarter -- a sign of the continuing slump in commercial real estate.

"COVID-19 has exposed pockets of weakness which emerged since the start of the year and accelerated the earlier predictions of a weakening of the office market," said Mark Lampard, head of Singapore commercial leasing and regional tenant representation at Cushman.

Based on projections from analysis outfit 360iResearch, the global coworking spaces market is expected to shrink from US$9.27 billion in 2019 to US$8.24 billion this year.

Arcc's Chisholm knows the pressures the workspace industry is facing. His company delayed the opening of its newest facility in downtown Singapore from April until August, racking up SG$200,000 in monthly bills a month as the space sat devoid of tenants. Around the time of launch, Arcc secured enough customers to fill about 30% of the property's availability, and is on the hunt for more.

Chisholm said his company has always expanded cautiously, only setting up workspaces where demand was present. 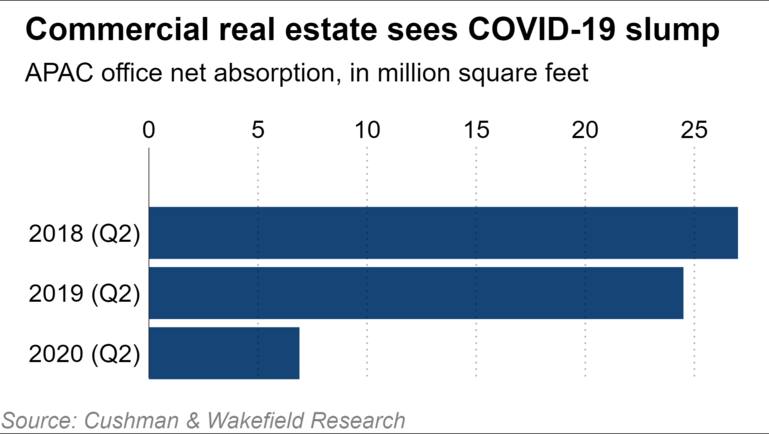 The company has no plans to raise more funds through a public listing, preferring to remain privately held. While declining to provide specific figures, Chisholm said Arcc has averaged profitability growth in "double digit" percentages over the past three years.

"We have a lot more experience in Asian markets in this specific business model than anyone at WeWork ever had, running coworking," Chisholm said. "So I think [what we value is] responsible growth driven by ... real demand, as opposed to speculative investment."

Chisholm said Arcc is looking at opening facilities in cities where it does not have a presence as early as next year, potentially Tokyo and Shenzhen.

The timing might be right, with a rebound expected in the office sector. Real estate insights provider JLL forecasts that 30% of all office space will be consumed flexibly by 2030.

"In a revived post-pandemic market where adaptability is high on the corporate agenda and the purpose of the 'hub' office is centered around collaboration, flexible space demand and growth will return to its impressive pre-COVID rates," Roddy Allan, chief research officer for Asia-Pacific at JLL told Nikkei.

Industry consultancy CoworkingResources noted that while the flexible workspace segment is seeing slower expansion this year players are set to start speeding things up in 2021 at a yearly growth rate of 21.3%.

Arcc's Chisholm is banking on positive forecasts like these to bear fruit and believes the pandemic is not the death knell for workspace operators despite the current slump and doubts over the sector's ability to demonstrate its viability in light of the WeWork saga.

"We are cautiously optimistic," he said. "I don't think that COVID is an excuse for the world's economies to just shut down carte blanche."