Singapore's Temasek and GIC prowl Asia for the next Alibaba SINGAPORE -- Temasek Holdings and GIC, managers of Singapore's sovereign wealth, are putting more emphasis on private equity investments in Asia, which have produced a number of $1 billion unlisted startups in the past few years.

The pair together have taken part in 23 private equity deals in Asia this year, according to Dealogic, and are on track to surpass last year's tally of 26.

Among the deals closed in June by GIC include an investment in Beijing-based Luckin Coffee, a cafe chain seen as a rival to Starbucks, and Viva Republica, the owner of South Korean financial app Toss.

In June, GIC and Temasek together participated in a $14 billion equity financing round by Ant Financial, a fintech company that is part of Alibaba Group Holding.

China represents a key private equity market for both investors, which also have expanded their presence in Silicon Valley. Year to date, Temasek and GIC have closed 13 China deals, 30% of their total for the period, according to Dealogic. Earlier investments by Temasek and GIC in China include some of the country's top unicorns -- unlisted companies valued at more than $1 billion -- such as online services provider Meituan-Dianping and Alibaba-affiliated logistics company Cainiao.

Chinese companies represented 26% of Temasek's total portfolio at the end of March, second only to Singapore in terms of investment weight.   © Reuters

Temasek's investment in Alibaba, which dates to 2011, has paid off for the Singapore wealth manager. As the search for the next Alibaba continues, Temasek took a stake in Chinese biotech startup WuXi NextCODE, which uses genome data to aid drug development, in the fiscal year ended March 2018, according to its annual report.

Chinese companies -- listed and unlisted -- represented 26% of Temasek's total portfolio at the end of March, up from 25% a year earlier. That makes China second only to Singapore in terms of investment weight. GIC, which traditionally gives developed markets heavier asset allocation, had 19% of assets invested in Asia excluding Japan.

Southeast Asia is another region that the Singaporean investors are targeting. Temasek joined Google and others in January in throwing its weight behind Go-Jek, Indonesia's fast-growing ride-hailing company, in a round of venture funding.

"One of the areas that we're excited about is the growth of the digital economy in Southeast Asia," Rohit Sipahimalani, joint head of portfolio strategy and risk group at Temasek, said during the news conference.

Many of the internet businesses in the region are still in their early stages, but Sipahimalani revealed that Vertex, Temasek's venture capital arm, has invested in "over half a dozen such opportunities just in the last nine months." Some of them may become targets for Temasek in the next couple of years, he added.

GIC and Temasek are under pressure to seek fresh earnings to fill state coffers. With a birthrate of just 1.16, one of the lowest in the world, Singapore is preparing for a rapidly aging population by boosting spending on medical care. It has also spent considerably on infrastructure development over the past two decades.

GIC warned that long-term returns in the coming years would remain "significantly lower" than in the past after reporting its worst performance since the global financial crisis in annual report issued on July 13. GIC said that its 20-year annualized real rate of return, its main performance indicator available to the public, for the year ended March fell to 3.4%. Neither state funds reveals detailed financial results.

In recent years, the Singapore government has increased reliance on contributions from Temasek and GIC for its revenue. For the fiscal year that started in April, the government estimates 15.9 billion Singapore dollars ($11.6 billion) in investment return contribution from government entities, including Temasek and GIC. The amount represents 18% of budgeted revenue for the year, an increase from 12% five years ago. Health spending for the current year is budgeted at SG$10.2 billion, close to double the amount from the fiscal year that started in April 2013. 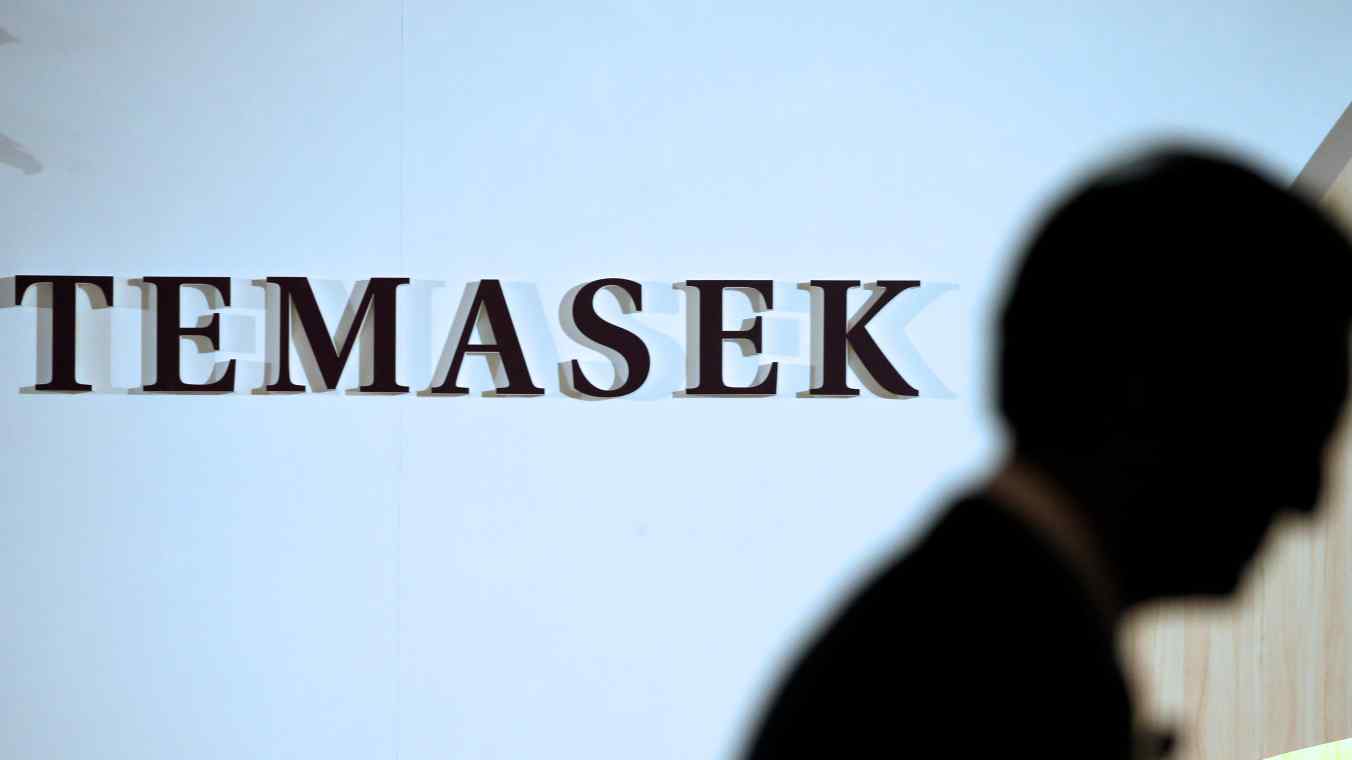 Company in focus: Singtel stakes its future on going way beyond telecommunications

According to the annual report for the fiscal year ended in March, Temasek's investment into unlisted companies represented about $120 billion, 39% of its total portfolio of $308 billion. That volume has more than doubled from the 2013 figure. Temasek is looking to "more private market opportunities," Sipahimalani said.

Private equity investments represented 11% of GIC's portfolio in the same period, up from 9%. GIC has stated that its assets under management are "well over $100 billion," although London-based Sovereign Wealth Centre estimates them at $398 billion.

Temasek said technology, nonbank financial services, life sciences and agribusiness technologies made up 26% of its portfolio at the end of March, up from 5% in 2011. The annualized return for these companies is more than twice its total portfolio, it said.

Some of the early-stage investments by Temasek and GIC are done indirectly, through venture capital subsidiaries or by investing in external venture capital funds. As in the case of CashShield, Temasek first invested in it through Heliconia Capital Management, a wholly owned venture capital fund dedicated to Singaporean companies, before Temasek itself made an investment in the following round. 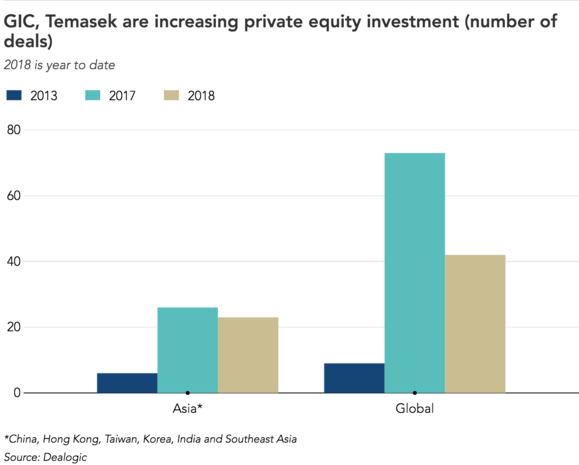 With global equities now trading at high levels, and against a backdrop of rising trade tensions worldwide, Temasek and GIC are leaning on private equity investments "where we see true value," Sipahimalani said.

Other fund managers agree. "The private equity market won't be immune to changes in the macro environment, but the impact would be less significant compared with the public market," said Mingchen Xia, managing director at Hamilton Lane, an alternative investment management firm with $449 billion in assets.

There is also a strategic reason for Singapore to enlarge its exposure to private companies -- to transform the country's state-linked companies. Png said investments in early-stage businesses offer "very important learning" for Temasek and its portfolio companies in traditional industries, such as the city-state's largest lender DBS Group Holdings, property developer CapitaLand, Singapore Telecommunications and Singapore Airlines.

These companies increasingly are threatened by disruptive forces. Temasek's exposure to startups will give it know-how and expertise to help these companies change, said Png.

However, high valuation is one of the key challenges. GIC said it would remain "cautious and selective" given that the valuations of technology companies have gone up substantially.

Other investors share the same view. Hamilton Lane's Xia said "it's key to remain disciplined and be selective."

Abrar Mir, co-founder and managing partner of Quadria Capital, a private equity fund focusing on Asian health care, said that while he was bullish about strong economic fundamentals in Asia, "we need to be cautious about ... whether the long-term valuations in which we are invested are sustainable."

Prominent U.S. investor Jim Rogers, who lives in Singapore, warned of "excesses" in the private equity space worldwide and that many startups face failure. "If you can find three Alibabas, it could cover 300 failures. The problem is, you have to find three Alibabas," he said.

Temasek was founded in 1974 under Singapore's Ministry of Finance as a holding company of state-owned businesses, but evolved to become a global investment company. GIC was established in 1981 to manage Singapore's foreign reserves by investing in assets externally. Prime Minister Lee Hsien Loong is GIC chairman. His wife, Ho Ching, is Temasek's CEO.