The wealth of some of China's largest producers of pig feed and pork has soared as prices of the meat have climbed amid a disease epidemic.   © Reuters
CK TAN, Nikkei staff writerOctober 10, 2019 17:00 JST | China
CopyCopied

SHANGHAI -- China's African swine fever epidemic has devastated the country's pig herds, but the boost it has given to pork prices has shaken up the ranks of the nation's wealthy just as much as string of successful initial public offerings in Hong Kong.

Pig farmer Qin Yinglin of Muyuan Foods and his wife Qian Ying soared to No. 15 from No. 70 on the annual ranking of the country's wealthiest people, compiled by Shanghai-based Hurun Research Institute, as their assessed net worth nearly tripled to $14 billion. Qin started his herd in 1992 and Muyuan now is the largest pig farm operator in the country.

Liu Yonghao, whose agribusiness conglomerate New Hope Group has been expanding further into pig raising, jumped to No. 26 from No. 62 as his wealth more than doubled to $11.5 billion. Industry publication AgronoMag had ranked him as the second-wealthiest farmer in the world in 2017. Ranked first then was his brother Liu Yongxing of rival East Hope Group. He slipped a place on the new Hurun list to No. 30 with $10 billion in assets.

Despite the rise in their fortunes, overall the ranks of those in China with a net worth of least 2 billion yuan ($280 million) declined for the second consecutive year, slipping 4% to 1,819. At the same time, though, the average wealth of those still on the list increased.

Jack Ma, who retired last month as chairman of Alibaba Group Holding, retained the top spot with a $39 billion net worth. 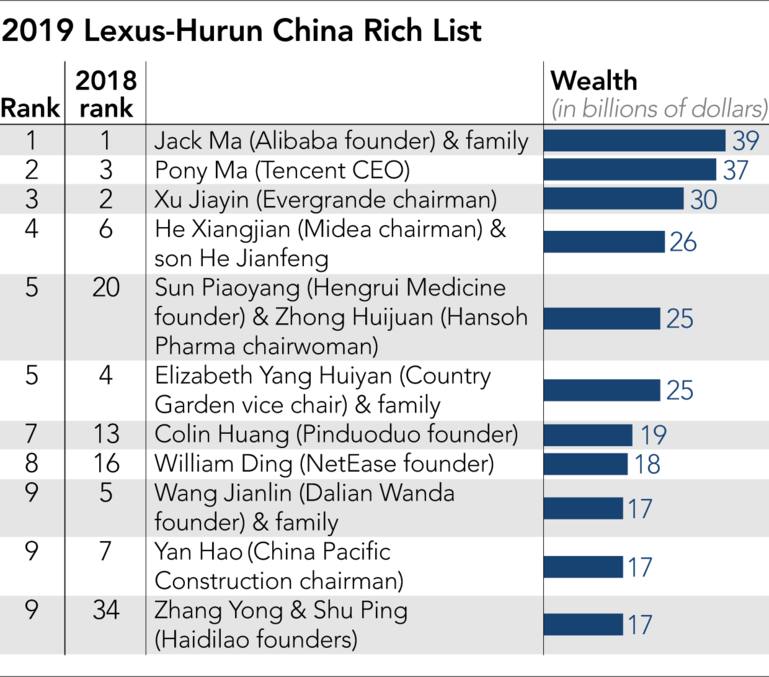 Rupert Hoogewerf, Hurun's chairman and chief researcher, noted that 40% of those on the 2017 rich list have since fallen off, including 266 this time. This marked the first time the list has shortened in two consecutive years since it was launched in 1998. However, extreme wealth also seems to be concentrating, as the average wealth of those on the list rose 10% to a record $1.4 billion.

"Companies with strong business models, good teams and that can maintain a spirit of entrepreneurship are pushing forward relentlessly," he said.

This year saw 192 new names make the Hurun list, led by Li Yongxin and his mother Lu Zhongfang of online educational training provider Offcn Education Technology, which acquired a backdoor listing this year on the Shenzhen Stock Exchange. That gave the pair a net worth of $8.4 billion.

Stock exchange listings continued to power others up the list. The wealth of husband and wife pharmaceutical executives Sun Piaoyang and Zhong Huijuan more than doubled to $25 billion, taking them up to No. 5, as Zhong's Jiangsu Hansoh Pharmaceutical listed in Hong Kong. (Sun's Hengrui Medicine was already listed in Shanghai.)

Another husband and wife team, Zhang Yong and Shu Ping, jumped in at No. 10 as their wealth doubled to $17 billion with the Hong Kong IPO of their hot pot restaurant chain Haidilao International Holding, which has been expanding overseas.

The founders of two China's most valuable unlisted companies also climbed up the list. Huawei Technologies Chief Executive Ren Zhengfei saw his net worth rise 24% to $3 billion even as his company's revenues have come under heavy pressure from U.S. sanctions. The wealth of Zhang Yiming of ByteDance, operator of the TikTok video streaming app, climbed 46% to $13.5 billion.

Stock market falls were unkind to a number of other technology company founders. Baidu Chairman Robin Li and Xiaomi Chief Executive Lei Jun tumbled from the top 10 to No. 34 and No. 29 respectively as their assessed wealth each fell by more than 30%.

Similarly, William Li Bin of electric carmaker Nio tumbled far down Hurun's list as his net worth was cut in half. The company has been laying off staff as it struggles to realize its production goals.