TOKYO -- People living in Japan, both locals and foreigners, are making tidy little profits by purchasing domestically produced goods then reselling them online to eager Chinese consumers on the mainland.

Called "social buyers," this growing army of enterprising entrepreneurs is on the march, cashing in on China's lukewarm appeal for its own products.

Helping drive this trend is the proliferation of Chinese online shopping websites and smartphone apps. Over 450,000 people living in Japan have registered with China's consumer-to-consumer, or C2C, site Weidian over the past four years, using the platform to sell cosmetics, health foods and other hard-to-get items directly to Chinese.

Weidian now hosts 70 million social buyers and is a popular sales point. It is also very convenient: All sales and purchases are completed with WeChat, Tencent Holdings' mobile chat app used by 900 million people. Sales of goods via Weidian are expected to hit about $7 billion 2018, more than double that of last year.

In China, consumer confidence in domestic products is weak and counterfeit brand-name goods flood the market to the dismay of shoppers looking for genuine items.

The country has no shortage of online shopping sites where individuals can open stores -- such as Taobao, Alibaba Group Holding's shopping site -- but they lack the personal feel of Weidian and other C2C sites, and transactions can be a cumbersome.

"We cannot easily verify sellers on Taobao and other shopping sites," said one Chinese woman. "Therefore, we have no choice but to be really careful when buying."

Social buyer Chang Lin in Japan said, "Many Chinese have a lot of trust in Japanese cosmetics and food products."

Formerly a student at a Japanese university, Chang now sells goods worth between 2 million and 3 million yen ($18,000 and $27,000) monthly. The 23-year-old scours cosmetic stores in rural areas for products while building relationships with store managers.

According to the Beijing-based company that operates Weidian, social buyers in Japan can turn monthly profits of about 200,000 to 300,000 yen. Some particularly active buyers are racking up more than 100 million yen in annual sales.

One social buyer who mostly handles cosmetics has a 3,000-strong customer base, laboriously cultivated by trying all goods personally and offering consultations.

The trend has been noticed by a number of Japanese companies, who see social buyers as a ready-made distribution network for their products in China. 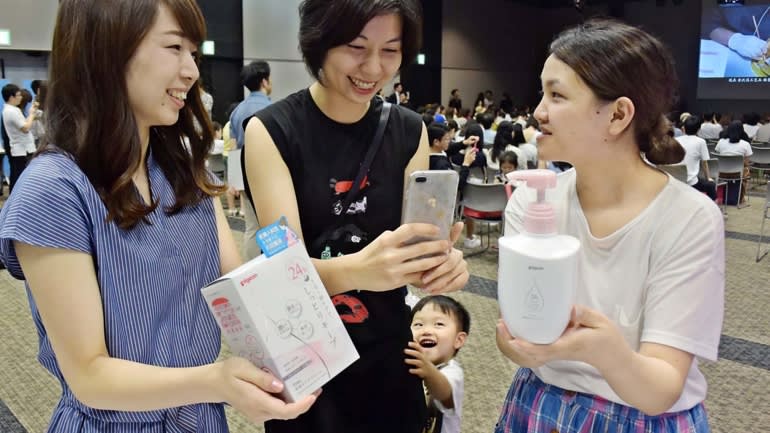 A joint event by TrendExpress and Weidian gave social buyers a hands-on-opportunity to sample new products in which Chinese might be interested.

During the event, the companies pitched new products to 200 social buyers and distributed samples.

One Pigeon official was surprised at the discerning attitudes of attendees, who were keen to know details of the products, such as their usage and efficacy.

Japanese companies do not pay social buyers for marketing, but then social buyers do not simply flog products they cannot trust, as their success depends on maintaining a high level of customer satisfaction.

The social buyer trend is looking like a win for all. Companies can develop a consumer base in China without having to set up shop there, social buyers can continue to ply their profitable trade, and Chinese can be assured of a steady stream of the foreign products they crave.