Aisles are barely wide enough for a single person at VinMart's Le Duan outlet, but the store makes up for it with an effective layout.
ATSUSHI TOMIYAMA and YUICHI NITTA, Nikkei staff writersOctober 25, 2017 11:30 JST | Japan
CopyCopied

HANOI/YANGON -- A kind of retail revolution is taking place in Southeast Asia's convenience-store sector, as stores find a competitive edge by adjusting product offerings based on time of day, and offer a level of service on par with stores in Japan and other advanced economies. Such efforts are helping bring prosperity to the region's convenience-store business.

Take the VinMart Plus chain of stores operated by Vietnamese property developer Vingroup. Since 2016, when the company began opening stores in earnest, the number of VinMart Plus stores has increased rapidly, topping 1,000 as of September. That is well ahead of the second-largest convenience store chain, Japan's FamilyMart, which expects to have 150 stores by the end of this year.

Many of the stores in Hanoi and Ho Chi Minh City are tiny and narrow, occupying less than 100 sq. meters.

A VinMart Plus outlet on the Le Duan street in Hanoi is a good example. It was opened after the renovation of a rental photography studio. The store is only 3-4m wide, a space unlikely to be used for a convenience store in Japan. The narrowest aisle is just 90cm, much less than aisles in stores in Japan and other advanced economies.

Although customers cannot even pass one another in this cramped space, they do not seem to mind, as most stores in Vietnam are small.

The staircase and the second floor have been converted into a warehouse. The store is, in principle, managed by two employees, with 10 or more security cameras to monitor customers.

The most distinctive feature of VinMart Plus stores, including the one on Le Duan street, is the product display, which changes according to the time of day. Since August, VinMart Plus stores have been switching merchandise on island displays from vegetables and processed foods to ready-to-eat foods after 4 p.m., which the company calls the "golden time for housewives." 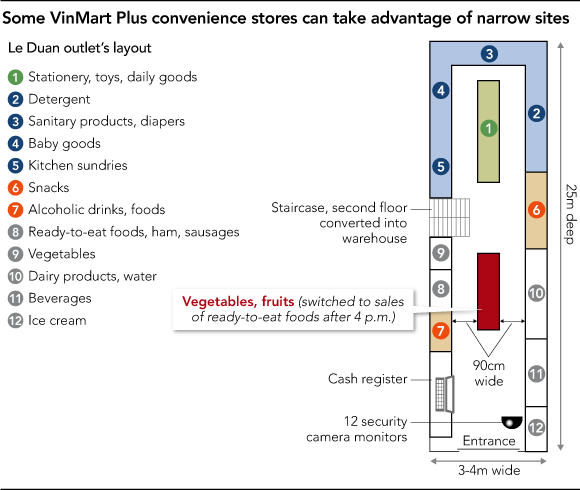 After 4 p.m., the section highlights simple fare, such as fried spring rolls, stir-fried bitter gourd and other dishes that are finding popularity among housewives in Vietnam.

At the same time, the stores give 10-20% discounts on some products. These methods are proving successful, luring customers from traditional markets and supermarkets into the VinMart Plus store.

"The number of housewives who regularly use our store is increasing," said a store official.

Daily sales at the Le Duan outlet come to about 16 million dong ($700). The top-selling categories are alcoholic drinks and beverages, snacks and ready-to-eat food, as well as vegetables.

Delivery services for homes within a 700m radius of the company's 22 outlets in Hanoi began on Oct. 5, with the number of customers rising sharply.

Vingroup plans to increase the number of Vinmart Plus outlets up to 3,000 within the next 2 years.

This City Express convenience store in Yangon is clean and well-lit, and offers a variety of ready-to-eat food and a level of service on par with its counterparts in Japan and other advanced economies.

The 70 or so City Express convenience stores operated by Myanmar's City Mart Holding are eclipsing local rivals with a high level of service.

All City Express stores are open 24 hours a day in Myanmar, where shopping at night is not common. The stores are clean and well-lit, with security cameras keeping an eye out for criminal activity.

The product lineup is nearly as extensive as in convenience stores in other countries, and includes fried food and steamed buns.

City Mart's Managing Director Win Win Tint said the latest services are being offered to preempt foreign rivals that will enter the market in future. By taking the initiative in introducing high-level services in a country with a shaky distribution system, the company seeks to spur its business growth and gain an edge over foreign rivals. City Mart has the advantage of its own supermarkets and a delivery company within its group. It is also looking to make inroads into the online retail sector by working with convenience stores on in-store product pickups.

The number of cities with per-capita gross domestic product exceeding $3,000 is increasing in Southeast Asia, a threshold for a convenience store boom.

While convenience stores are spreading throughout the region, Japanese chains, perceived as leaders in store design and service, face an uphill battle. Their problems include devising merchandise policies tailored to local preferences, establishing distribution networks and dealing with local restrictions on store openings.

At the end of June, the operator of 7-Eleven's Indonesia stores closed all of its 116 outlets. Meanwhile, local rivals Indomaret and Alfamart have opened 10,000 stores each.

While local players have gained repeat customers by operating small stores near residential areas, 7-Eleven stores that obtained restaurant licences were oversized and encumbered by eat-in spaces and restrictions on alcohol consumption in the Muslim-majority country.

In Vietnam's Ho Chi Minh City, the number of FamilyMart and Ministop stores is approaching 100, but no Japanese convenience stores have opened in Hanoi, where restrictions on opening such stores are still in force.

A senior official with a Japanese chain, who was once posted in Vietnam, was initially cynical about Vingroup's approach to opening stores on such tiny properties. The official said the VinMart Plus stores were "not deemed convenience stores," and assumed the business would run "a huge deficit."

But that assessment has since changed. The official now sees a serious threat from the VinMart Plus competition.