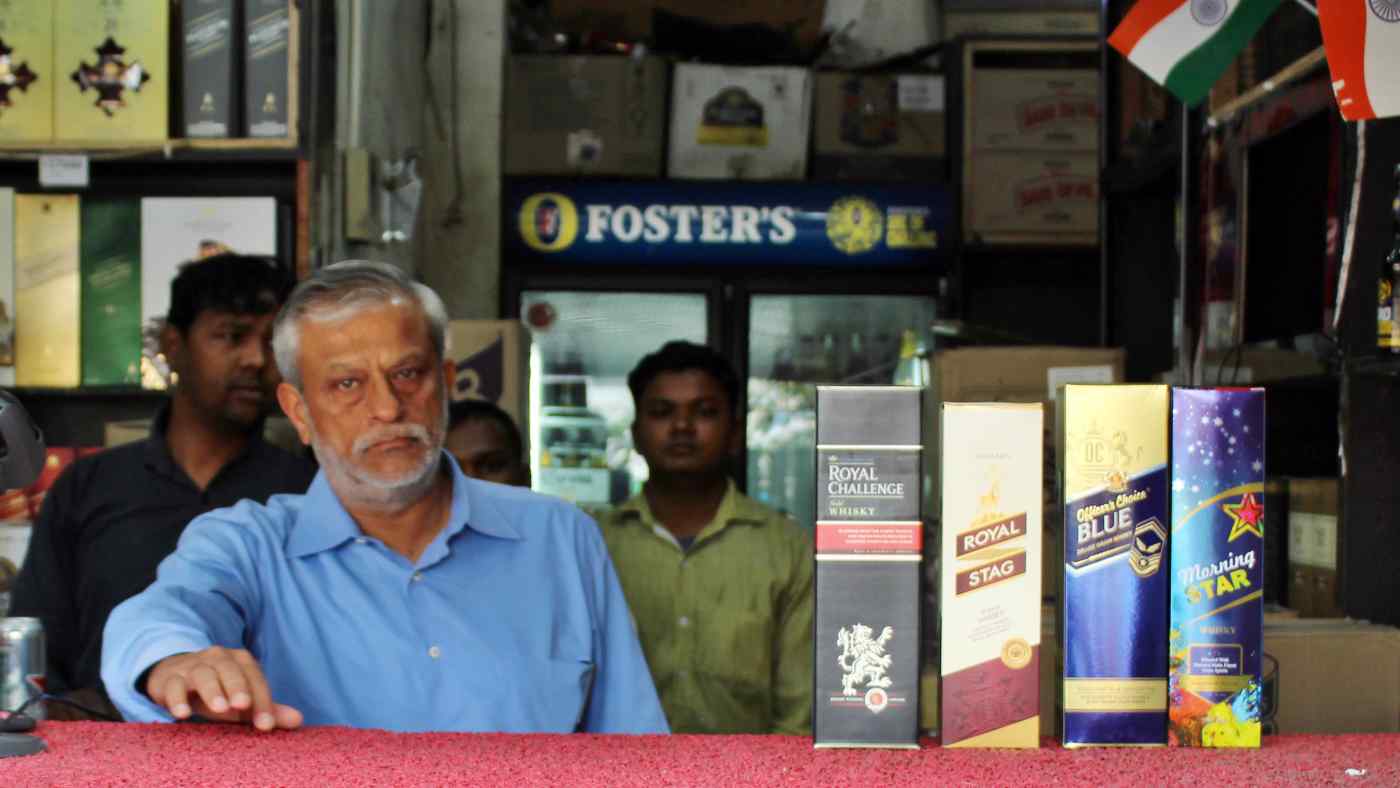 NEW DELHI -- The Indian whiskey industry's glass is half empty.

Rising incomes are boosting sales of whiskey in India, and 12 million people -- almost the size of Belgium's population -- reach drinking age every year. But the national goods and services tax introduced last year has left a bitter aftertaste for distillers.

Alcohol for human consumption is not subject to the tax, but inputs -- the ingredients and materials used to produce and bottle whiskey -- are. That would not necessarily be a problem if manufacturers could pass on the rising costs to consumers. But that is not possible in India, because states must approve price changes and they take a long time, sometimes years, to reach such decisions. The country's 29 states have the power to tax alcohol as they choose.

Whiskey makers say they will have to make cost efficiencies, and their margins are under pressure. The industry also plans to push further into the premium sector, already the fastest-growing part of the market. That is because the costs for most producers are the same, while a premium-priced product is better able to absorb rising prices stemming from the new tax.

The tax has raised input costs by 15% to 20%, according to industry sources. In the Indian spirits industry, whiskey accounts for nearly 62% of revenues, but almost 83% of profits, so the entire industry will be affected by the rising costs.

Glass is taxed at 18% under the GST, up from 14.5% previously. Molasses for beverages -- the key ingredient in Indian whiskey -- is now taxed at 28%, against a previous rate, which varied from state to state, of about 12%.

Other inputs, including chemicals and coloring agents, face GST rates of 5% to 18%, compared with 3% to 10% previously. Rising oil prices may also prompt some farmers to sell molasses to the country's ethanol producers, pushing up input prices further.

"We will focus on some price absorption, and also look at how states work out the GST effect on the industry, and specifically concentrate on the premium market offerings as our growth strategy going forward," said Pranav Chawla, director of Whiskin Spirits, a manufacturer of brands such as Dignity and Whiskin Craft.

Whiskeys priced below 400 rupees ($6.15) per bottle would be hardest hit, he said. "The reason is that everything from glass bottles to packaging to advertising and freight is under the new single tax, while the whiskey industry itself is not. This will hurt the margins of all players."

Deepak Roy, executive vice chairman and chief executive of Allied Blenders & Distillers, said, "The industry will need to walk the line between price increases [and] cost efficiencies, and will also have to undertake some price absorption." Allied's flagship Officer's Choice brand is India's biggest-selling whiskey. 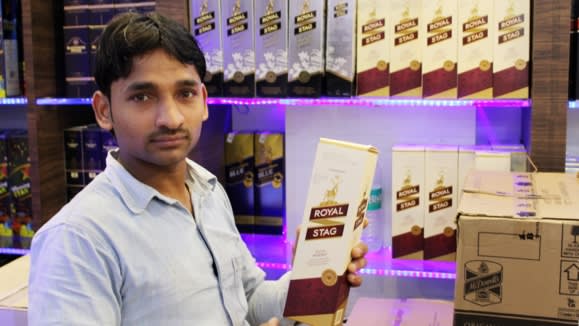 A liquor store in Delhi: State governments can tax alcohol as they see fit, which greatly affects the price. (Photo by Ninad D. Sheth)

United Breweries Managing Director Shekhar Ramamurthy told the Economic Times newspaper in November that the GST may have cut 0.5 percentage points off the company's profit margin, against an original "worst case scenario" of a 2 percentage point impact.

The tax pressures come at a period of otherwise strong growth for the industry. Whiskey sales in India grew 30.7% in value terms to 1.24 trillion rupees ($19.1 billion) from 2011 to 2016, according to GlobalData.

"India is a whiskey sales growth story, given reducing cultural inhibitions about consumption of alcohol, along with other factors, such as rising disposable income and increasing urban population," said Apoorva Nema, consumer markets analyst at GlobalData.

"Additionally, the increasing trend of out-of-home consumption and social gatherings among the young population is also fueling growth in the category," Nema said. "However, trade restrictions in many states and the impact of the GST are inhibiting factors for the growth of this segment."

United Spirits CEO Anand Kripalu said in an investor presentation last year that the premium segment was likely to contribute 70% of the Indian spirits industry's profits by 2021. Premium whiskey's current contribution to profits is estimated at about 45%.

United Spirits, India's largest spirits company and part of United Breweries, recently moved to franchise its cheaper brands, such as Hayward's, rather than produce them in-house. Franchisees will produce and market the brands, paying a licensing fee to the company.

Amrut Distilleries in Bangalore leads the premium offerings. Its single malt was declared one of the best three whiskeys in the world by Jim Murray's Whisky Bible, an annual industry publication, in 2010. Amrut retails Indian single malts at more than 4,500 rupees a bottle -- an exceptionally high price for an Indian whiskey.

But moving upmarket may prove a struggle for some companies.

"State taxes, inability to pass on price increases [and] changing consumer preference mean that the Indian whiskey industry will have to innovate up the value chain," said Sanjay Jain, liquor industry analyst at Taj Capital Partners, an investment firm.

"This is easier said than done, as premium whiskeys need a far greater legacy behind them and marketing spends have to be 15% of the costs," Jain said. "GST also means that any greenfield distillery will be significantly more expensive to set up."

In addition to the goods and services tax, the industry is facing other problems. Some states have recently imposed prohibition, and liquor sales along highways have been banned.

The Supreme Court in 2017 banned alcohol vendors along highways to cut down on drunken driving. That hit the business hard, although the court allowed alcohol to be served in restaurants along highways passing through cities. Bihar, in northern India, the second-most populous state, imposed an alcohol ban in 2016.

The same year, Kerala, a southern state popular with tourists, restricted alcohol sales to hotels rated three-star and above. Political parties, buoyed by the belief that prohibition can reduce crime and violence against women, are pushing for bans in other states, too.

The Indian whiskey industry wants to be included within the GST system, but it could be waiting longer than some well-aged whiskeys spend in the barrel.