TOKYO -- Competition surrounding taxi apps in Japan is intensifying, despite the country being one of the world's only developed markets where ride sharing remains illegal.

Entering the taxi operator market is virtually impossible, but this has not stopped major technology companies from investing to secure a footprint in a highly regulated industry.

Tokyo-based JapanTaxi’s Zenkoku Taxi app connects some 60,000 taxis, or about a quarter of the total in the country. With five million downloads, it is the country’s largest ride-hailing app.

JapanTaxi aims to become a transportation platform that solves transport problems in Japan, the companies said in a news release. The app will use Docomo’s artificial intelligence to improve its prediction technology, as well as integrate the telecom’s smartphone payment service.

Docomo’s investment illustrates its belief in the prospects of the taxi industry, which has been hit hard by ride-hailing services like Uber in other parts of the world. Under Japanese law, private drivers are banned from transporting paying passengers. That has left Japan, which is experiencing a surge in foreign tourists ahead of the 2020 Tokyo Olympics, one of the few major economies in the world where major ride-hailing services like Uber are not available. Uber has dealt with the issue by partnering with taxi companies. But it has struggled to navigate Japan’s fragmented cab industry, where small players operate a handful of taxis, giving JapanTaxi the upper hand.

Other technology companies have also had no choice but to join forces with taxi players. SoftBank Group recently announced a joint venture with Chinese ride-sharing giant Didi Chuxing to launch a taxi hailing app in Japan later this year.

In announcing the move, SoftBank Group CEO Masayoshi Son called the Japanese government "stupid for not allowing ride-sharing,” and warned that the country was now "falling far behind the global front runners -- the U.S. and China." SoftBank is a top shareholder in Uber, Didi and their Southeast Asian peer Grab.

Docomo holds an estimated 5% of JapanTaxi’s shares after the investment. The company has been investing in areas outside its core telecommunications business to build new sources of revenue.

Other backers of JapanTaxi include Toyota Motor and a fund managed by asset management company SPARX Group. 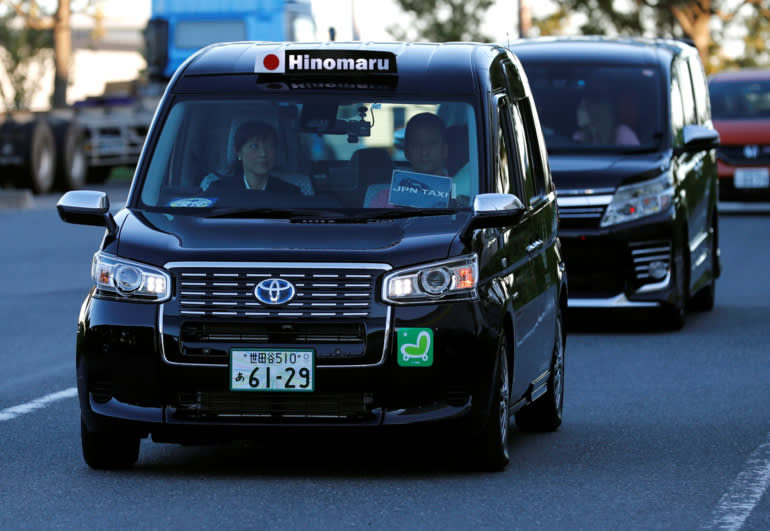