Tech after Trump: What a Biden win will mean for Asia 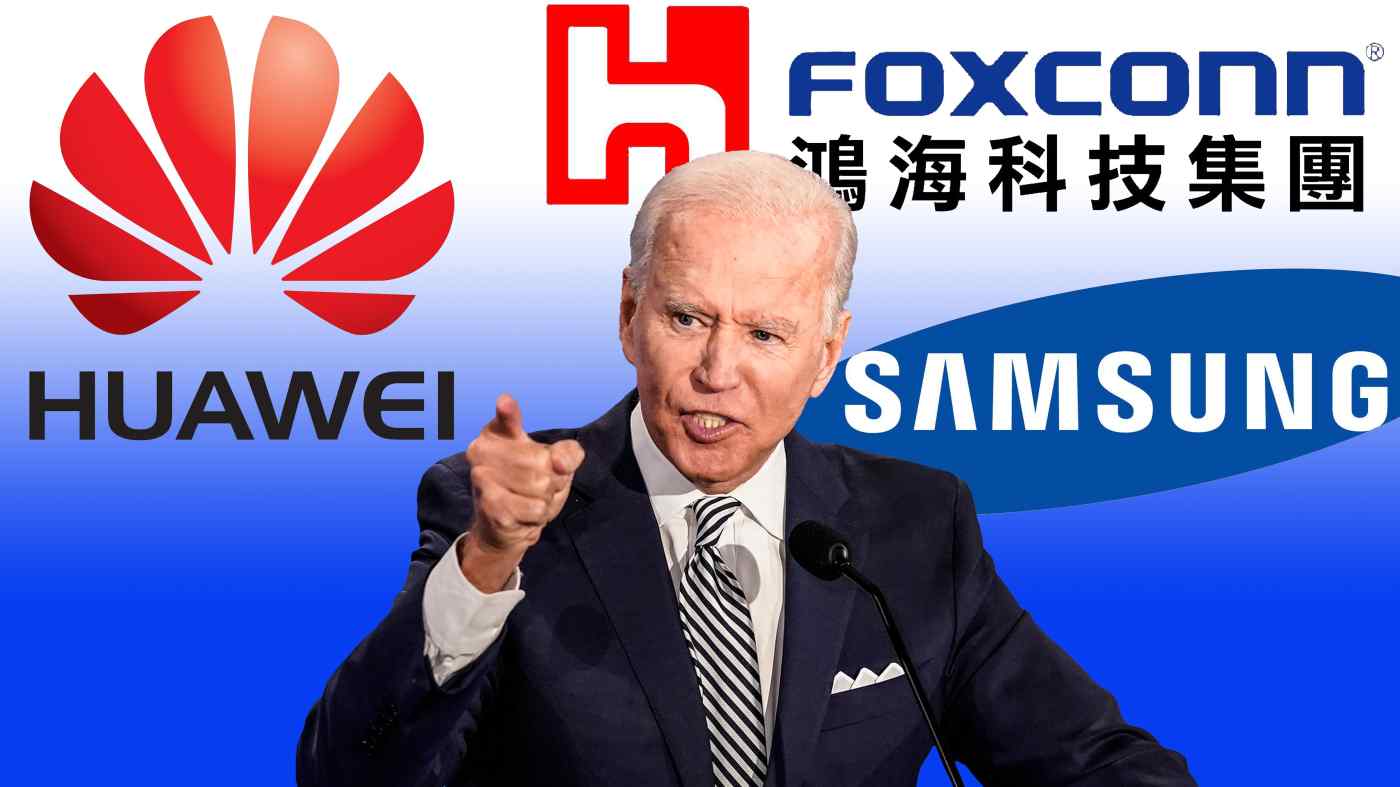 Silicon Valley was a big backer of President-elect Joe Biden's campaign in hopes he would undo some of the turmoil of the last four years.  (Source photos by AP)
YIFAN YU, Nikkei staff writerNovember 9, 2020 10:51 JST | North America
CopyCopied

PALO ALTO, U.S./TAIPEI/SEOUL -- Joe Biden is set to move into the White House on Jan. 20, and the global tech industry is, by and large, breathing a sigh of relief. Hopes are high that the Democrat -- who was hailed as the winner of the tightly contested U.S. presidential election at the weekend -- will oversee an easing of tensions with China and bring some much-needed stability back to business.

But there are also questions hanging over Biden, including how he intends to rein in Big Tech in America, and how much scope he will have to implement his policies if his party fails to gain control of the Senate.

One of the greatest hopes the tech world has for Biden is that he will reverse -- or at least slow -- the decoupling of U.S. and Chinese supply chains.

Since the U.S. added Huawei Technologies to a trade blacklist last year, American suppliers to the Chinese tech giant have lost billions of dollars in revenue. This year, the Trump administration's broader crackdown on Chinese tech companies including TikTok has threatened to take an even bigger toll on America's tech sector, as Silicon Valley fears that worsening tensions would draw retaliation from Beijing and create additional difficulties for their cross-border businesses.

Industry participants and experts say Biden is less likely to push for such a decoupling and will bring a wider range of strategies to his dealings with Beijing.

"I think Biden will continue to be tough on China, but he will be a little more strategic in his thinking and he is going to look more strategically at what kind of relationship we want with China," said Orit Frenkel, a former trade negotiator with the Office of the U.S. Trade Representative and now executive director at Washington-based advocacy group American Leadership Initiative. Trump's approach to China, including increasing tariffs, has caused collateral damage to U.S. companies, Frenkel added.

Yet even under a President Biden, tech competition between the two super powers is set to intensify further, as the U.S. will continue to see China's growing technological prowess and America's dependence on the supply chain there as national security concerns.

"Biden would like to bring more supply chain back to the United States. It's a way to help rebuild the American economy. But he's not going to be as draconian as Trump has been," said Darrell West, vice president and director of governance studies at Brookings Institution, a Washington-based think tank.

What will likely not change is the great supply chain shift out of China, sparked by the Trump administration's tariff increases and crackdowns on companies like Huawei.

Apple, HP, Dell and Google have all asked their suppliers to help prepare "out of China" production options, while many key electronics companies have expanded their manufacturing footprints in many Southeast Asian nations, Taiwan and India.

Simon Lin, chairman of Wistron, a smaller iPhone assembler and supplier to Acer, HP and Dell, believes this shift will outlast the trade war that sparked it. "This massive trend toward diversification will not change for the longer term," Lin said.

Apple's plans to shift more production capacity in India and Vietnam will also continue regardless of who sits in the Oval office, people familiar with the U.S. company's plans said.

"Diversifying the risks is the main goal for the long term. [Apple's] Indian project will continue. It won't be changed because of the U.S. election results," a supply chain source told Nikkei Asia.

Closer to home, Biden could roll back some of the recent immigration policies that have made it more difficult for America's big tech companies to hire and keep foreign talent.

Of particular importance is the H-1B work visa program used primarily by Silicon Valley tech companies to bring in high-skilled immigrants. The majority of H-1B visas are awarded to Chinese and Indian nationals but in June the U.S. suspended the issuance of these and other work visas. This was followed by major rule changes announced last month, raising the requirements for H-1B applicants.

The Trump administration's unfriendly stance toward immigration has driven a growing number of tech workers to leave the country, willingly or unwillingly.

"We are not living in the 1920s anymore. It's a global economy, and we have to be competitive," said Diane Hernandez, an immigration attorney at law firm Hall Estill.

Biden will "not make it more difficult" for tech companies to hire foreign talent, Hernandez said, as the priority will be on helping U.S. tech companies remain globally competitive. However, she also expects his administration will make some changes to employment-based immigration policies, including the H-1B program, in the next four years.

"Biden tends to be a little more on the conservative or [moderate] side when it comes to employment-based immigration issues," Hernandez added.

Investment plans up for review?

A change of president also has major implications for the individual companies caught up in Trump's twin goals of curbing China's tech rise and rebooting American manufacturing.

However, Foxconn's initial promise to invest $10 billion in Wisconsin to build a massive display plant and TV assembly line has been repeatedly scaled back, a fact that Trump's Democratic rivals were quick to seize on. Bringing manufacturing jobs back to the U.S. was one of the president's major campaign pledges, and failure to deliver on it did not help him at the polls: Trump ended up losing the state by a slim margin.

Meanwhile TSMC announced in May its intention to build a $12 billion advanced chip facility in Arizona, another battleground state Trump narrowly lost.

Just two weeks before voting began in the U.S., Foxconn founder and former chairman Terry Gou released a statement pledging to continue the company's investment in Wisconsin no matter which candidate prevailed, "as long as policymakers at the federal, state, and local levels remain committed to Foxconn."

Biden's win, however, raises questions over whether the investment terms will be renegotiated for both of these projects.

Like Foxconn and TSMC, Samsung Electronics also invested in the U.S. during Trump's administration, in its case in a politically favorable home appliance plant in South Carolina. The investment was announced just days before Samsung's de facto chief met the president in 2017.

Now, the South Korean company may have reason to welcome a President Biden -- despite being one of the early winners of Trump's trade war. The smartphone and chip titan has enjoyed robust sales while its Chinese rival Huawei struggled under Washington's crackdown, but its management has not appreciated the uncertainty of the past four years.

A Samsung executive said Biden's support for free trade and multilateralism should help the company grow, as more than 80% of its revenue comes from overseas markets.

"We have grown through globalization in trade. Many of our businesses rely on global value chains," said the executive, who asked not to be named.

In terms of domestic tech policy, Biden has pledged to invest heavily in new technologies under his "Buy American" economic agenda. The plan includes $300 billion for new technologies ranging from electric vehicles and lightweight materials to 5G and artificial intelligence -- areas where China is rapidly gaining cachet.

"Under a Biden administration there would be much more support for the technology sectors, I believe," said Rob Atkinson, president of the Information Technology and Innovation Foundation, a Washington-based public policy think tank.

"We will see significant funding through the National Science Foundation or other federal agencies to support developments like AI and quantum computing and smart manufacturing. There'd be more money towards rolling out 5G," said Atkinson.

However, Biden and his vice president, Kamala Harris, have also been open critics of the tech sector and called for more regulations, especially for social media giants like Facebook.

Biden has also called for a minimum federal income tax aimed at companies like Amazon.

"Biden has concerns about competition policy cybersecurity, privacy and several other aspects. So I think there would be more government oversight of the tech sector," said West at Brookings.