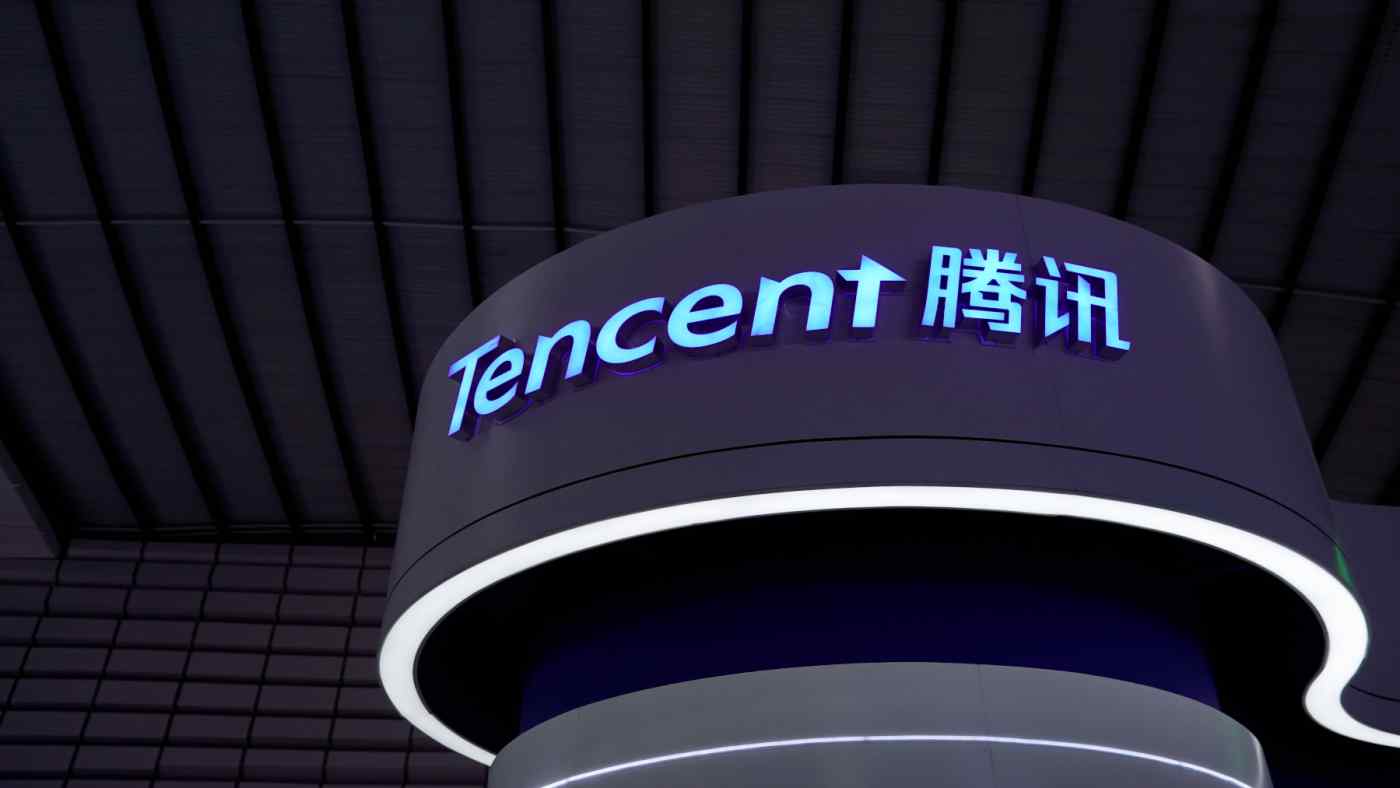 Out of Asia's 19 companies with a market cap exceeding $100 billion, Tencent was the only company that maintained year-end value in the first quarter.   © Reuters
KENTARO IWAMOTO, Nikkei staff writerApril 1, 2020 19:26 JST | China
CopyCopied

But there were some winners, notably in China. Online service providers such as Tencent Holdings and producers of medical products saw demand skyrocket amid the pandemic.

"The first quarter ended on a much different and difficult footing versus what most investors and analysts had anticipated at the beginning of the year," Nomura's equity analyst Chetan Seth told the Nikkei Asian Review. "COVID-19 turned out to be 'leftmost tail risk' for markets, which no one could have possibly forecast."

But Seth noted that China's equity markets managed to outperform in a downturn, "particularly some areas within the tech space such as software, which appears to be benefiting amid the COVID-19 outbreak as people stay home and need to use more cloud and software-related services."

According to QUICK-FactSet, 63 of 502 companies with a market cap of $10 billion or more at the end of December increased in value during the three months through March, while the remaining 439 slid.

Out of Asia's 19 companies with a market cap exceeding $100 billion, Tencent was the only company that maintained year-end value. The online gaming and internet service provider, whose value rose 0.3%, recorded "resilient growth amid the COVID-19 pandemic," Singapore's DBS Group Holdings said in a note on March 19, reporting that time spent online has risen during the outbreak.

Among 502 companies, Beijing Kingsoft Office Software was a winner, as market cap surged 34.2%. Monthly active users of its WPS Office software ballooned to 239 million on March 2, compared with 67 million at the end of 2019. "This trend also [ingrains] user habits and boosts market demand, expanding the potential growth in WPS Office's personal and enterprises subscription services in the future," the company said in a March 24 statement.

Likewise, investors saw demand for e-learning jump, sending the market cap of Offcn Education Technology, a vocational education operator, up 23%. The Shenzhen-listed company offers both online and offline courses through 1,000 locations nationwide, and has been rolling out online classes on soaring demand from locked-down students, according to local reports. 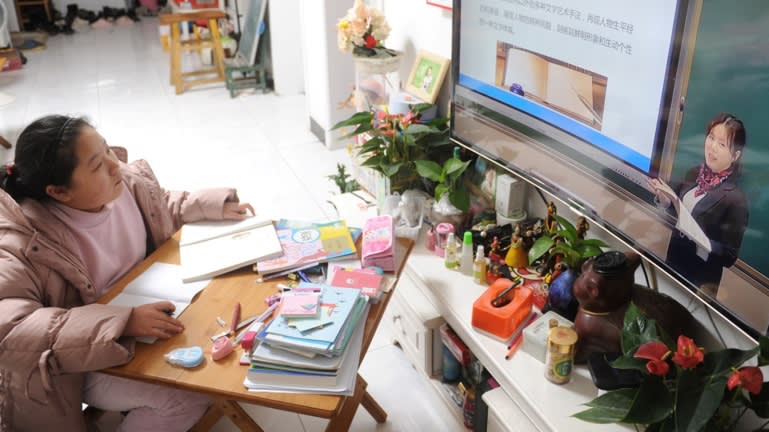 A student attends an online class at home in Anhui Province, China. The coronavirus pandemic has increased demand for medical products and online services.   © Reuters

In Japan, hygiene products maker Unicharm rose 9.4%, largely on demand for masks and its huge exposure to the Chinese market. In Southeast Asia, Malaysian medical glove producer Top Glove gained about 40% during the quarter on a market cap of under $10 billion.

One big surprise was Chinese pork producers. Hog sales, which had already swooned last year due to the African swine flu, came under further pressure amid dwindling pig stocks. But the massive shortage has sent pork prices soaring, pushing up revenue and shares in the first quarter. 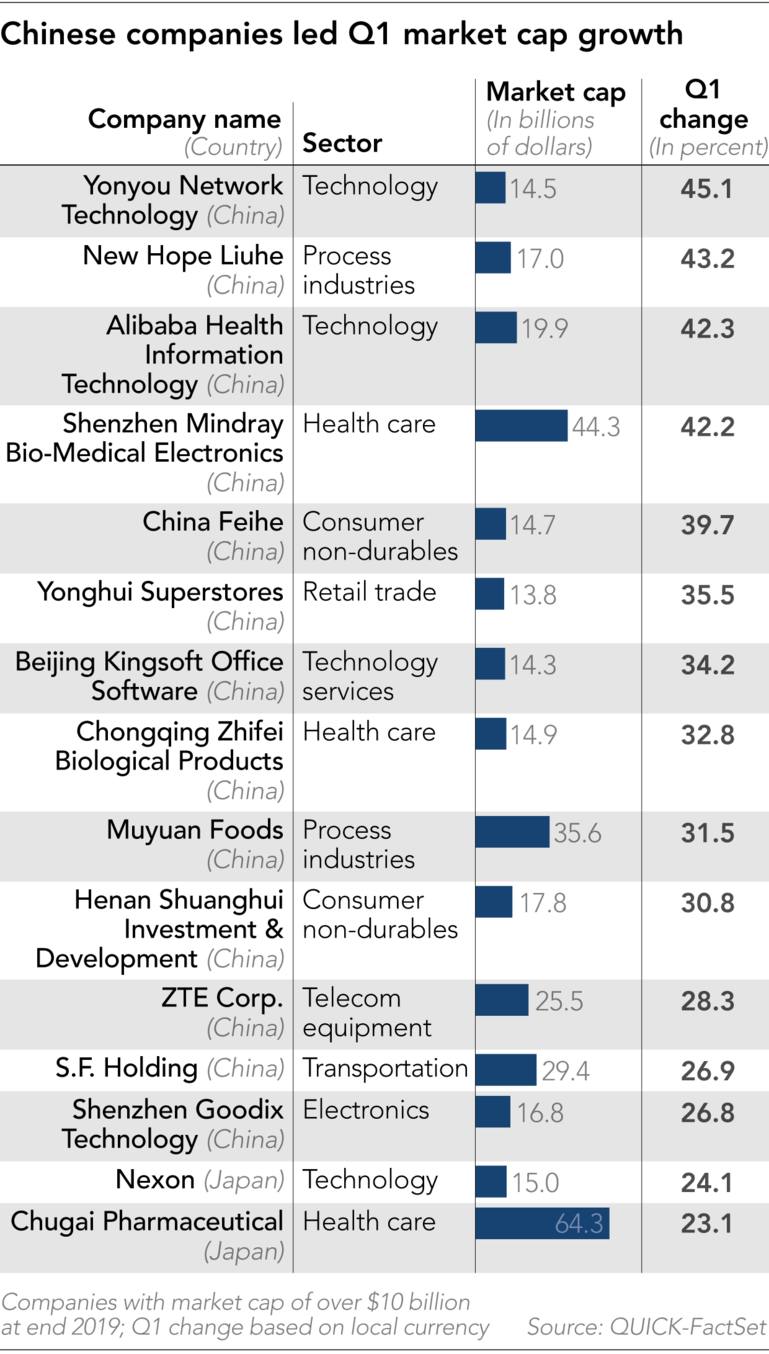 But most of the 502 companies were losers in the first quarter, the worst being banks in emerging countries. Non-performing loans could increase amid the economic downturn, and rate cuts by central banks to dodge the effects of the coronavirus would trigger plunging revenues.

Many private-sector banks in India -- once investor darlings -- have seen externalities weigh on share prices, especially in March. The collapse of Yes Bank, which forced the Reserve Bank of India to impose withdrawal restrictions on the troubled bank, spooked depositors, sending shares of many private second-tier banks diving. Of note was IndusInd Bank, which saw its market cap crater 72.7% in the quarter.

Adding to the carnage was India's nationwide 21-day lockdown imposed in late March, a victim of which was Axis Bank. Investors became jumpy over the viability of the bank's business of focusing on small and midsize enterprises, many of which are now sorely distressed.

Banks in other emerging markets were also hammered. Shares in Indonesian banks tanked in recent weeks, and "face significant near-term asset-quality pressure, as a slowdown in economic activity will stymie credit growth," said Fitch Ratings in a recent memo. Bank Negara Indonesia was the country's worst performer among major banks, with its market value plunging 52.8%.

Tourism-related sectors were among the first to feel the pain at the start of the year, as the coronavirus wiped out travel demand. Among the worst-hit was Hong Kong-based casino resort operator Melco Resorts and Entertainment, whose market value dove 48.4%. Apart from the faltering 502, the region's major air carriers like Singapore Airlines, Korean Air Lines and Eva Airways dropped between 30% and 40% while AirAsia Group and Garuda Indonesia lost more than half their value.

Energy stocks were also hit with massive sell-offs. Thailand's state-backed oil and gas company PTT Exploration and Production lost 49.4%, becoming the country's worst performer as global demand for oil dropped while Japanese oil company INPEX Corp. dumped 47.3%. Both companies have been stung by the failure of OPEC countries and Russia to agree on production cuts, which has sent global output soaring and crude crashing to record lows.

The number of confirmed cases of COVID-19 reached 750,000 globally by the end of March, crowned with 36,000 deaths. China is now bracing for a "re-import" of the virus. Most of the rest of Asia faces a wave of new infections, arriving largely from the West and threatening populations with local transmission.

Among key factors affecting Asian stocks going forward is "whether demand from the European Union and North America could pick up materially in Q2, and that is largely dependent on the COVID-19 situation in those regions," Margaret Yang, Singapore-based analyst at CMC Markets, told the Nikkei Asian Review.

Governments and central banks in Asia have been rolling out multibillion dollar fiscal stimulus packages and adjusting monetary policy, which could help stock performance, "but more support is perhaps needed to prevent mass unemployment and a bad recession," she said.