"It's been weeks since I deleted a Foodpanda app from my smartphone," Praew Sreechumpol told the Nikkei Asian Review on Wednesday.

Praew was one of about 20,000 protesters, who gathered at Democracy Monument in the administrative heart of Bangkok on Aug. 16, calling for Thailand to transform into a democracy with the monarchy under the constitution. The 24-year-old said the online food delivery operator's advertising strategy left no choice but to discontinue using its services.

Foodpanda was one of about 25 sponsors identified by netizens in mid-August as a company that advertises on Nation TV, a pro-establishment mouthpiece.

Protesters' antipathy toward the media outlet was ignited when one of its reporters was caught using a different company name to interview a participant of the Aug. 16 rally in fear of being turned down. Online pro-democracy supporters urged people to boycott Nation TV as well as its advertisers.

In a statement on Aug. 22, Foodpanda said it would suspend all its ads on the channel over concerns about its reputation. But the damage had already been done. "Distancing from Foodpanda has little impact on my life. I can still order food through other services," Praew said. 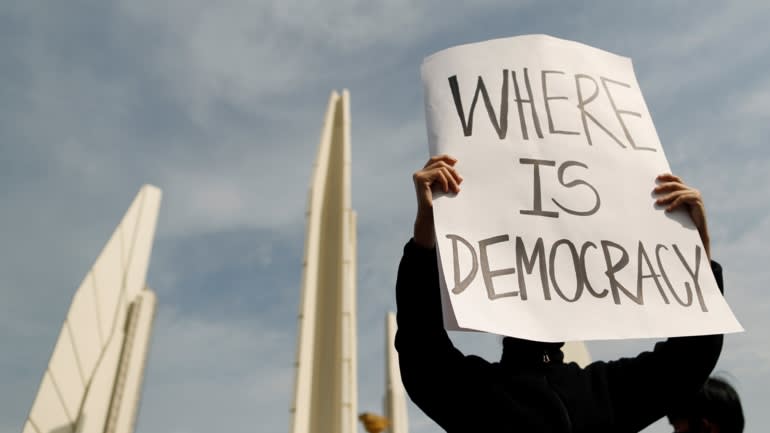 A pro-democracy protester holds a sign at an anti-government rally on Aug. 16. The demonstrators comprise students and many other youths unhappy with the lingering status quo.   © Reuters

It has been a long time since Thailand's food delivery market has been this competitive, thanks to the work-from-home trend due to the pandemic.

Ride-hailing giants Grab and Gojek are going head-to-head with Foodpanda. The industry is expected to grow by about 80% year on year in 2020, according to Kasikorn Research Center. The quick response by Foodpanda shows how much damage a boycott could cause.

Other sponsors also reacted. Food franchises such as Burger King, Coffee Club and Swensen's -- all under hospitality giant Minor International -- were also boycotted. The group said it will review its choice of media, while insurer Muang Thai Life said it would stop advertising on Nation TV.

It is unclear yet whether name-and-shame campaigns directed at sponsors' de facto support of repressive authorities is deep-seated or just a reflection of a fleeting "cancel culture." Shine Bunnag, Nation Multimedia Group's chairman, told Reuters the boycott was "social bullying from a group of keyboard thugs."

But raising pro-democracy awareness through spending power has become a trend in Asia. Calls to boycott Disney's live-action adaptation of "Mulan" emerged in August 2019, when main cast member Liu Yifei voiced support for Hong Kong police despite allegations of violence against pro-democracy protesters.

The boycott gained momentum in Hong Kong, Taiwan and Thailand after it kicked off on Sept. 4. It also signaled that it was partly directed toward China's Xinjiang Uighur Autonomous Region, which has been internationally condemned over human rights abuses.

Thai student activist Netiwit Chotiphatphaisal asked followers on Twitter to avoid patronizing "Mulan," so that "Disney and the Chinese government know that state-sponsored violence against the people is unacceptable."

Pro-democracy protesters from Hong Kong, Taiwan and Thailand have initiated an online movement called the "Milk Tea Alliance," naming it after the beverage all three communities enjoy.