Thai exports of 'the king of fruits' surge to China 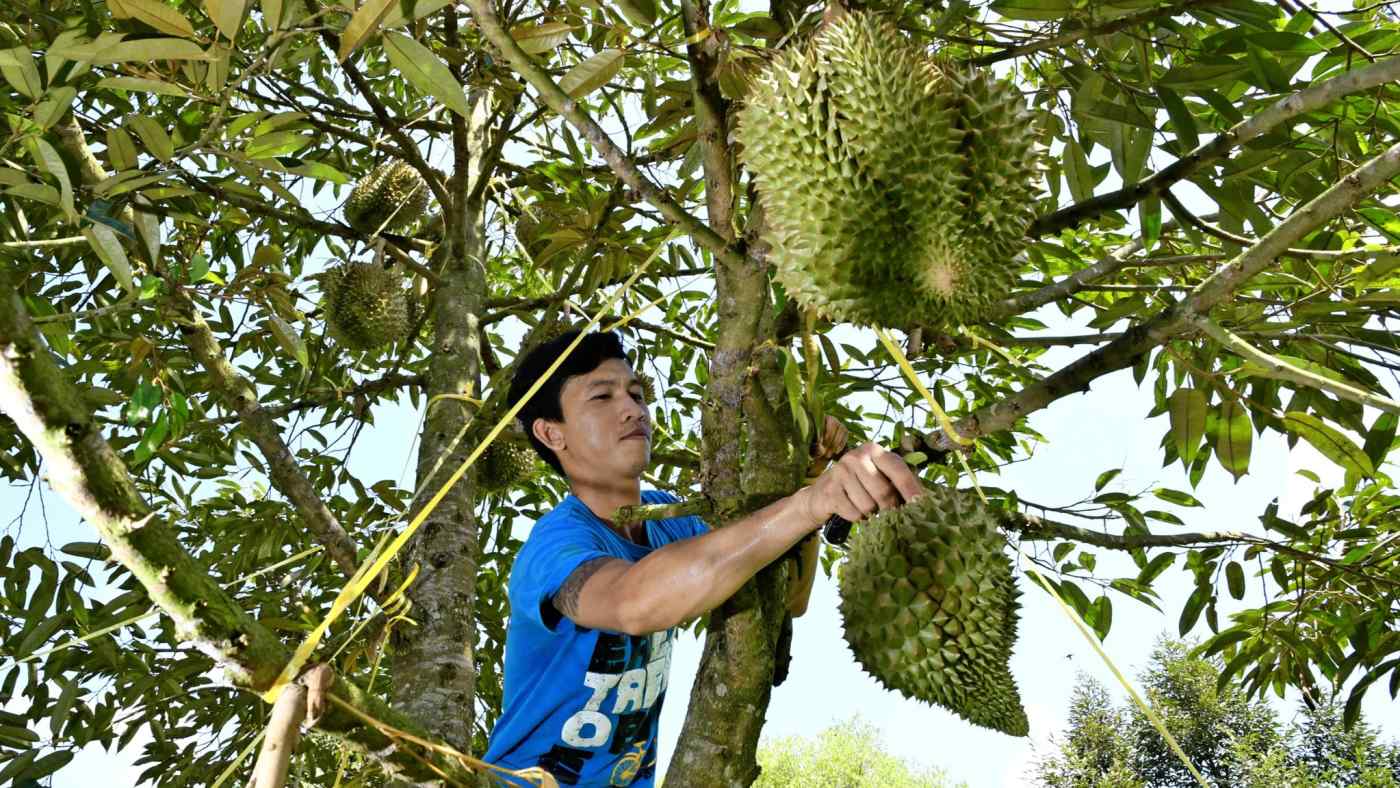 BANGKOK -- The durian, known by many in Southeast Asia as the "king of fruits," is currently in season, and its powerful odor emanates from street vendors and hangs over Bangkok. But domestic consumption is actually on the decline, while exports rise sharply -- especially to China.

Thailand's durian exports have grown to five times the level of domestic consumption due to dramatic economic changes in Asia. These include improvements in cross-border transport networks and the rise of internet commerce that directly connects producing countries with consuming ones.

In eastern Thailand's Chanthaburi Province, which accounts for nearly half of the country's durian production, the harvest was recently in full swing. At a farm about four hours' drive from Bangkok past plantations of rubber, pepper and other crops, young men chopped durians as large as 20 cm to 30 cm from trees several meters high. Others were stuffing the fruit into jute sacks.

The farm had 700 durian trees on a lot of 64,000 sq. meters. The fruit was being harvested from 340 of these trees that were eight to 15 years in age. Trees around eight years old produce up to 25 durians each, while up to 80 durians can be harvested from trees 15 years old.

Durians that weigh between 2 kg and 6 kg fetch the top price of 70 baht ($2.09) per kilogram from buyers, with the price falling to 40 baht for the bigger ones.

Pattanan Jamphot, 58, who has owned the farm for over two decades, said almost all of the output from her plantation is exported to China. Durians at the farm are cultivated to reach the optimum size for export, she said.

After being harvested, the durians are packed into boxes marked with Chinese characters at a roadside logistics facility. They are then shipped in containers on big trailers to China, a journey that takes four to five days.

Durians are increasingly being shipped overland instead of by sea due to falling costs, thanks to improvements to cross-border roads in Southeast Asia, said Panuwat Maikaew, president of the Chanthaburi Durian and Mango Export Association.

Xie Bo, a 34-year-old Chinese purchaser, said he ships durians from Chanthaburi to Beijing, Shanghai, Guangzhou and Hunan, where he sells them for 25 to 30 yuan ($3.70 to $4.40) per kilogram. At a supermarket in Dalian, each durian weighing around 3 kg is priced at about 120 yuan.

China, including Hong Kong, was the biggest importer of fresh durians, purchasing 80% to 90% of total Thai exports through 2016. Brisk demand in China has undercut Thai domestic sales.

In 2017, however, Thai durian exports underwent a drastic change as Vietnam suddenly surpassed China as the biggest importer. While combined shipments to China and Hong Kong decreased 29% in 2017 from the previous year, exports to Vietnam tripled to 256,000 tons. It was a whopping 26 times increase from three years earlier.

Did Vietnam's rapid economic growth suddenly prompt its citizens to become bigger consumers of the king of fruits than the Chinese? On the contrary. Of the durians shipped to Vietnam, 80% to 85% are re-exported to China, according to Panuwat of the Chanthaburi exporters association.

China's economic success means it can now afford to import premium foods from all over the world. The durian has become especially prized because of its rich fragrance and taste. There are even shops in the country specializing in the fruit. Experts say Thai exports statistically counted as bound for Vietnam eventually make their way to China, with shipments to the world's second-largest economy rising steadily year by year. 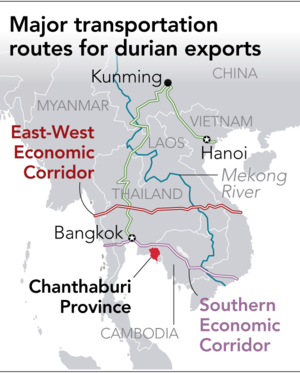 Throughout the countries of the Mekong Basin, cross-border roads are being built at a brisk pace to connect Vietnam, Laos, Thailand, Myanmar and Cambodia. Economic integration is proceeding steadily, with more trucks and money moving across borders, and customs clearance procedures becoming easier.

This is not just the case for shipments from Thailand. From the town of Muse in northeastern Myanmar's Shan State along the Chinese border, trucks loaded with watermelons and pineapples cross the border in a steady stream. The construction of a road connecting Mandalay, Myanmar's second-largest city, with Kunming, the capital of China's Yunnan Province, is well underway. Myanmar's exports of food and other goods to China are rising.

But it is durians that are all the rage in China.

At an event in Bangkok in mid-April, Jack Ma Yun, executive chairman of the Chinese e-commerce giant Alibaba Group Holding, said the company was moving to make durians and other farm products from Thailand available in China. "Quality Thai agricultural products such as fragrant rice, durians and other tropical fruits in particular, are sought after by the Chinese consumer," he said.