BANGKOK -- Thai hotels have resumed operations after the government gradually eased lockdowns imposed over the novel coronavirus pandemic. But with international flights still banned, foreign tourists are unavailable to help the industry return to profitability.

That leaves domestic travelers as the only game in town and hotels are engaging in an all-out bid to entice them through unprecedented discounts, a price war that may offer little respite to their bottom lines.

Thailand's cabinet on June 16 approved a 22.4 billion baht ($720 million) package to help boost the tourism industry, which is estimated to contribute around 20% of the Southeast Asian country's gross domestic product. The package includes subsidies for travel expenses.

That has also encouraged Thai hoteliers to kick off campaigns and promotions to offer the lowest rates as they aim to gain back at least some revenue after being closed for nearly two months due to the coronavirus pandemic, which has so far killed nearly 60 people in the country.

Centara Hotels and Resorts, a hospitality unit of local conglomerate Central Group, has cut its room rates by 50% on average.

At a hotel on the southern resort island of Samui, the company cut the charge by more than two-thirds to 1,360 baht ($44) per night from the 5,000 baht it charged before the pandemic. Customers can even get the price as low as 960 baht per night with free half-board if they hold hotel membership and stay more than four nights. That marks its lowest ever rate, according to the company. An Intercontinental Hotel staff wearing a protective face mask and gloves in Bangkok. Hotels in Thailand have introduced strict hygiene rules amid the coronavirus pandemic.   © Reuters

Given such competition, analysts expect revenue per available room to drop as much as 65% this year from 2019. Many hotels have already gone out of business due to the sharp drop in prices.

There is no official data on how many hotels went bankrupt, but Supawan Tanomkiatipume, president of the Thai Hotels Association, said there were up to 80 in famous tourist cities on offer to be sold, with most of them lower end 1 or 2 star-establishments.

Apart from price-cutting, Dusit International launched a charity project to attract Thai tourists. The company offered a 500-baht donation as cash-back money for guests to be donated equally between the Thai Red Cross Society and the Elephant Alliance Association, an organization working to improve quality of life and welfare for the animals.

"We have also leveraged our resources to give back to our communities," said Suphajee Suthumpun, CEO of Dusit International. 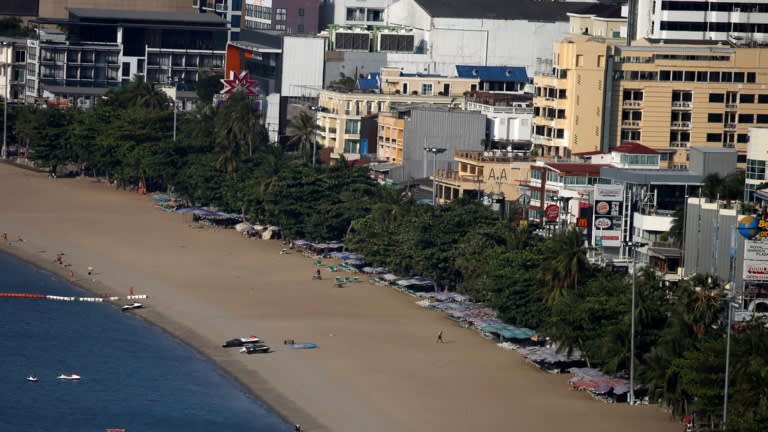 A mostly empty beach in the Thai seaside resort of Pattaya. With travel restrictions still in place in many countries, the Thai hotel industry is now trying to attract domestic tourists by offering sharp discounts.    © Reuters

Thailand's tourism industry has heavily relied on foreign tourists. In 2019 they numbered 39 million and generated up to 1.9 trillion baht ($61.4 billion) in spending, according to the Ministry of Tourism and Sports. Domestic tourists, meanwhile, contributed 1.1 trillion baht, the data show.

Asia Hotel Bangkok is already one such example. It offers hotel-grade food delivery services to bring in extra money to help fill the holes left by cheap room rates, which have been cut as much as 80%. Crowne Plaza Bangkok Lumpini Park also offers food delivery. "It's not as good as the normal day, but it can help us earn some money to help offset losses," said Take Takeuchi, manager of in-house Suikin Japanese restaurant.

One hotel operator has proved a rare exception by not competing on price but instead focusing on high-end tourists: Minor International. "We don't see any benefit to fight in the price war," said Chaiyapat Paitoon, the company's chief strategy officer. In contrast, we try to offer the best services with higher standard to attract premium-grade tourists as we expected the situation to be better in the second half of the year."

Minor said it offers premium hygienic service matching the World Health Organization's standard with all check-in and checkout being done via a touchless method. All paper work during the process are done via an app and online channel. Further, it says all door nobs and frequently touched objects are covered by antimicrobial copper film. "We can ensure that we are the first one in Thailand which has WHO's hygienic standard and that should help us to gain trust from high-end tourists," said Chaiyapat.

Despite such pandemic response efforts, however, analysts said weak consumption continues to be the biggest negative factor weighing on the Thai tourism industry. K Research Center forecast that Thai domestic tourism spending would drop by more than 50% to around 485 billion baht due largely to weakening consumption.

Another factor is that the government's social distancing measures to keep the pandemic under control could automatically put a ceiling on the number of hotel guests. That is because there are limits on how many of them can gather in facilities such as bars, seminar rooms, restaurants, swimming pools and fitness centers to prevent infections among visitors.

Such restrictions mean that hotel operators can't immediately recover at a time when operational costs are increasing due to more stringent hygiene standards.

"About 60 to 70% of hotels in Thailand are now ready to resume business," said Supawan of the Thai Hotels Association. "However, the rest [of the] 30 to 40% would need more time to adjust their business and get back onto the market again when they see a certain rise in demand later this year."