BANGKOK -- Thai banks have strengthened their push for the use of online banking services over physical branches with a suite of revamped mobile banking applications.

State-owned Krung Thai Bank, one of the latecomers to the online banking market, has announced a new version of their app. The Krungthai NEXT app comes after the bank introduced the older version, Krungthai netbank, eight years ago.

"We expect the app will be able to help increase the number of mobile banking users to 10 million users by 2019," said Payong Srivanich, president and chief executive of the bank. Currently Krung Thai Bank holds more than 30 million bank accounts, of which 5 million are mobile accounts.

On Oct. 10, Kasikornbank, one of the early adopters of retail mobile banking, also released a newer version of its app, K Plus. Another retail-focused bank, Siam Commercial Bank, announced on Thursday that it would add new features to its app. 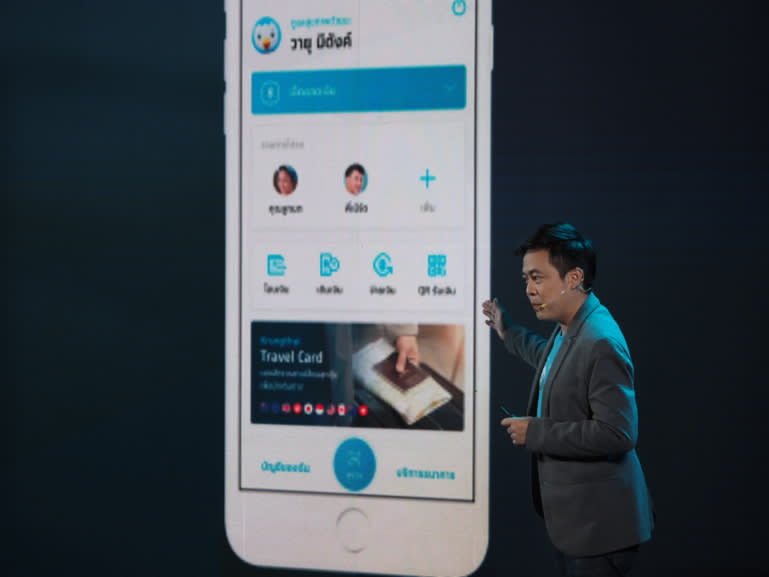 Jakkrit Klinsmith of Krungthai Bank explains what people can do with the bank's new app at the launch event on Wednesday. (Photo by Masayuki Yuda)

The banks' moves can be seen as part of an effort to refine their business productivity in a tougher operating environment. For the three months to September, combined net profit at Thailand's four largest lenders -- Bangkok Bank, Kasikornbank, Krung Thai Bank and Siam Commercial Bank -- increased by 6.9% compared to the same period last year, to 37.1 billion baht ($1.13 billion).

As in other parts of the world, the Thai central bank's prolonged low interest rate is slowly but steadily slashing those banks' profitability. The Bank of Thailand is one of the central banks in Southeast Asia that have not raised their interest rate, although commercial bank analysts and brokers have suggested there might be a rise in a few months' time.

The current interest rate is at a record low level of 1.5%. Moreover, the central bank has advised commercial banks to curb their mortgage lending -- a measure intended to combat the property bubbles that are forming around the country.

On the back of the surge in mobile devices and mobile banking, Kasikornbank and Siam Commercial Bank are planning to close about 10% of their branches, mainly in the central Bangkok area, with more than 90% of money transfer orders already coming from mobile banking apps.

Even listed Krung Thai Bank, which takes pride in its ability to provide universal services to customers in all provinces of Thailand, is looking to increase efficiency. After they have assessed the digital shift that is likely to accompany the recently-introduced app, "we may have to start rationalizing the number of branches," said Payong.

Statistics show a strong trend in the shift from offline to online in Thailand. According to a survey by Krung Thai Bank, Thai people spend 10 hours a day online -- the longest in the world.

About 80% of the Thai population uses a mobile phone. Among mobile phone users, 56% use mobile banking, while 77% use messaging, 75% watch videos online and 66% play games. However, mobile banking penetration is lower than in countries like China, indicating there is room for growth in the Thai market.

But bank apps in Thailand seem to have become more than just an online banking tool.

Siam Commercial Bank's SCB Easy provides a service to book movie tickets. Kasikornbank plans to connect its users to small- or medium-sized retailers that do business with the bank, providing users with a wider range of purchasing options and stabilizing borrowers' business at the same time. Users can also easily make donations to organizations through Thai apps and obtain payment slips for them, as donations in Thailand are mostly exempt from tax.

Thai banks are thus aiming to become portals for all sorts of payments. This is in line with the ruling junta's plan to transform the country into a so-called smart society. The provision of online payment systems forms a large part of the government's 'Thailand 4.0' plan.

One important benefit of promoting e-payments is that the government can keep a record of how people use money. It will help the government to gather big data on consumption trends and leaves less opportunity for money to be used in illegal activities such as money laundering, trafficking and tax evasion.

In addition, Thailand has so far not been dominated by any of the e-payment systems that have become prevalent in other parts of the world. None of the big technology groups such as Apple, Google or Alibaba have gained a strong online payments presence in Bangkok, with money transfer through domestic banks still a popular tool among Thais. The government likely feels that it will be easier to regulate the payments system when things are done through Thai banks, than through foreign tech companies.