BANGKOK -- Retail in Thailand is coming back to life as businesses are allowed to reopen after daily tallies of coronavirus cases have not exceeded single digits for weeks.

But consumers are awakening to a new service industry, one transformed by the strict preventive measures that were put in place to halt the contagion.

The government eased the national lockdown on May 17, allowing department stores, restaurants, supermarkets, beauty salons and other establishments to reopen. But store operators are putting safety first.

Central Retail, a unit of conglomerate Central Group and operator of 23 Central Department Stores nationwide, imposed a strict "safe-screening-clean-distancing" campaign. Each employee must wear a mask and face shield and have their temperature checked every three hours. Stores also increased the rate of fresh air circulation to more than 10 times per hour.

Customers are asked to maintain social distancing of 1 to 2 meters, while stores are limiting entry to ensure there is just one person per 5 sq. meters of space. Shoppers are also encouraged to pay via cashless systems, and coins and bank notes are sanitized for cash transactions. A store clerk wears a face shield and mask at Central World. (Photo by Akira Kodaka)

The Mall Group, another major retailer, limits entry to one person per 2 sq. meters and provides a virtual fitting room that uses augmented reality to help shoppers view themselves on a screen with clothes. The company sanitizes stores every hour and ensures an abundance of freely available alcohol gel.

Some Bangkok malls, meanwhile, have even brought in mobile robots to automatically spray sanitizer throughout premises.

CP All, the listed retail arm of Charoen Pokphand Group -- Thailand's largest conglomerate and operator of about 12,000 7-Eleven convenience stores -- has set up thermal screening desks in front of every establishment across the country. People with a temperature exceeding 37.5 C are not allowed in.

As for major restaurant chains, diners must have their temperatures checked before entering eateries, while the number of seats has been reduced to maintain social distancing of 1 to 2 meters. Plastic shields separate each diner. Moreover, people are not allowed to stay longer than two hours and all tables and seats must be sanitized immediately after customers leave. 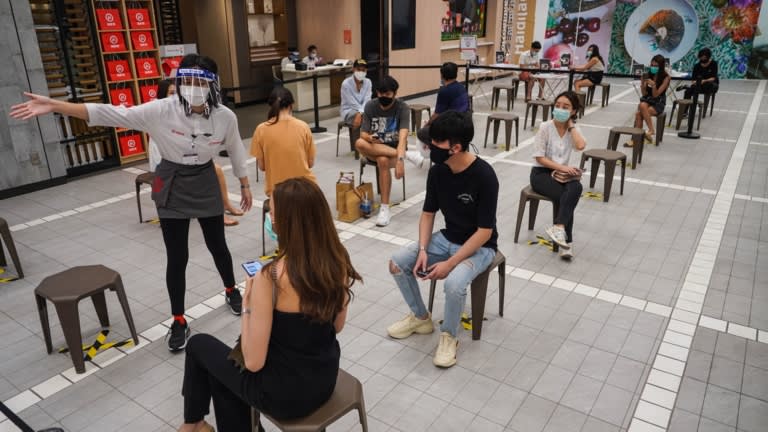 People maintain social distancing as they wait at a restaurant in a Thai shopping mall. (Photo by Akira Kodaka)

These and other companies have been aided in their fight against the contagion with a government-initiated monitoring platform.

Called Thai Chana, or "Thais win," major shops and department stores are participating in the platform, the emblem of which displayed by an establishment ensures a level of safety, although use of the platform is not mandatory.

Developed by the Center for COVID-19 Situation Administration, an agency dedicated to monitoring the coronavirus, the platform lets the government monitor the number of people in shops at any given time.

Each registered establishment displays a QR code at the entrance that customers scan with their smartphones. After reading the code, shoppers enter their phone number and are allowed entry. When leaving, they rescan the code.

And it works both ways: Users can check to see how many people are in a shop before entering. If too crowded, they can go elsewhere.

Shops that are not participating must still have customers write down their names and phone numbers to allow authorities to trace them if any infected patrons are later found to have visited.

"This platform will help us trace contacts," said Dr. Taweesin Visanuyothin, the CCSA spokesperson. "Then we can take them to state quarantine facilities in order to control the pandemic."

He stressed that the privacy of those who use the platform and give their names and phone numbers will not be compromised, as information is automatically deleted after 60 days. 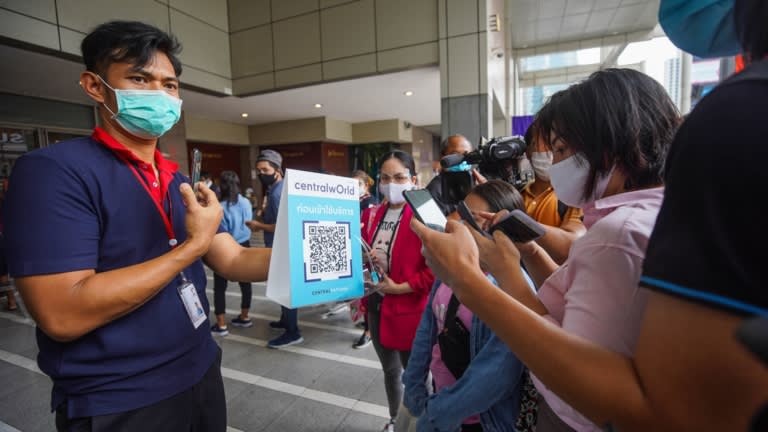 Shoppers scan the Thai Chana QR code at the entrance to Central World shopping mall in Bangkok on May 17. (Photo by Akira Kodaka)

More than 26,000 businesses had registered with Thai Chana on the first day of the easing of the lockdown on May 17. And more than five million individual Thais accessed the platform on the same day as the government allowed department stores and restaurants to reopen nationwide, reflecting popular support for authorities in their fight against the deadly virus.

"At first I thought it was annoying, as I have to check in every time if I want to get into department stores," said Saowanee Ekpunyachai, a 45-year-old office employee, who went shopping for the first time after Bangkok's two-month lockdown was lifted. "However, it's useful."

Budget airlines Thai AirAsia, Nok Airlines and Thai Smile have resumed domestic operations but with restrictions, such as capping seating capacity at 60% to 70% and leaving the middle seat in each row empty to maintain social distancing.

The Civil Aviation Authority of Thailand has ordered cabin crew to wear face masks and full protective equipment, including face shields and gloves, at all times. No meals are served during flights. Further, more automated kiosks are being introduced at airports to promote touchless check-in. And when passengers use staffed counters, hands and equipment must be immediately sanitized.

Despite such measures, many hotel operators are reluctant to resume operations as the country's tourism industry remains fragile without foreign tourists and business travelers. And limits on capacity as well as strict sanitation measures for meeting rooms, ballrooms and restaurants increase operating costs, analysts say.

Wacharin Kongcharoen, a wellness consultant, said that restaurants and meeting rooms need to be renovated to maintain social distancing to separate everything by around 1 to 2 meters, while all equipment has to be sanitized immediately. "I don't think all hotels are ready to open with these higher costs at a time when revenue from tourists is unlikely to get back to normal," Wacharin said.

After closing all 28 hotels nationwide on April 1 due to the lockdown, Central Group has only just resumed operations at its flagship Centara Grand at Central World in Bangkok. Another hotel major, Minor International, announced it was raising 25 billion baht ($784 million) to rebuild finances as it prepares to resume business.

Although Minor has not revealed how it will spend the money, analysts expect the company will invest massively in renovations at several hotels, particularly in major tourist destinations, to meet not only government safety standards but also stricter expectations from visitors.