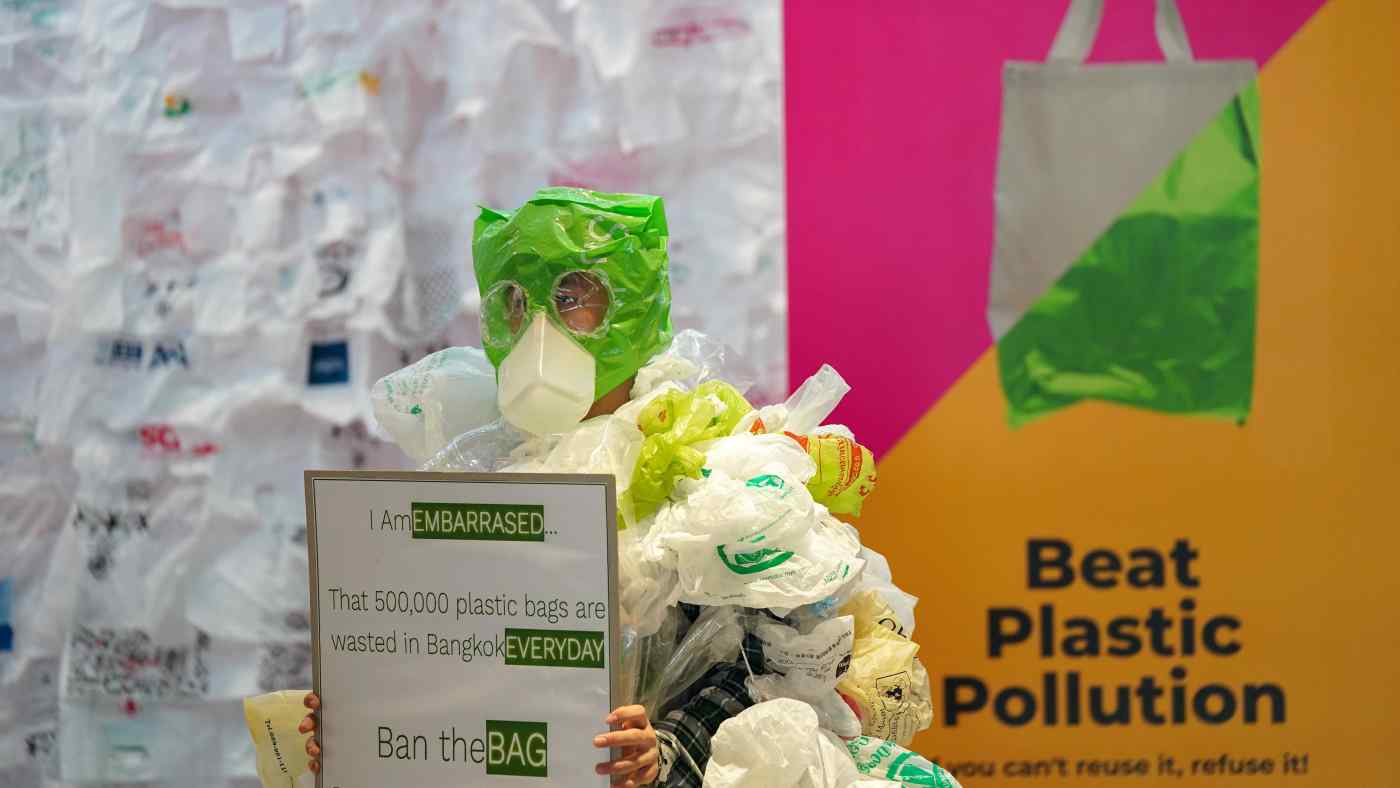 A Thai activist demonstrates in a call for a ban on the use of plastic bags. Anti-plastic sentiment is on the rise in Thailand since it was named as the world's fifth-biggest source of marine plastic waste.   © Reuters
APORNRATH PHOONPHONGPHIPHAT, Nikkei staff writerDecember 27, 2019 12:05 JST | Thailand
CopyCopied

BANGKOK -- As a ban on single-use plastic bags kicks in in Thailand, where plastic waste is becoming an increasingly serious social problem, producers including state-owned petrochemical giant PTT Group are rushing to shift to eco-friendly materials and cut production of potentially polluting goods.

As many as 25,000 retail outlets across the Southeast Asian country will stop providing single-use plastic bags from Jan. 1 under the industry's "Everyday Say No to Plastic Bags" campaign. Major retailers such as Central Group, The Mall Group and 7-Eleven convenience stores under Charoen Pokphand Group will participate in the movement.

Major supermarket chains will also join the anti-plastic bag campaign, including Tesco Lotus, Makro and Big C. Under the government and industry initiative, Thailand will also stop using Styrofoam food containers, plastic straws and plastic cups by the end of 2022.

Other Asian countries are also moving away from plastic packaging. India has set a goal of eliminating disposable plastics by 2022, and at least 24 states have already banned or restricted their use. In Indonesia, plastic bags have been banned from stores since January in Denpasar, Bali, a popular resort.

Starting Jan. 1, Thai authorities will also ban the import, production and sale of health and beauty products containing plastic microbeads, which are commonly used in products such as facial scrubs, to stop the tiny particles from contaminating the environment. As many as 25,000 retail outlets across Thailand will stop providing single-use plastic bags from Jan. 1. (Photo by Yohei Muramatsu)

Thailand produces around 2.7 million tons of plastic and foam waste each year, or an average of 7,000 tons per day, according to the Ministry of Natural Resources and Environment. Of the total, 2 million tons are plastic and mostly unrecyclable.

In a 2017 report, U.S.-based environmental advocacy group Ocean Conservancy named Thailand as the world's fifth-biggest marine plastic waste polluter after China, Indonesia, the Philippines and Vietnam. This painful truth, to which Thailand had to admit, urged both public and private sectors in the country to address the issue seriously.

Pictures that have been widely shared in Thailand of numerous tiny pieces of plastic in the intestine of a dead, orphaned dugong -- a marine mammal -- and the 7 kilograms of plastic waste found in the stomach of a dead deer at a Thai wildlife sanctuary served to quickly raise awareness about environmental conservation and revealed the danger of plastic waste in the country.

Major petrochemical companies and plastic producers are waking up to the shift in consciousness, trying to capitalize on rising demand for recyclable plastic and bioplastic with an eye to exporting such products as well. Think tank the Kasikorn Research Center has forecast that Thai bioplastic exports will rise in value by 14% to be worth 19.1 billion baht ($632 million) in 2020 from an estimated 16.7 billion baht in 2019.

PTT Global Chemical, a subsidiary of petrochemical conglomerate PTT, is in talks with U.S.-based NatureWorks, a leading bioplastic company, to form a joint venture to produce about 20,000 tons of bioplastic per year. In the meantime, PTTGC has set a target to cut the production of single-use plastic by 150,000 tons every year for the next five years, from around 2 million tons currently.

In September, PTTGC teamed up with Austria-based Alpla, a major recycler and high-quality plastic packaging solutions provider, and plans to invest up to 2 billion baht to set up a plastic recycling plant in Rayong province with a capacity of 40,000 tons per year.

Global players are also stepping up bioplastic production in Thailand. French energy group Total, along with Amsterdam-based biochemicals company Corbion, plans to invest more than $100 million to build a large-scale production plant of polylactic acid, a bioplastic polymer made from sugar cane that is a raw material used in the production of bioplastic bags and other products, with a capacity of 75,000 tons per year. 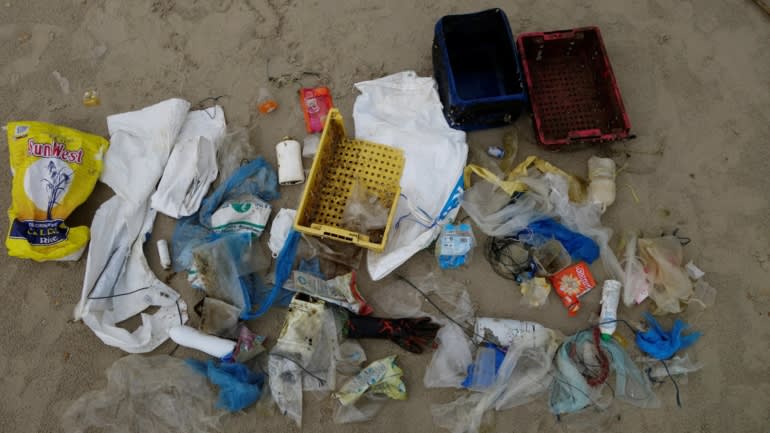 A collection of plastic items washed up by the sea on a beach on the island of Ko Samet, Thailand.   © Reuters

"As Thailand can grow around 30 million tons of cassava a year and more than 100 million tons of sugar cane, it is perfect for the country to be the hub of bioplastic," Kittiphong Limsuwannarot, president of the Thai Bioplastic Industry Association told the Nikkei Asian Review. Cassava starch can also be used in the production of polylactic acid. The country "can be a hub for the production and export of high-value bioplastic products."

The production capacity and exports of bioplastic from Thailand have risen steadily over the past few years and are expected to see a sharp increase ahead. Thailand exported 2.42 million tons of bioplastic in 2018 and the amount jumped to 18.5 million tons during January-July 2019, signaling very strong global demand.

The worldwide bioplastic packaging market is expected to grow to $24.84 billion by 2026 from $5.94 billion in 2018, according to market researcher Fior Markets.

Siam Cement, the country's industrial conglomerate, set a target of cutting its use of single-use plastic to 10% by 2024, down from around 18% currently. In addition, the company pours about $86 million each year into recycling business projects.

Bangkok-based Indorama Ventures, the world's largest producer of polyethylene terephthalate, or PET, a recyclable material commonly used in plastic bottles, has noticed a tailwind for its business. On the back of growing demand, "We have been mandated by our customers [who] want more recyclable products and therefore we have to add more facilities," president Aloke Lohia told the Nikkei Asian Review.

On Dec. 4, Indorama announced it had acquired 100% of Green Fiber International, a California-based PET recycler with a total production capacity of 40,000 tons per year. Financial terms of the deal were not disclosed.