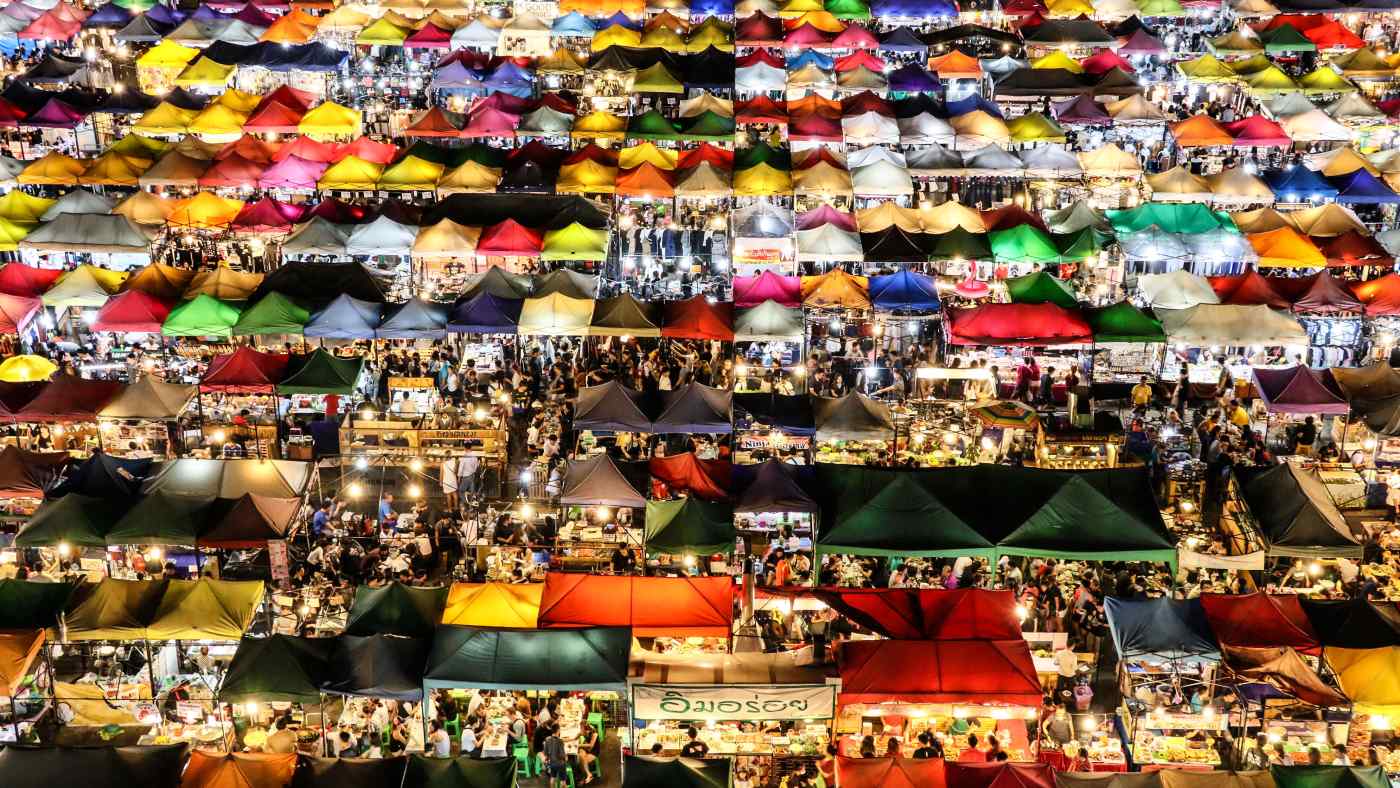 The Train Night Market Ratchada, which used to attract many Bangkok residents and international tourists, is one of the most recent business victims of the coronavirus. (File photo by Shinya Sawai)
MASAYUKI YUDA, Nikkei staff writerAugust 13, 2021 13:57 JSTUpdated on August 13, 2021 17:32 JST | Thailand
CopyCopied

BANGKOK -- Tourist attractions are gradually disappearing ahead of Thailand's full reopening for vaccinated visitors in mid-October as the epidemic of the delta strain bruises Southeast Asia's second-largest economy.

The Train Night Market Ratchada, Bangkok's popular twilight flea market, known as Talaat Rot Fai, became one of the most recent business victims of the coronavirus. It had been scheduled to resume operation on Aug. 1 after closing temporarily due to the government's COVID-19 restrictions, but now will close indefinitely instead.

In June, Prime Minister Prayuth Chan-ocha declared in a televised address that Thailand would fully reopen its borders to vaccinated tourists in 120 days, insisting that tourism receipts would be vital for economic recovery. Although the government has not taken back the target, outbreaks of the delta variant starting in July have made it more difficult to start welcoming tourists on time.

The worsening COVID-19 situation makes international tourists in particular think twice about coming to Thailand. The U.S. Centers for Disease Control and Prevention has designated the kingdom at its highest COVID-19 level, Level 4. "Because of the current situation in Thailand, even fully vaccinated travelers may be at risk for getting and spreading COVID-19 variants," the agency says on its website.

The government is optimistically counting on pent-up demand from incoming tourists once it reopens. Although Thailand remains full of cultural and natural attractions that would appeal to international visitors, waning tourism resources may adversely affect tourist inflow or guest satisfaction in the near future. The few stalls remaining at the Train Night Market Ratchada in Bangkok on Aug. 9 were to be removed soon. The market had been scheduled to resume operation from Aug. 1 but now will close indefinitely. (Photo by Masayuki Yuda)

Talaat Rot Fai, which opened in 2015, quickly charmed Bangkokians as well as international tourists because of its distinct look from above, with its orderly rows of stalls' fabric canopies looking like a pixilated abstract painting.

Photos of the market taken from the fourth level of a parking lot at the nearby Esplanade Ratchada mall became almost a cliche on social media like Twitter and Instagram. In pre-COVID times, visitors enjoyed shopping for antiques and souvenirs, eating food from stalls, having drinks and socializing with strangers.

It is now a mere shadow of itself. Only a few stall tents were still standing as of Monday, and one was being taken down. The poles and cables that had brought power to illuminate the colorful canopies now lay on the concrete surface.

A vendor said she had been told to pack up and leave in two weeks. A market administrator, according to a local report, said it was not closing for good. But it appeared to have been torn down to such a degree that it would not be able to reopen quickly even if international tourists came back in October, as the government had aimed.

In Thailand, roughly 20,000 COVID cases have been reported daily during the past week, taking the total of confirmed cases since the start of the pandemic past the 800,000 mark on Wednesday. The government has implemented soft business lockdowns and a curfew in affected provinces to contain outbreaks. The country's slow inoculation program did not help to contain the situation.

During the country's first wave, in March 2020, and the second, from December 2020, Talaat Rot Fai had to go through months of closure but survived -- barely. The third wave, from this April, made worse by the delta variant, and the subsequent nighttime curfew dealt the final blow to the after-dark market.

Elsewhere in Thailand, Sriracha Tiger Zoo decided to close indefinitely after 24 years in operation. The tourist attraction in Chonburi Province, 90 km southeast of Bangkok, was popular among Thais and foreigners such as Chinese, Vietnamese, Indonesians and Russians. The zoo used to welcome 1.5 million visitors per year.

"On days when there are no foreign tourists coming in, we cannot keep the business going," the zoo said in a Facebook post. "We believe running private tourism businesses like a large zoo requires physical and mental strength, patience, and most importantly capital."

The zoo tried to sell 11 elephants for 3 million baht ($89,600) each in May, but the attempt was stopped by the authorities because elephants are a protected species that can only be exchanged between zoos for research or propagation purposes.

Roughly 5,000 animals -- including tigers, crocodiles, elephants and camels -- were moved to a new home on land owned by the zoo's management company for the time being. Animal rights groups had criticized the zoo for using tigers in circus shows and keeping them in poor conditions.

Sriracha Tiger Zoo said it cannot predict if it will reopen. "We may create a new landmark," it added, suggesting that it may move from its current location if it ever does reopen.

Talaat Rot Fai and Sriracha Tiger Zoo are just examples of the many tourist attractions that were not able to make it through the waves of the pandemic. The early reopening proposed by the government is aimed at preventing more companies from going out of business.