BANGKOK -- Thailand's television market has been languishing for the past few years, but that is expected to change as the World Cup approaches, giving the country's soccer-crazy consumers a reason to upgrade to larger screens.

And now electronics makers are tantalizing them with new TV models.

At a Bangkok outlet of Power Buy, an attendant in the TV section said he expects large-screen models to be hot sellers. Models with screens of over 50 inches were being prominently displayed.

The World Cup begins on June 14, with host Russia taking on Saudi Arabia in Moscow. The attendant said sales are expected to shoot up about a week before that initial match. 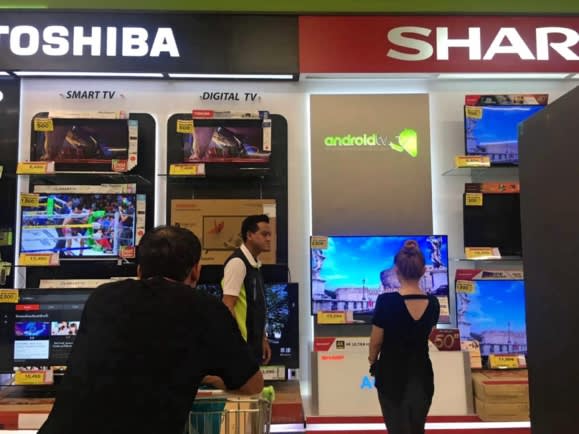 Thai electronics shops like this one in Bangkok expect a rush of TV purchases about a week before the World Cup gets underway in Russia on June 14.

Sony in April announced a plan to introduce 23 large-screen models in phases. It also has a buyer incentive program that lasts through July 15.

Panasonic is also offering incentives as it tries to get Thais to buy models featuring panels made of organic light-emitting diodes.

South Korea's LG Electronics has a campaign running through mid-July.

According to research company GfK Thailand, 2.6 million TVs were sold in the country in 2017, a slight improvement, but the market is yet to return to the brisk levels it experienced for a certain period through 2015. Thais are such avid soccer fans that even Bangkok's chronic traffic jams are said to clear up when some World Cup matches are played, depending on what countries are involved.

All matches will be aired live on terrestrial broadcast TV, for free, thanks to a government push for rights holders to keep the games off pay channels. A TV maker executive said this will give the electronics sector a big boost.

According to Tokyo management consultancy Dream Incubator, 66% of 550 Thai respondents in a survey last June said they planned to buy a TV within a year. The average amount they planned to spend was $529. This compares to $495 in Vietnam and $395 in Indonesia.

Japanese and South Korean TV makers are the top players in Thailand, but Chinese rivals, including Hisense Group and TCL, are stepping up their game.