BANGKOK -- Thai tourists are flocking to quintessential Japanese sightseeing spots, taking pictures of a golden pavilion or a huge lantern hanging from a giant gate, all without leaving their homeland.

Hinoki Land features Thai renditions of famous Japanese attractions such as Kyoto's Kinkaku-ji and the Kaminarimon, or "Thunder Gate," in Tokyo's Asakusa district.

The theme park, about a two-hour trip from Chiang Mai's city center in northern Thailand, opened last October and has quickly become a hot destination for locals who want a taste of Japan without the time or money needed for an actual visit.

After they walk under the lantern -- which says "lucky gate" instead of "thunder gate" as inscribed on the Kaminarimon lantern -- visitors can stroll through a line of vermilion torii gates, just like they would at the must-see Fushimi Inari Shrine in Kyoto. 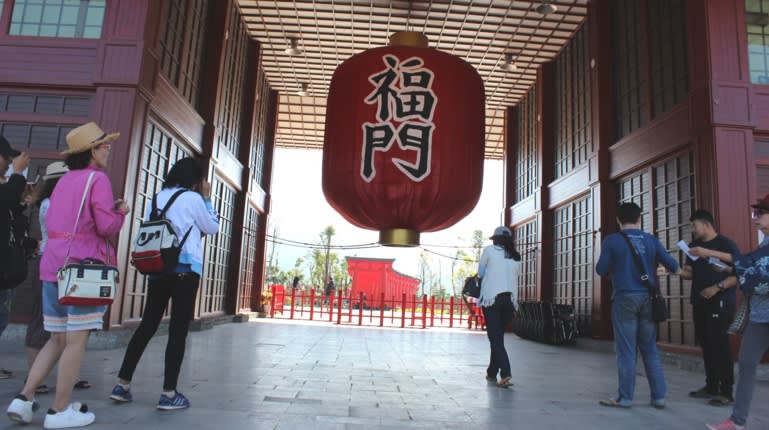 Hinoki Land's golden pavilion, a slightly larger rendition of the real Kinkaku-ji, offers one advantage that the original does not: Sightseers have access to the balcony, which offers panoramic views of the park and beyond. A school of colorful carp swim in a pond, and the park plays old Japanese pop songs like "Ue Wo Muite Arukou," a crossover hit from the 1960s known internationally as "Sukiyaki."

Nine out of 10 visitors to the Japanese-inspired park are locals.

"I've never been to Japan, but everything looks so real," said a 47-year old yukata-clad woman from Mae Sai, which sits on the border with Myanmar. "I took a ton of pictures."

Pattamarat Sutlerd, a 52-year-old self-employed woman from Bangkok, says this is her second visit. "I like coming here because I don't need to buy a pricey plane ticket."

Hinoki Land is the brainchild of Anirut Juengsutprasoet, who made a fortune importing hinoki cypress from Japan.

"Many Thai people cannot afford to travel to Japan even if they want to," said the former migrant worker who went to Japan when he was 19. "I wanted to create a place where everyone can experience the Japanese culture and traditions." In creating Hinoki Land, Anirut Jeungsutprasoet had in mind the many Thai people who can't afford to travel to Japan. (Photo by Marimi Kishimoto)

More well-to-do locals are traveling to Japan, thanks to growing service from low-cost airlines and the country's visa waiver program for Thai visitors that began in 2013.

Japan ranks third in drawing Thai travelers behind the neighboring Malaysia and Laos, Thailand's Ministry of Tourism and Sports says. Visitors to Japan jumped 15% in 2018, hitting a record of over 1 million.

These travelers posting pictures from Japan on their social media accounts help fuel interest in Hinoki Land, which welcomes 5,000 to 10,000 visitors a day. Tourists appreciate that the park lets them see replicas of key attractions in a single day.

Hinoki Land plans to expand, Anirut said. A traditional Japanese inn inspired by the Great Buddha of Kamakura as well as Itsukushima Shrine in Hiroshima should be completed as early as next year.