TOKYO -- With just two years to go until the Japanese capital hosts the summer Olympics in 2020, the city's real estate market is enjoying unprecedented growth.

Rising rents and an inflow of foreign capital are driving up real estate prices in the city, and many properties are being sold for considerably more than their value at the time of purchase. One developer has seen the market value of its assets rise to more than double their book value.

But analysts have warned of the possibility of a post-Olympic crash, and real estate companies are faced with the challenge of capitalizing on the boom while hedging against the risk of a downturn.

Recent talk in the industry has focused on the stirring of a sleeping giant.

Norway's government pension fund, one of the world's largest sovereign wealth funds, entered the Japanese market amid much fanfare two years ago, but made little in the way of notable investments.

Now, however, the fund has teamed up with Tokyu Fudosan Holdings and bought five properties for total investment of 130 billion yen ($1.15 billion).

Many see the move as having been prompted by forays in the Tokyo real estate market by investment funds from places like Singapore and Hong Kong.

"They are moving at an unprecedentedly high speed," said Masayoshi Miyamoto, president of Office R&M, a Tokyo-based office building broker.

Just two months after the center opened in April 2017, GreenOak paid more than 20 billion yen for an unoccupied unit on the eighth floor of the building from real estate developer Hulic.

Hulic earned around 8 billion yen of capital gain from the sale, far more than it expected. Within months, GreenOak had sold the space at an even higher price having found a tenant.

"Recently, foreign investors have been accelerating their spending on hotels," said a spokesman for asset management consulting company Vortex.

The company received five inquiries almost immediately after putting Hotel Emit in the Shibuya district on the market, four of which came from investment funds based outside Japan, including Chinese and Singaporean companies. The potential buyers are looking at Tokyo hotels as operating assets. 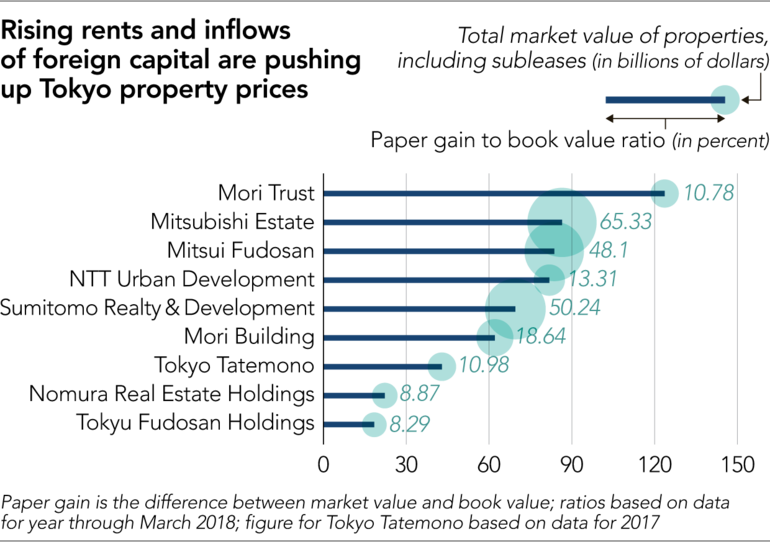 Foreign investment in Japanese real estate totaled 1.3 trillion yen in fiscal 2017, according to a survey by think tank Urban Research Institute. That is the highest figure since the company started gathering data in fiscal 1997, said managing executive officer Shigeo Hirayama.

The influx of foreign funds and rising rents have pushed up prices of office buildings and commercial facilities.

Mitsubishi Estate's property portfolio, a large proportion of which is held in Tokyo's Marunouchi business district, was worth close to 7.4 trillion yen as of March 2018 and is the most valuable in the Japanese real estate industry.

Its total value increased by about 600 billion yen on the year, partly due to the addition of new properties, but mainly because of the higher profitability of its office buildings. The Marunouchi Building overlooking Tokyo Station symbolizes the upward trend. The landmark building was valued at 73.2 billion yen when it was reappraised in March 2002. Its current market value must have doubled in the 16 years since, given the higher rents after its redevelopment, according to Takashi Ishizawa, a senior researcher at Mizuho Securities.

Mori Trust has a much smaller portfolio, but its value has risen sharply nonetheless. Its commercial properties were estimated to be worth 1.2 trillion yen in total in the year that ended in March, 2.2 times their overall book value.

The company's "Akasaka 2-chome Project," which has been designated as a development project under the government's National Strategic Special Zones program, is expected to be completed in fiscal 2024.

Even if the market values of these properties were to fall by half, they would still be worth more than their value on the books.

Sumitomo Realty & Development has long maintained a policy of never selling the properties it develops. The company's portfolio is the second-largest after Mitsubishi Estate's, and was valued at 5.7 trillion yen in the year through March. Tokyo's population is expected to peak in 2025, after which the Japanese capital could find itself with a glut of office space.(Photo by Akira Kodaka)

Sumitomo has about 220 office buildings in Tokyo, more than any other developer. More importantly, 89% of the office buildings are located in seven of the city's central wards, where there is high demand for office space, and both rents and asset values have risen steeply.

The company's Osaki Garden Tower in Shinagawa Ward, which opened in March, is a typical example of its strategy of buying large tracts of land first and then developing office buildings and surrounding residential areas together.

But every bubble has to burst at some point, and properties prices that are higher than book values while the market is up could plunge.

Many analysts warn that demand for commercial properties and hotels will weaken after the Olympics. They also point to the possibility of an oversupply of office space in the Japanese capital.

In 2020, Tokyo's 23 wards will gain 1.68 million more sq. meters of new  space in large office buildings, the highest level since 2012, according to a survey by Mori Building.

The city's population is projected to peak in 2025. When the working population begins to decline due to the shrinking number of children and wider use of artificial intelligence, Tokyo could find itself with a significant glut of office space.

Developers may be enjoying the pre-Olympic party for now, but without effective long-term strategies, there could be more than a hangover in store.