MUMBAI -- India's software service exporters have done well throughout the COVID-19 pandemic as companies the world over rushed to upgrade technology. But as demand for IT professionals rises, tech giants such as Infosys and Wipro are facing higher staff attrition.

Bengaluru-based Arka Bagchi, who works for a top IT company, is moving to a smaller outfit where he has been offered a higher salary. After he tendered his resignation, the bigger company offered him an overseas position, which he rejected.

"They were not willing to offer me the salary hike I deserved while keeping me posted in India. So, despite the size of the company being smaller, I took up their offer as I saw scope for growth in the organization," Bagchi said.

This scenario is playing out at all the top four information technology companies -- Tata Consultancy Services, Infosys, HCL Technology and Wipro -- where the attrition rate was in the range of 7.2% to 15.2% in the year ended March.

During the January to March quarter, Infosys' attrition rate increased to 15.2% from 10.0% in the previous three months, while Wipro had a rate of 12.1% on employee strength of 197,712 people. Infosys has a roster of 259,619 employees as of the March quarter. HCL and TCS, though, managed to keep their attrition rates in single digits of 9.9% and 7.2%, respectively.

"Attrition has picked up, largely reflecting a strong demand environment, but we remain confident of our employee engagement initiatives, vast talent pool and training capabilities to ensure seamless execution," said Infosys Chief Operating Officer Pravin Rao in an online news conference on April 14. Infosys said its attrition rate rose to 15.2% in the January to March quarter, from 10.0% the previous three months.

As companies shift their workforces online due to the pandemic, Indian IT companies have reaped record profits since the December quarter. They now expect the digital transformation that companies had undertaken to be completed in two years, an acceleration from the three to five years they had previously expected.

Wipro said in an earnings statement last month that it expects sequential growth of 2% to 4% in its IT services revenue to $2.195 billion to $2.238 billion. 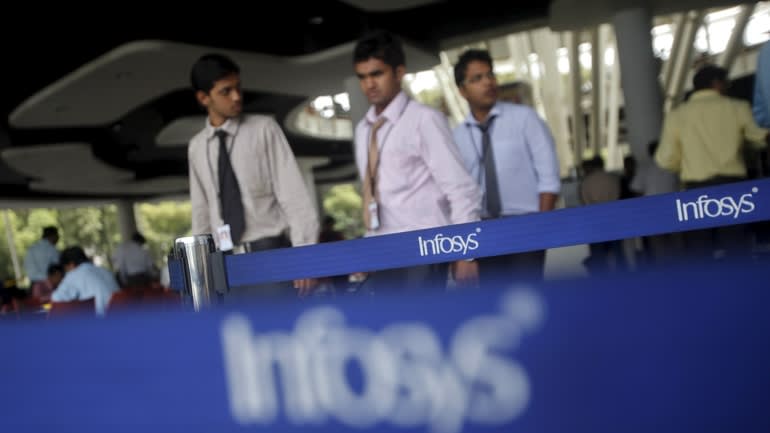 Infosys says its attrition rate rose to 15.2% in the January-March quarter, from 10.0% in the previous three months, amid a surge in demand.   © Reuters

The growth in the sector has also prompted companies to hire more staff and increase pay to retain talent. Earlier this month, TCS said it had increased salaries on April 1, its second such announcement in six months. Infosys announced in October a decision to roll out promotions and pay raises, starting in January.

All four companies reported buoyant results. Market leader TCS reported a 0.26% rise in annual net to 325.62 billion rupees ($4.3 billion) for the year ended March, thanks to a strong last quarter. Full-year revenue grew 3.72% to 1.67 trillion rupees from a year ago.

However, these profits were already factored into the companies' share prices. Shares of TCS declined by 4% the day after the earnings announcement in mid-April, and have fallen by around 10% since then. Shares in Infosys and HCL also dropped after their latest earnings announcements. Such falls are in part due to concerns over increasing human resource-related costs.

HDFC Securities Analyst Apurva Prasad reckons that hiring among companies has been, and will continue to be, robust in the coming quarters because of increased demand for talent as well as to cover vacant positions.

"[Attrition] is in a way a good problem to have," he said. "The companies that have historically kept attrition in check will be in a better position, because of much better talent practices or scope to grow as well as the brand strength."

Companies, however, face higher costs and a squeeze on margins if they have to pay more to retain staff and expand their workforce.

"Some companies that have raised wages once will be under pressure to do so again and at higher rates, which of course increases costs for companies and has a subsequent impact on margins," said an analyst, who did not want to be named.

Actually, in a May 13 report, Nomura Global Research said earnings before interest and taxes (EBIT) margins at Tier 1 IT companies were down around 50 to 260 basis points, primarily due to wage hikes, higher subcontractor costs and higher headcounts, partly offset by a rise in offshoring and elevated levels of utilization. "Wage hikes impacted EBIT margins to the tune of about 50 to 130bps across Infosys, HCL and Wipro," it said.