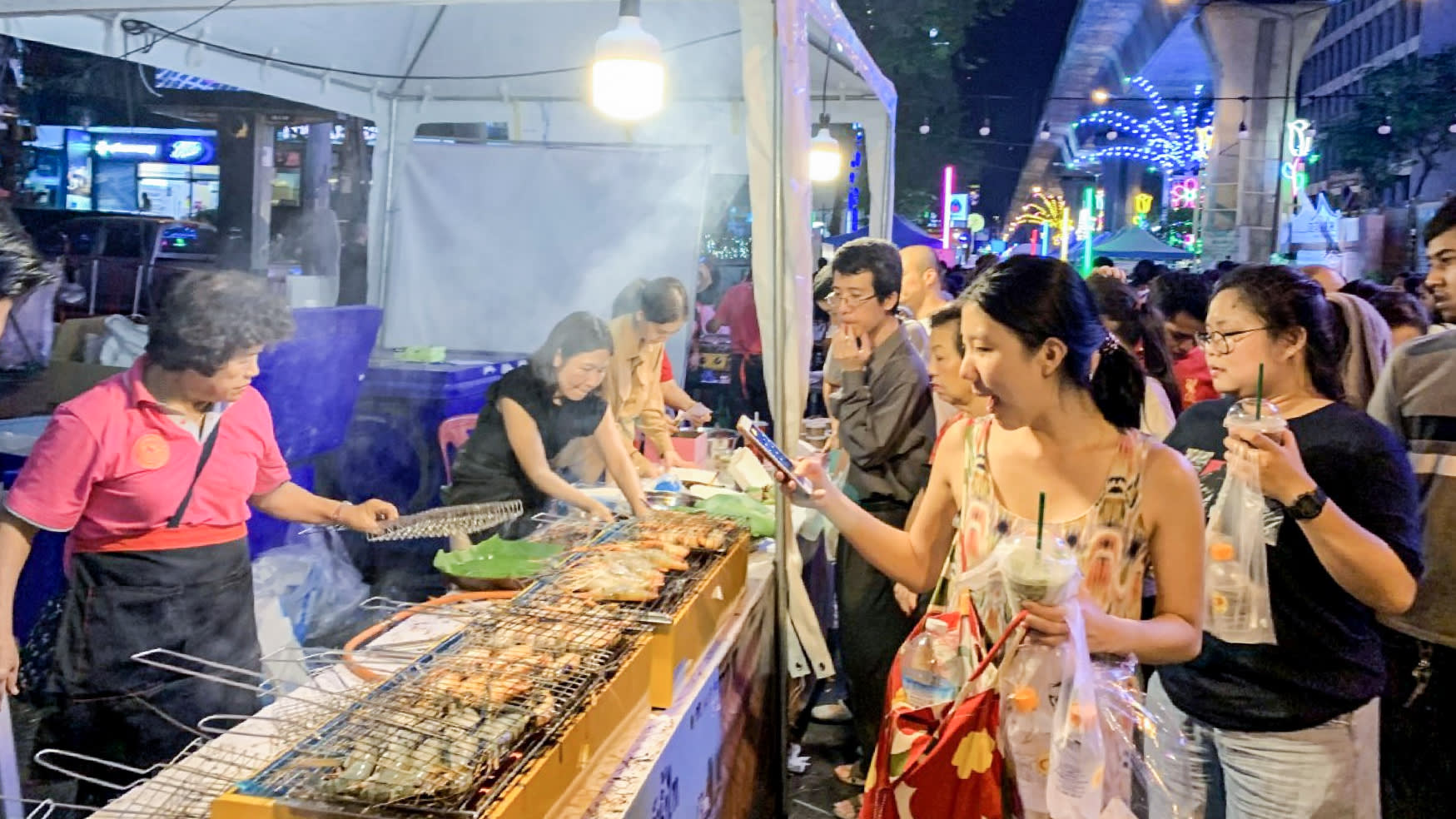 BANGKOK -- Traffic-free pedestrian zones have been reintroduced on main avenues in the Thai capital after a suspension of about four years in hopes of invigorating an economy hit by a tourist spending slowdown.

Thailand's tourism industry has been negatively affected by a global economic slowdown and a higher baht. The number of street stalls has been decreasing in Bangkok as urbanization progresses rapidly. Offering a taste of Southeast Asian life, the reinstated pedestrian zones have proved popular with tourists.

The Silom Road, located in a busy business district, was cleared of the cars that jam the main avenue on weekdays and was abuzz with crowds of tourists on a Sunday last December. The street was lined with stalls on either side, set up close to each other and selling local specialties of broiled chicken and noodle-based dishes.

Traditional dances and music were performed on a makeshift stage, giving the street a festival-like air.

A 28-year-old tourist from Hong Kong, who gave his name only as Alex, said the opportunity to taste lots of different local foods was particularly satisfying, as he munched tropical fruits.

The pedestrian zones, which were opened in mid-December under the authorization of the Bangkok Metropolitan Administration, are marked out every weekend. A Chinatown and the Khao San Road, a popular destination for backpackers, are two other areas of the city that are closed to motor vehicles. The weekend pedestrian zones will continue until May. 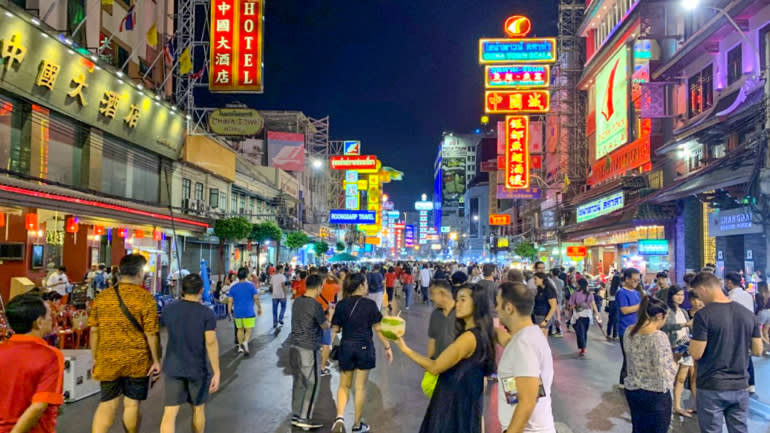 A main street in Bangkok's Chinatown is closed to motor vehicles on weekends until May, becoming a bustling commercial area popular with tourists. (Photo by Yohei Muramatsu)

In their previous incarnation, Bangkok's pedestrian zones were designated mainly during the dry weather season between November and February, when tourism peaks in Thailand. They had last been held in January 2016. The death of King Bhumibol Adulyadej in October the same year and the mourning period that followed are believed to have led to their suspension.

But a slump in tourism has prompted their reintroduction. About 30% of inbound tourists to Thailand are Chinese, whose spending dropped as their domestic economy slowed amid the U.S.-China trade war. Thailand's tourism was further hit by a stronger baht against the dollar to levels unseen in the past six years or so, making Thai tourism relatively more expensive.

Thailand remains a popular destination, with foreign tourists increasing 4% from a year earlier to nearly 40 million in 2019. On the other hand, tourism revenue appears to have failed to reach the annual target of about 2 trillion baht ($66.6 billion), with the figure for the first 11 months of the year totaling 1.74 trillion baht.

The reintroduction of pedestrian zones was aimed at supporting the tourism industry, which comprises mainly small business operators. "The pedestrian zones are great for our business," said a man selling broiled chicken from a stall in Silom. "Because otherwise pedestrians decrease on Sundays."

Street stalls are a key part of Thailand's culinary culture, but they have been decreasing in number over recent years, due partly to the Bangkok administration's initiative to stop them from blocking roadways and sidewalks -- a measure also motivated by concern over their sanitary conditions. As a result, the number of registered street stalls decreased to 8,500 in 2018 from about 20,000 in 2013.

The reinstated pedestrian zones are seen as a testing ground for how Thailand's traditional tourist attraction can survive amid the urbanization of its capital.