Concerns about a cardboard shortage are growing in Japan, amid surging used paper exports to China.

TOKYO -- As anxiety grows over the fallout from the U.S.-China trade war, it has emerged that even the cardboard used to package the affected products risks falling victim to disrupted supply chains.

Japanese manufacturers face a shrinking supply of the used paper from which cardboard is fashioned, as China, the world's largest producer, has switched its source of supply from the U.S. to Japan.

Chinese manufacturers are importing massive amounts of used paper from Japan, causing domestic supplies to run short. Some types of paper are out of stock entirely.

With exports to China growing briskly, many cardboard manufacturers and buyers are worried, given the material's importance in the distribution of countless products.

Industry insiders say the lucrative exports to China are likely to continue rising. But that is raising concerns among domestic papermakers. "If exports to China keep growing at the current pace, there will be a shortage of used paper," warned one executive.

Japan is expected to collect 11 million tons of used paper this year, while domestic paper manufacturers will need close to 9 million tons, according to estimates by the Kanto trade association. In other words, if exports do not exceed 2 million tons, supplies will be adequate.

But Japan's used paper exports for the first nine months of the year reached 1.5 million tons, while the monthly average for the five months through September surged 40% from the year-earlier period to 200,000 tons. That translates to an annual rate of 2.1 million tons, raising the prospect of a supply crunch.

"Some cardboard plants are operating while dealing with uncertainty about daily supplies of used paper," said Goro Fukushima, an executive at Oji Materia, Japan's largest cardboard sheet manufacturer. Although the company has not been affected by China's used paper buying binge so far, Fukushima is worried about future supplies.

The growing shortage of used paper forced Rengo, the No. 2 manufacturer, to cut production in September. The industry has seen stocks run out for certain types of base paper used in cardboard known as nakashin.

There is one further reason for Japan's cardboard crisis: tighter environmental regulations in China.

In 2017, China produced 47.2 million tons of base board paper, five times more than Japan.

This year, the administration of Xi Jinping set tougher limits on impurities in imported used paper. That has increased demand for used paper from Japan, which is higher in quality than that from the U.S. or Europe because waste is more carefully sorted in Japan.

In May, China temporarily imposed a ban on imports of U.S. waste paper, which failed to meet the new purity standards. Then, in August, Beijing slapped a 25% tariff on such paper in retaliation for U.S. President Donald Trump's duties on a wide range of Chinese imports.

These moves have fueled demand in China for Japanese used paper. China has bought more than 70% of Japan's used paper exports so far this year, causing prices to soar.

Export prices quoted by an association of used paper wholesalers in the Kanto region that encompasses Tokyo reached an average price of 27.5 yen (24 cents) per kilogram in October, jumping 43% from January and near the record high of 27.7 yen set in July 2017.

Rising export prices of used paper are spilling over to the domestic market. Japanese manufacturers in October announced price rises for base paper used to make cardboard boxes. They are urging used paper wholesalers to avoid increasing exports to ensure sufficient domestic supplies. 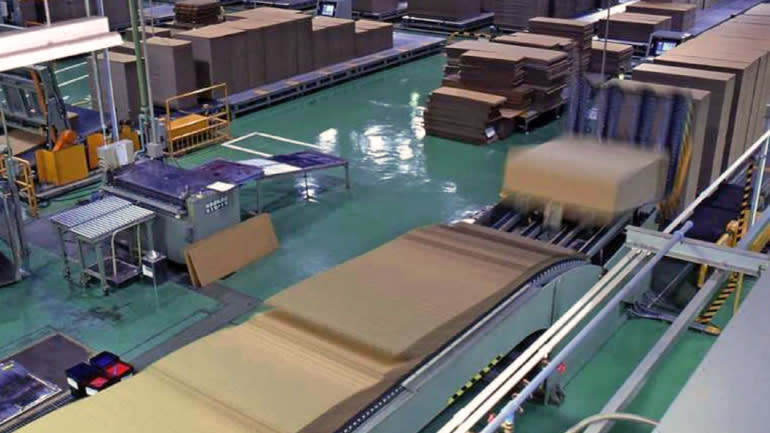 An Oji Materia plant in Sapporo, Japan: Although the company has not yet been affected by the jump in Chinese imports of used paper, concerns are growing about future supplies.

Wholesalers are disgruntled. Early this year, paper makers slashed their purchases of used paper as inventories swelled. Wholesalers responded by exporting their way out of trouble. Now they are being told to reverse course.

"Paper companies tell us to export more when there is a glut of used paper and ask us to provide more to them when there is a shortage," said an executive at a used paper wholesaler in Tokyo. "They keep making such one-sided demands."

But manufacturers also have gripes. They say they have worked with wholesalers for years to support an industry program aimed at stabilizing prices and protecting the financial health of wholesalers and the recycling system.

Each one-yen rise in the price of used paper cuts the paper industry's profits by about 10 billion yen. Pulp is not an economical alternative. "We are having a hard time securing sufficient supplies of used paper, even though we are offering higher prices," said an executive at a manufacturer.

"We cannot deal with a situation where the supply shrinks when demand is strong," said Ichiro Hasegawa, executive vice president of Rengo. "We hope wholesalers will curb exports to maintain the recycling system, secure a stable domestic supply of cardboard products and prevent disruptions in the distribution system."

The rapid growth of e-commerce in Japan has pushed up demand for cardboard. The Japan Corrugated Case Association predicts domestic cardboard demand will hit a record high in 2018 for the third year in a row.

Plants making base paper ran at 93% of capacity in 2017 to meet this surging demand. To make matters worse, plant and equipment are aging because of delays in capital investment. Any serious disruption at a plant could cause an immediate supply shortage.

Cardboard box buyers are also worried. An executive at a major online shopping company said the company is switching to alternative packaging. Many companies are bracing for a squeeze, even as the year-end shopping season draws near.