Travelers beware: Japanese inns now taking vacations of their own 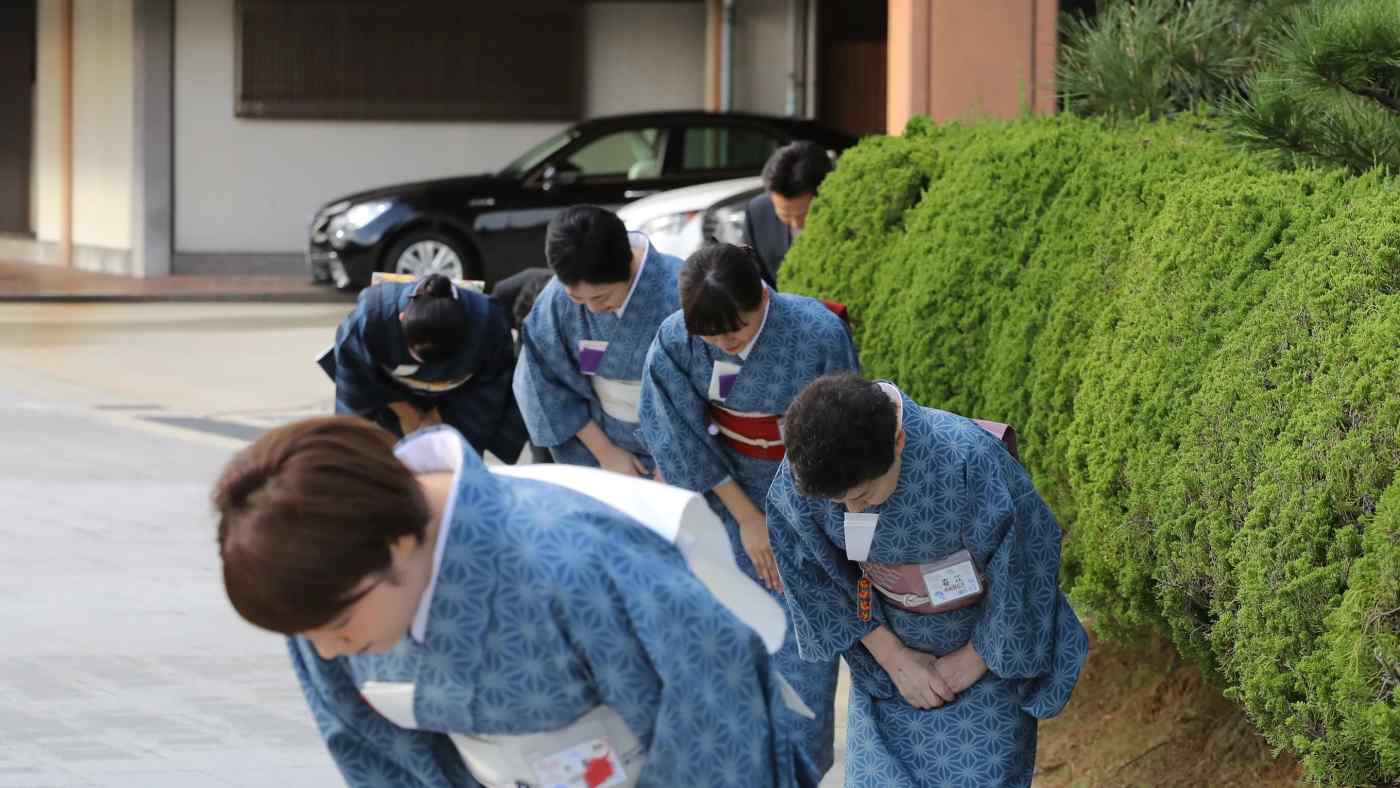 Kagaya employees bow to departing guests: Workers who spend most of the year pampering customers at Japan's traditional inns are being told to take some time for themselves. (Photo by Masayuki Konozo)
YUKI KESHIBA, Nikkei staff writerJuly 15, 2019 14:25 JST | Japan
CopyCopied

TOKYO -- Japan's ryokan hotels typically operate all year round, but that tradition is giving way to a new trend that takes into account the country's severe labor shortage.

Bottom line: More ryokan are closing for a certain number of days every year.

They are already reaping unexpected benefits.

In the city of Komoro, Nagano Prefecture, Hishino Onsen Yakushikan is now closed on Mondays and Tuesdays in winter, when business is slow. During the rest of the year, it closes on Tuesdays, except during the Golden Week string of national holidays from late April to early May and during the Bon festival in August.

The move has allowed the ryokan to reduce staff overtime on an annual basis, raise salary levels and to boost its net profit about 30% for the year through May. Contributing factors include significantly lower utility bills and an improved average rating on a travel website, which the ryokan attributes to improved employee morale.

Ryokankeepers were not chasing fatter profits when they decided against operating for 365 days a year. They actually had their hands tied.

Workers in the country's lodging industry often find it difficult to take days off. This feeds a reputation that has caused many ryokan to be seriously understaffed.

According to the country's Ministry of Health, Labor and Welfare, the ratio of job openings to applicants in the hospitality industry is 3.97, compared to 1.38 for all industries.

The lodging industry is known for its long working hours, early morning and late night shifts. Its turnover rate is high. The new closing days are meant to help inns and hotels become more desirable among prospective workers. A new law that caps overtime hours at 100 per month and mandates fairer treatment of employees helped convince this Japanese-style inn in Ishikawa Prefecture to close for 12 days a year.

Kagaya Group, which has ryokan in Ishikawa Prefecture's Wakura Onsen resort, has joined the trend of bowing out of business on some days.

The group is closing its five ryokan for 12 days a year that typically bring in few guests, like during the traditional low season from January to February. Kagaya's 200 or so front desk and service workers are given these days off.

Kagaya staged a trial run last year, closing its ryokan on certain days. It officially introduced the system this past April, when a "work style reform" law took effect capping overtime hours at 100 per month and mandating fairer treatment of employees.

Yutaka Kosaki, the group's managing director, said the company aims to showcase its work style reform effort in the hope of attracting employees.

At the Nishiura Onsen resort in the central Japanese prefecture of Aichi, Tenkukaiyu No Yado Suehiro in June began closing on Tuesdays, Wednesdays and Thursdays, when few guests stay at the inn. Everybody is off on these days except for reservation-center staff.

During the past five years, the ryokan's occupancy rate has hovered at around 50% on these midweek days. The inn has also introduced other measures to improve profitability. Staffers now have more responsibilities than before, and day-trippers are catered to with expanded services.

The inn does not plan to lower wages.

Western-style hotels outside Tokyo are also cutting their days of operation. Next year, Shiroyama Hotel Kagoshima, in the southwestern city of Kagoshima, is scheduled to be closed on Feb. 18-19. These days traditionally have low occupancy rates and come after Lunar New Year, when vast hordes of Chinese tourists come to Japan.

It will be the first time for the hotel's operation to come to a complete halt. In the fiscal year that starts next April, the hotel plans to close for a total of five days. Besides the days off in February, it will hang out the "closed" sign in July, before Japan's traditional high travel season.

Takinoyu Hotel in Yamagata Prefecture's Tendo Onsen resort next month will introduce a system allowing employees to take personal days and skip work on occasions such as family members' birthdays.

The facility in 2015 started to close on some days. Currently, it is closed for 12 days a year. The new system is an expansion of an earlier benefit allowing employees to take their birthdays off. The birthday perk was introduced last year in response to employees who said they might feel less inhibited to take a day off if the innkeeper were to pick a specific purpose for a holiday.

In the Nagano Prefecture city of Suzaka, Seni Onsen Iwanoyu closes for 35 days a year.

"You want to take special days off, whether you are a customer or an employee," President Tatsumi Kanai said.

The ryokan, whose pampering of guests has made it popular, now operates at over 95% occupancy throughout the year. And Kanai says he has not felt the effects of Japan's labor crunch.

"I don't particularly feel we are short-staffed," he said, "because we have many young people" who work hard.