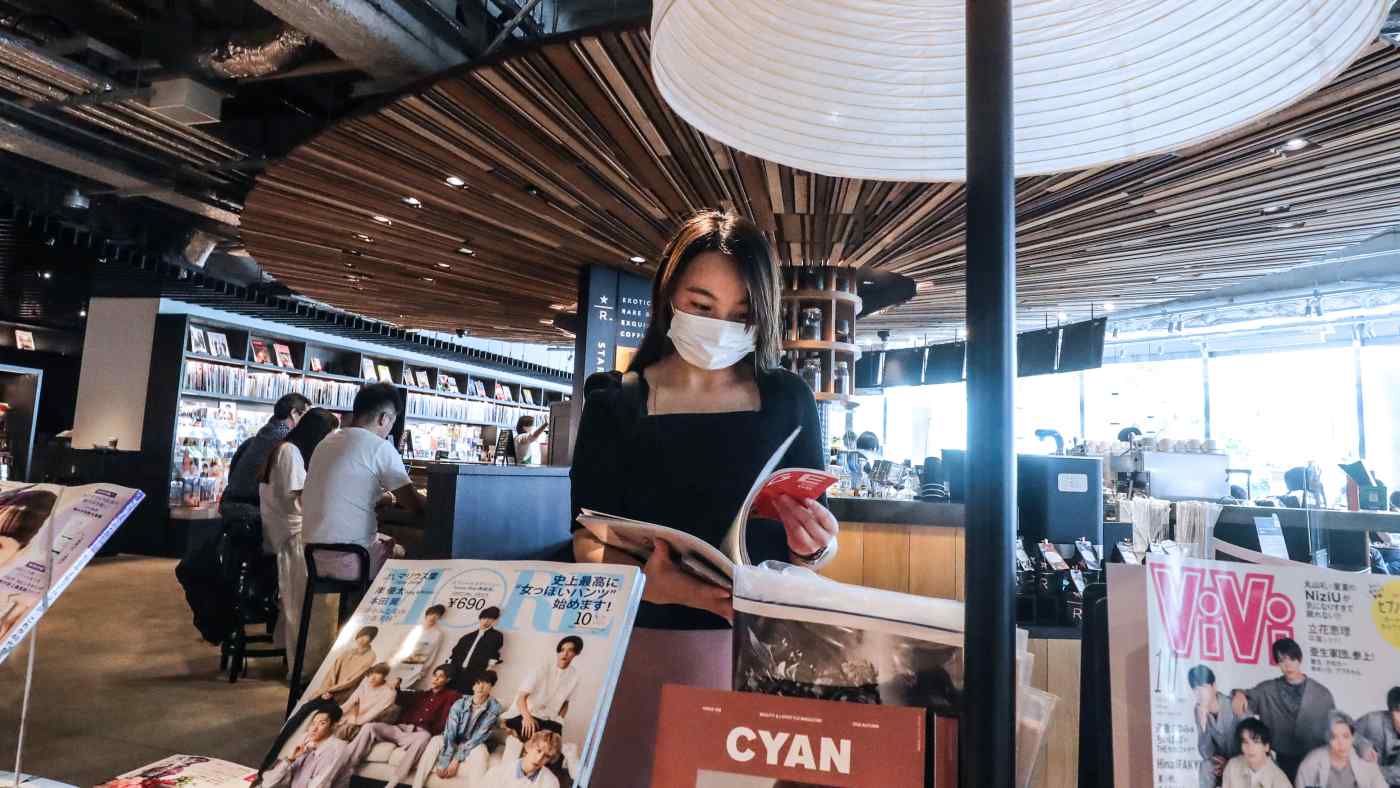 Japan's Tsutaya Books has expanded over the last decade, establishing itself as a venue where people can hang out. Now the company is looking to China for new growth opportunities.  (Photo by Ken Kobayashi)
JADA NAGUMO, Nikkei staff writerDecember 22, 2020 13:00 JST | Japan
CopyCopied

TOKYO/HANGZHOU -- In a commercial center the size of New York City's Grand Central Station, Japan's latest assault on the vast Chinese consumer market is a consciously chic bookstore scattered with sofas and works of art.

Tsutaya Books opened at the Tianmuli, or Maison Moree, mall in Hangzhou, an hour from Shanghai, in October, crammed with the refined touches that have made the chain a favorite in its home country -- plenty of sofas and chairs to encourage customers to have a leisurely browse among its books, magazines and other knickknacks.

On one of its two floors, a cafe and restaurant allow shoppers to enjoy a cup of coffee or tasty food while reading. An exhibition of Japanese artist Kohei Nawa's collection of contemporary sculptures embellished the shop's opening days.

"Chic and cozy," was the verdict of a student from nearby Zhejiang University. "We hope to draw in people who look for different types of experiences that suit their lifestyle," said a shop attendant.

Since its opening, the store has attracted a large number of customers, with daily visitor numbers averaging 7,000 on weekdays and 10,000 on weekends. This month Tsutaya is set to open a second China store in Shanghai's Changning District. 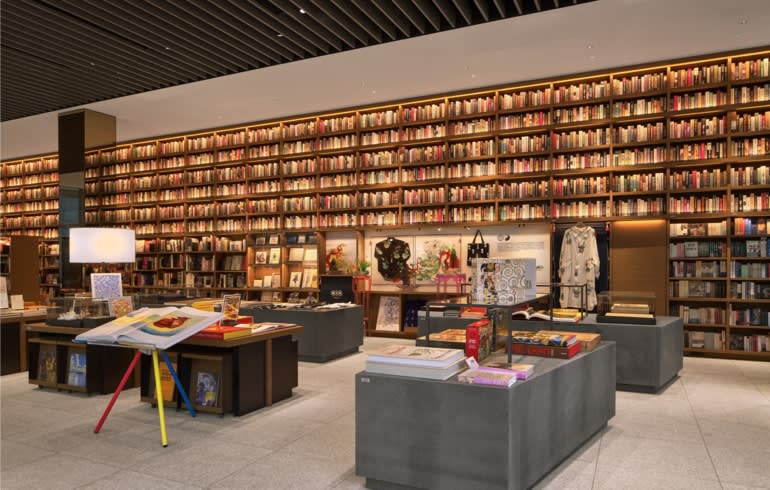 In expanding overseas, Tsutaya hopes to prove the success of its seemingly counterintuitive mission, which is that the art of selling books can be reinvented and repackaged to thrive even in an era dominated by the massive financial muscle of Amazon.

The bet placed by Muneaki Masuda, Tsutaya's founder, is that for many customers, shopping is as much about the experience as the purchase. "Department stores, convenience stores, and platforms like Amazon are no longer what makes people happy. What is important is the content that is being offered," Masuda told Nikkei in a 2017 interview.

His vision was apparent when Tsutaya opened the first of its new breed of bookstores in Daikanyama, often described as the Brooklyn of Tokyo, in 2011. Its library of books, collection of goods and cafe space has drawn trendy students and affluent buyers who want to spend some leisure time.

Since then the Tsutaya Books chain has expanded to 20 locations while the number of stores operated by Culture Convenience Club, Tsutaya's parent company, has reached over 1,000, including other brands like its CD and DVD rental chain, known simply as Tsutaya.

Over the years, major bookstore chains have fallen victim to the emergence of Amazon and other e-commerce sites. In the U.S., Barnes & Noble was acquired by investment company Elliott Management in 2019 after the mega-chain struggled through multiple CEOs and business strategies as sales continued to drop.

In Japan, too, the number of bookstores has been on a steady decline, with more than half going out of business in the last 20 years. Data by major book wholesaler Nippon Shuppan Hanbai reveals that the number of book purveyors in the country has declined to under 10,000. In 1999 there were more than 22,000.

CCC was also facing disruption from the likes of Amazon following the spread of the internet and emergence of online streaming services. But, confident in his book retail plan, Masuda led a 70 billion yen ($663 million) management buyout and delisted from the Tokyo Stock Exchange in 2011. 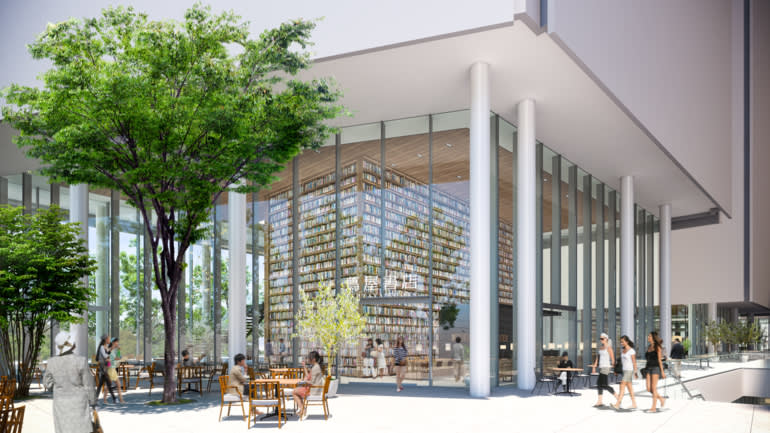 In the digital era, Tsutaya Books has pursued its vision of offering "real life experiences," asserting that its main purpose is to offer consumers suggestions on new lifestyles. "We are not selling products but lifestyles, and bookstores are indispensable in doing that," Masuda explains in Yoko Kawashima's 2015 book "The Mystery of Tsutaya."

This motto has kept the bookseller relevant and inviting for many consumers in Japan -- and it's now taking it abroad.

"We wanted to launch a store in an art-centered facility," Tomohiro Umetani, vice president and chief operating officer of Tsutaya Books, said in an interview with Nikkei Asia. "Since China has a large population, the place was very attractive in terms of location as well as trade," Umetani said.

Scenic Hangzhou hosts the headquarters of major companies including Alibaba Group Holding and is also close to China's financial hub Shanghai. "Some local people have told me it is like Kyoto," Umetani noted, referring to one of Japan's popular tourist destinations and a renowned cultural beacon.

Following its China openings, the bookseller is also looking to expand into other areas, raising Taiwan and the U.S. as attractive possibilities.

"Potential locations could be countries with large populations, for example Indonesia," said Umetani. "However, we must conduct necessary research... before we make a concrete decision." Tomohiro Umetani, vice president and COO of Tsutaya Books, speaks in an interview with Nikkei Asia. (Photo by Yuki Kohara)

The expansion into China creates a new set of concerns for Tsutaya, considering China's conservative nature and strict book censorship.

"There are risks wherever you go," said Umetani. "We were able to find a local partner who shared the same vision as us and we got along, so we are not worried." But he did acknowledge that operating in China is a different proposition.

"It will be somewhat difficult as books that are imported into China will go through censorship inspection. Publications on religion or obscene content will be cast aside," he said.

In Japan, the company is faced with navigating the spread of the coronavirus, as many retailers continue to reduce store hours and struggle to draw in consumers who are choosing to stay home and shop online.

"The business is, of course, hurting," Umetani acknowledged. "Sales in areas that relied on foreign tourists are declining," he added, pointing to its new store that opened in Haneda airport's international flight terminal in March. The establishment has been closed temporarily since April when Japan declared a coronavirus state of emergency that eventually ended in May.

On the other hand, Umetani said a surge in demand for home entertainment, including books, manga, board games and DVDs, has supported sales. The bookstore also began selling new items like face masks, which have been popular with consumers.

In March, the company reopened Tsutaya Books Roppongi, one of its main branches, after a renovation. The store opened with a brand-new look, in which fashion and art books fill the displays while a bar lounge has been placed on the second floor to provide office workers and shoppers a relaxing space.

In a bid to strengthen its content, CCC has accelerated partnerships and even takeovers. The company has acquired Tokuma Shoten, a publisher with a strong background in anime and other entertainment content, as well as Shufunotomo, publisher of books and magazines for women. The acquisitions have enabled Tsutaya to collaborate with the publishers and produce exclusive content for its bookstores. For example, with the help of Tokuma Shoten, CCC produced a novel based on the movie "The Lies She Loved" ahead of its 2018 cinema premiere and sold the book at stores. 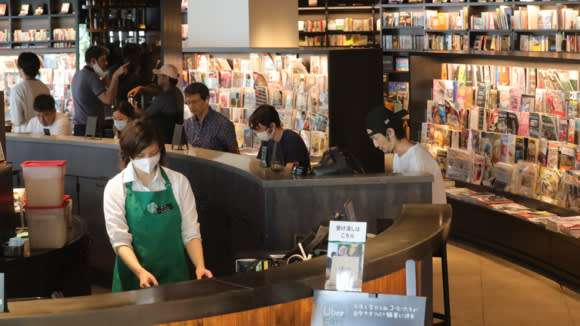 But the bookseller knows that it cannot beat Amazon and other platforms in terms of convenience.

"What we can do is foster communication within our stores and offer valuable experiences to consumers," said Umetani.

Employees called concierges select the books and magazines that will be sold at individual stores. The experts offer recommendations to customers and are even in charge of the way contents are displayed. As a result, each Tsutaya store can showcase a distinct personality and offer a different type of ambience depending on the location.

While Tsutaya's Ginza store in Tokyo, like its Hangzhou store, is focused on books and other products related to art, the concierges at its store located in Futako Tamagawa, on the northeast bank of Tokyo's Tama River, are experts on electronic products.

"For retailers, new value propositions are crucial in an age where Amazon and other e-commerce sites like Japan's Rakuten already provide convenience," said Minoru Fukuda, a partner at the Tokyo office of global consultancy Roland Berger. "Tsutaya has been very good at providing lifestyle suggestions through its stores, which is also an important value proposition," Fukuda said.

CCC has struggled financially in recent years, mainly as its rental store business dwindles. According to the official government gazette, the company recorded a 2% decline in sales to 353 billion yen for the fiscal year ending March 2020, while operating profit dropped 38% to 9 billion yen. The coronavirus has likely put further downward pressure on sales this year.

"For bookstores in general, although the pandemic has been beneficial in a sense that it has boosted demand for books and other home entertainment products to an extent, the acceleration towards using e-commerce sites will definitely impact industry players," said Akira Morita, managing director and partner at Boston Consulting Group in Tokyo.

CCC, however, sees potential even in the midst of COVID-19, saying that the public health crisis has reinforced the importance of face-to-face contact and authentic experiences.

"The pandemic has led people to seek out real human interactions. Meeting people and communicating only through online meetings just isn't enough," Umetani stressed, and in a show of confidence for the future, added: "This will allow us to show our strength and potential as a real bookstore."