Tweets by Asian CEOs help to anchor employees amid COVID

Over 90% of India, Singapore workers expect top execs to engage on social media TOKYO -- When Apurva Purohit joined Twitter in 2012, it was mainly a market research tool. As president of Jagran Prakashan, one of India's largest media companies and publisher of the Times of India, she wanted to understand the new generation of digital consumers.

But as India entered a monthslong lockdown last March, Purohit turned to social media to connect with employees and investors she could no longer see in person. On LinkedIn, she shared books and articles that guided her thinking on her company's shift to telework, as well as columns she wrote on managing cash flow and investing in human resources.

Purohit thinks her regular posts allowed Jagran's stakeholders to see a different side of her. "My employees possibly only see me as a manager, and my investors see another facet of me, how I run the business and deliver profitability," Purohit told Nikkei Asia.

"Running a business/organization was always hard. Well, with COVID-19, it's just gotten even harder," she wrote on LinkedIn in April, sharing her own struggle with insomnia as the lockdown dragged on.

Purohit was among a small group of Asian executives recently named by Brunswick Group as part of its annual Connected Leadership report.

The report is based on a Brunswick survey that asked 5,200 financial readers and 6,500 employees of large corporations in 13 countries and territories, including China, Japan and India, what information they expect from CEOs and how they want to receive it, especially in times of crisis.

As remote work and business uncertainty rose last year, employees, investors and customers alike increasingly sought direct interactions with company executives. The report found that over 90% of employees in India, Singapore and Hong Kong said they expected executives to communicate via social media during a crisis, all at higher rates than their Western counterparts.

"This is the first time our survey has included Asian markets, and the findings are both surprising and highly relevant to the current moment," said Craig Mullaney, partner at Brunswick.

Although the survey did not include Thailand, the chief executive of its largest conglomerate made the Brunswick list. Suphachai Chearavanont started posting on LinkedIn in March, as the spreading virus pushed CP Group's 360,000 global employees out of their offices.

He took to LinkedIn to promise that CP would not resort to layoffs due to COVID-19, and announced that medical costs for infected employees would be covered by the company. The post was his most liked of 2020, receiving hundreds of reactions and comments.

Jagran's Purohit also used social media to check in on her employees in lockdown. "Do you think there is any employee who is looking low on those Zoom calls? Can we check on her?" She wrote to managers on LinkedIn.

The higher stakes for company executives make many hesitant to engage on social media to appeal mainly to millennials, those born between 1981 and 1996, and to Gen Z, the group that followed, born mostly in the 2000s. Among Japanese CEOs, only 11% had a LinkedIn profile, while only 15% of individuals from the TOPIX Core 30 and Large 70 engaged on social media, according to Brunswick's previous report.

When he posts to Instagram or LinkedIn, Adrian Cheng, CEO of Hong Kong's property company New World Development, straddles the line between the government and local youths, largely pro-democracy consumers.

Even before the pandemic began about a year ago, Cheng used social media to shift his family's 50-year-old retail, real estate and transportation empire to focus on the millennial market, tagging his posts with buzzwords like climate change and sustainability.

As the retail and travel industries bore the brunt of the pandemic, Cheng took to LinkedIn to share sales recovery updates at the company's malls across China. His posts also kept readers abreast of the company's production and donations of medical masks to help relieve Hong Kong's shortage. 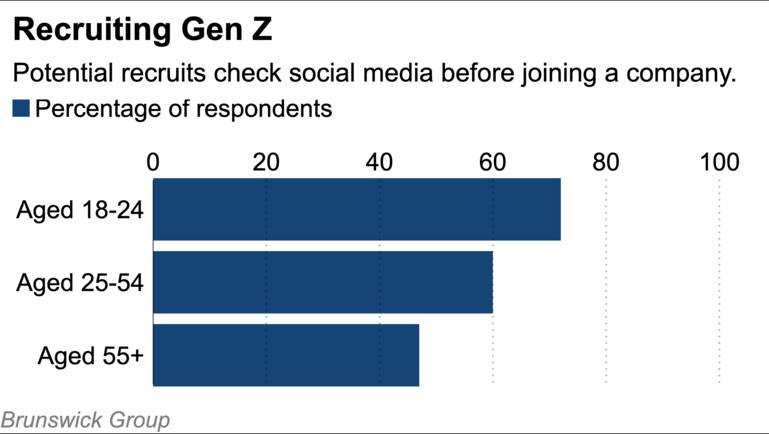 A few minutes of perusing the daily online discourse can also lead to new customers. Noticing a trend of unemployed people starting their own businesses, Purohit instructed her team to create advertising options for small-scale makers of baked goods or embroidered saris.

"These microentrepreneurs won't be able to pay for the kind of spots that a typical advertiser would charge," Purohit said. "We got a huge number of them signing up to promote their products and brands" on Jagran's 39 radio stations across India, she added.

As the pandemic stretches into 2021, social media may grow more critical for business leaders looking to attract and retain talent and customers. Purohit says the next generation of employees and consumers are turning to social media to learn about an organization's reputation and values.

But social media in Asia has also recently been subjected to government pressure.

Twitter, for example, blocked some accounts belonging to activists in India on Monday following a request from the government related to protests by local farmers against agricultural reforms by the administration of Prime Minister Narendra Modi. And Vietnam last year warned Facebook that its service would be shut down in the country if the company did not agree to tighten content restrictions.

Despite such headwinds, young people still like to use social media as a tool to collect information. The Brunswick report confirms that 72% of 18- to 24-year-old employees check an executive's social media when considering joining a new company.

"Gen Z and millennials are far more conscious of equality, sustainability, and civic concerns," said Purohit, whose posts that receive the most likes and comments are about women and diversity.

"They are pushing the older management," she added. "They're very conscious about organizations that deliver on these goals."