MUMBAI -- The world's biggest smartphone makers are stepping up their marketing and manufacturing efforts in India as the escalating trade war puts pressure on their operations in the U.S. and China.

After slowly increasing its manufacturing and supply chain presence in India over the past several years, Apple is close to choosing a site for its first retail shop in India, according to a source at the company.

Rivals such as Samsung Electronics and Xiaomi are also strengthening production capabilities and sales channels in the country, however, presaging a fierce battle for the market of 1 billion.

According to the source at Apple, discussions with the government for approval of its store are still ongoing, and the location has not yet been narrowed down to any one city. At present, Apple sells its iPhones through third-party retailers such as Nyasa and Maple Stores and has online partnerships with Amazon India and PaytmMall.

Apple CEO Tim Cook discussed the plans earlier this month, telling investors that the company was "working with the government to seek approval" for a store opening.

The company is also planning to expand local manufacturing. While older iPhone models have been produced at a plant in Bangalore for some years, Apple aims to start making more recent models, such as the iPhone 7, too. Taiwan-based Wistron assembles older iPhones at two sites, while the Indian units of Flextronics of Singapore and Salcomp of Finland provide chargers. China's Yuto Packaging Technology is also now packaging older models, the iPhone SE and 6s, in India.

Apple's move to set up a store in India indicates that the company is now focusing as much on sales as on manufacturing after struggling to crack the Indian market. 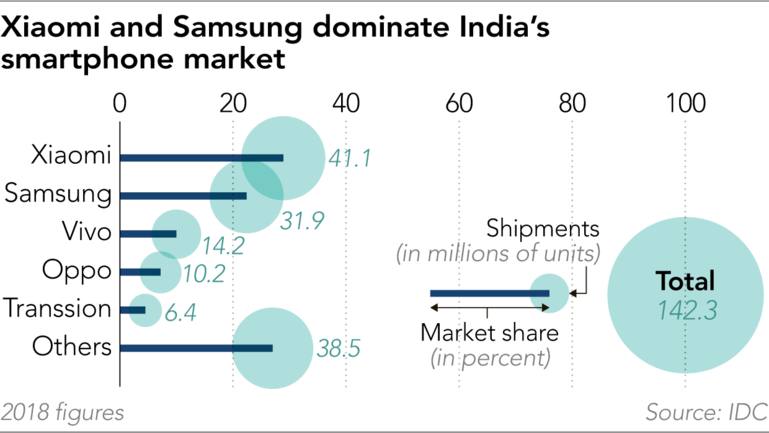 According to research company IDC, Xiaomi held a 28.9% share of the local smartphone market in 2018, followed by 22.4% for Samsung and 10% for Vivo, another Chinese company. Samsung, which dominated the Indian market for several years, lost its lead to Xiaomi about a year ago.

India's stiff 20% import duty on mobile devices makes iPhones in India among the most expensive in the world and is one reason Apple has just 1% of the market there. Local production would allow iPhones to avoid the 20% tariff.

In the bigger scheme, India could also become an alternative base for Apple suppliers planning to move out of China amid the ongoing trade war. Major iPhone assembler Foxconn Technology is ramping up investment in India, including, reportedly, for mass production of Apple phones. According to media reports, Foxconn has already begun trial production of the latest models of iPhones at its plant near Chennai.

The Taiwanese company has poured some $213.5 million into an Indian subsidiary since September in what it describes as a long-term investment in the country.

Samsung, meanwhile, has expanded local procurement in India to include software as it tries to regain the lead from Xiaomi. The South Korean phone maker also opened a mobile factory on the outskirts of New Delhi last July and aims to nearly double the number of smartphones it makes in India to 120 million a year from 68 million by 2020.

Xiaomi uses a unit of Taiwan-based Foxconn to assemble its phones at a total of six facilities in India, and is setting up a seventh facility. The company says that with the new facility its production capacity will go up to three phones per second from the current two per second. Vivo, too, has announced plans to pump in over $573.95 million in India, including for a new production unit.

In addition to manufacturing, these companies are also ramping up sales channels. In a first, Xiaomi is setting up vending machines called "Mi Express Kiosks" that would allow customer to purchase phones using cards as well as cash. The Chinese phone maker plans to have 10,000 retail stores in the country by the end of this year.

One of the key problems facing manufacturers in India is a lack of local companies that are able to supply high-value components, experts say. Most of components are still imported, and only final products assembled in the country.

According to local media reports, after Samsung has set up two component manufacturing units to produce display panels and batteries and is planning to fund local startups to source components from.

However, Tarun Pathak, associate director of CounterPoint Research, expects that to change too. “In terms of suppliers, the component ecosystem has grown, actually, be it chargers, batteries, mechanics or other adjoining categories. But the point is now we have reached a stage where we need to add more high-value component players, like camera models and display panels makers."

With its population of over 1 billion, India presents an opportunity for smartphone makers looking to expand beyond slowing markets such as the U.S. and China. But to do so, they will need to reach beyond India's urban areas.